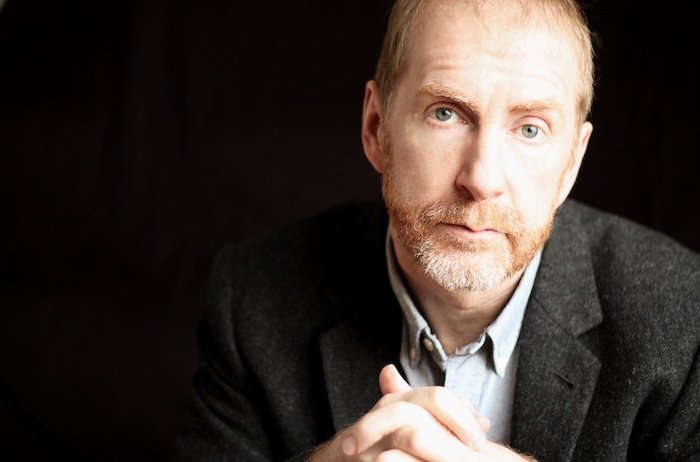 I would not get a lot of pushback if I were to say that Tom Rooney is the best stage actor currently working in Canada. Obviously that’s a subjective assertion, but it’s awfully hard to argue with. He’s massively respected by his peers and beloved by audiences and critics alike. He’s been my personal favourite actor since the 2009 Stratford season when I saw him play an ice-cold Cassius on Saturday night then a sprightly Bowie-ish Puck on Sunday afternoon. He’s been individually nominated five times in the past (winning in 2011 for his legendary Malvolio) and won Performer of the Year twice. He adds another Outstanding Actor nod this year for his brilliantly icky performance in the title role of Stratford’s Tartuffe (soon to make its Toronto debut with Canadian Stage/Crows). Tom Rooney doesn’t give many interviews; I’m so honoured to have him in this series.

Can you remember your first experience with theatre?
My theatrical debut was a production of a play entitled Cat Pie. I played the lead. A man walks into a diner and orders the special: Cat Pie. He enjoys it so much he orders three more pies. Shortly after he develops acute stomach pains, is rushed to the hospital where he undergoes emergency surgery and has a live kitten removed from his stomach. End of play. I was in grade two.

You are one of our most-celebrated performers in the 8-year history of this award. What can you tell us about the following productions?
– 2010: The Winter’s Tale (Best Supporting Actor)
It was the second time I got to play Autolycus and Marti Maraden gave me a lot of freedom to play and to create chaos within the scenes. Autolycus and all of Bohemia serve partly, in my opinion, as a kind of palate cleanser after the cold, ordered world of Sicilia. My job was to create chaos. I had a great time.

– 2010: For the Pleasure of Seeing Her Again (Performer of the Year– WINNER)
For the Pleasure of Seeing Her Again was the first time I worked with Chris Abraham. He made a beautiful show. I had never worked with a director who was so hands on. I found it frustrating at first but, fortunately, he kept hiring me for other jobs and I’ve come to trust him and to be grateful for his incredible brain and his rigour. He has made me a better actor, without a doubt.

– 2011: Twelfth Night (Best Supporting Actor– WINNER)
I wanted Malvolio to be the kind of guy who believed he was, of all the men in Olivia’s world, the most manly, the most virile, the most athletic. I suggested to Des McAnuff, the director, that during the ‘box tree scene”, when Malvolio is out for his morning walk, that he should enter wearing Lulu Lemon pants and drinking juiced greens. Des didn’t agree.

– 2014: Man of La Mancha (Best Actor in a Musical)
I was terrified the entire season that I was going to lose my voice. I lived like a monk. I have so much respect for Musical Theatre performers. I don’t know how they do it. They are athletes!!

– 2015: The Seagull (Outstanding Supporting Actor)
I felt so honoured to be a part of that amazing ensemble. Christine Horne, Phil Riccio, Eric Peterson, Tom McCamus, Yanna McIntosh, Tony Nappo, Tara Nicodemo, Gregory Prest, Bahia Watson. One of my favourite memories from that rehearsal period was when Tony Nappo, playing the estate manager, Shamrayev, who has been out working in the hot sun, decided to make his entrance shirtless. It was a wonderful, bold choice. Unfortunately, he made his entrance about two pages too early.

– 2016: Breath of Kings (Outstanding Actor)
I loved playing Richard II. If there is one part I’d like to do again, it’s that one. His journey from a man/boy- self-centred, scared, lacking in self-awareness- to a man who discovers his humanity only after being stripped of all his power and identity, is a beautiful story. And the poetry is incredibly beautiful.

Your nomination this year is for the title role in Tartuffe. Tell us about the development of that performance and how the modernization factored into your interpretation.
Chris Abraham brought together a group of actors the summer before we started rehearsals for Tartuffe and had us read two versions of Tartuffe. One was the Richard Wilbur version, which was written in Iambic pentameter, and the second was a version written by Ranjit Bolt, which was set in a tetrameter, meaning it had only four strong beats in a line compared to 5 used by Wilbur. Moliere used Alexandrine, or 6 beats per line. Bolt’s version was much more contemporary in the word choices he made, and along with the shorter verse line, it sounded a lot more contemporary. Chris had a feeling that he wanted to bring it closer to a modern audience, both in the look of it and the sound of it so we chose the Bolt version. This was all before Trump had even been elected. By the time we started rehearsing, Trump was in office and Chris had the idea to set it in a time just ever so slightly in the future; a world in which Trump-ism was well established and even affecting the language. He was also interested in the character of Tartuffe being a foreigner, perhaps even a refugee that had recently immigrated to France. That’s where the idea of the pseudo Eastern European accent came from with obvious overtones of a Rasputin type character. He wanted Tartuffe to be something “other” than the upper class, 1%, family that he had infiltrated.

Do you have a favourite moment from that production?
Favourite moment from Tartuffe?? SO many!! I loved playing with all those people. Maev Beaty, Graham Abbey, Anusree Roy…all of them…so much fun! And Gord Miller as my nearly silent henchman!  I loved doing both the scenes I had with Maev. And it was so great to work with Graham as well. We only really had one scene together (apart from a brief scene at the end of the play) but it was a big one, filled with high emotions and a pillow flight- doesn’t get much better than that.

You’ll be returning to Tartuffe next January as part of the new Canadian Stage season. Is there anything you’re particularly excited to revisit or a change you’d like to make the second time around?
I’m most excited about having the opportunity to play the show night after night. Because of the schedule in Stratford, the fact that there are other shows playing at the same theatre throughout the week, we never had the chance to play the show on consecutive nights. Sometimes there would be five days between performances of Tartuffe. I’m really interested to find out what happens to us when we have the opportunity to perform the show night after night. I suspect it will give us an opportunity to play with a little more confidence and a freedom that is hard to find when you haven’t done the play for, sometimes, up to five days. That is one of the challenges of Stratford: keeping a show alive in your mind and body when you only do it two times a week.

Do you try and see every play in the season? What were some of your favourites of 2017?
The only play I didn’t get to last year at Stratford was The Komagata Maru Incident– the night I had off to see it, it was sold out. But, yes, I try to see every show. I loved The Virgin Trial; I love Kate Hennig’s writing and the way she tells a story. I also really enjoyed Timon of Athens. But I think my favourite was The Breathing Hole. I enjoyed the story and hearing the Inuit language.

You’re due back at the Festival this year. Tell us about the roles you’ll be playing.
I will be playing Sicinius Velutus in Coriolanus directed by Robert Lepage and I appear in Napoli Milionaria! later in the summer, directed by Antoni Cimolino.

I’m looking forward to being a part of both productions. Both parts are very interesting but neither of them are leads so I’m not feeling the same kind of pressure as I did, say, last year, or other years when I was playing a lead or leads. And neither of them are comedic roles which is also a nice change for me. The last few years at Stratford I’ve played comedic parts and there is a certain amount of pressure that I feel when playing comedic roles. Comedy is hard. And scary. I realize that’s a high class problem. Antoni Cimolino and the Stratford Festival have been very good to me over the last 11 years.

You’re also nominated this year as part of the Outstanding Ensemble of The Wedding Party. What are the biggest challenges of playing multiple roles opposite yourself?
I’m so pleased that we have been nominated for Outstanding Ensemble. I have loved working with all those people: Jason Cadieux, Virgilia Griffith, Trish Lindström, Moya O’Connell, Kristen Thomson, Jane Spidell (the re-mount). I love working on Kristen Thomson plays. We workshopped Wedding Party over a period of about four years, and we each created our own characters with Kristen at the helm taking us through various improv games and situations (Tony Nappo and Bahia Watson were also involved in those workshops and created some of the characters seen in the show). And then out of the characters and some of the material that we created, Kristen went away and applied her unique voice and magic and came up with this raucous farce. I’ve loved playing in it and being part of that group of players, all of whom are not only amazing actors and performers but also fun to hang out with. And Chris Abraham knows how to build a show. I’m lucky to have been in the shows that he has directed. I’m also very lucky to have had the chance to work with Kristen Thomson on two of her shows. I love her writing and I love acting with her. Someone Else remains one of the most fulfilling theatre experiences I’ve ever had. That was another show that was full of great people: Kristen, Bahia Watson, Damien Atkins. Chris directed it, of course. Julie Fox designed it. Kim Purtell was the lighting designer. I sound like a broken record, but, I am so lucky to have had the chance to work with so many great people. Not just talented artists but also great humans who care about the world, who are passionate and compassionate people, and who are aware of the world around them. Real artists.

But back to the Wedding Party. It’s been a very enjoyable show to be a part of. It is, also, easily the most tiring show I’ve ever been a part of. It takes so much energy on AND off stage. Last time we did it, I lost five pounds over three weeks. It’s a great workout. No gym required.

Is there anything you’d like to add?
Thank you for the nominations over the years. I am my own worst critic so it’s nice to know other people appreciate the work I try to do.