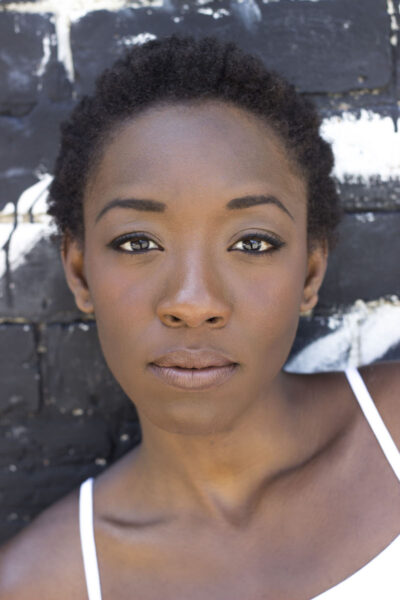 The brilliant Virgilia Griffith’s Outstanding Actress nomination this year is for How We Are, a tiny, site-specific new work by Polly Phokeev co-developed with Mikaela Davies. I technically saw a workshop production, as has everyone who’s seen How We Are thus far, but the play scored two nominations all the same. Workshop or no, the moral and emotional complexity of the show in general and Virgilia’s gripping performance in particular was as deep and nuanced as most things far past the workshop stage.

Can you remember your first experience with theatre?
When I was thirteen years old my aunt Camille took me out to the theatre. We went to see Adventures of a Black Girl In Search of God by Djanet Sears, at the Harbourfront Centre. I was already training in dance and vocal at the time, but this was my first theatre experience. I was hooked after that.

When did you know you wanted to be an actor?
When I opted to attend a high school for the performing arts, I was exploring acting as a career. My last role in high school was Elizabeth Proctor in The Crucible and that was the deciding factor.

What’s your favourite role you’ve ever performed?
It’s hard to choose. I am grateful to have played such different roles. One of my favourites is Gigi from Gas Girls written by Donna Michelle St. Bernard. It was really hard to let her go when the show closed. I still miss her.

How did you get involved with How We Are?
I auditioned for Seams written by Polly Phokeev. I did not get the part but it gave me the opportunity to meet Mikaela Davies for the first time. Mikaela wrote me a lovely email after the audition, and later both she and Polly invited me to be a part of the How We Are project.

The production you’re nominated for was technically a workshop. How much was the play still changing and developing through that process?
The piece was cleverly written and directed. However, we were constantly working and re-working, analyzing, and digging deeper to make a better story. We were aiming to keep it clear, and to keep it fresh.

Tell us about working with Mikaela as a director.
Mikaela Davies is a very passionate and meticulous director. I trusted her completely. She demands all of you and provides the freedom to view the play from different angles. She provided a great learning environment. The experience was transformative.

How did the play develop further between the first and second workshops?
After the workshop, Polly made some changes to the script.   They weren’t huge changes but as an actor on the inside the rhythm and the shifts were faster and sharper. It demanded even more focus and deeper connection to the thoughts.

How did the site-specific staging affect your experience of the play?
It was terrifying. The bedroom setting signaled the intimacy of the subject matter. There was nothing to hide behind. It was challenging to shut out the audience because they were so close. We had to be focused and present with one another. All Sochi and I had was each other.

Tell us about working with Sochi Fried. Did you know each other beforehand? How did you go about developing such an intimate, comfortable relationship?
Thankfully Sochi and I had some background. We both graduated from Ryerson Theatre School, and had kept in touch. I have admired her work since school and was eager to work with her. We had worked on an acting project before and had already developed some chemistry. It was very comfortable working on this project with Sochi. We trusted each other.

Did you have a favourite moment in the show?
One of my favourite moments was after the fighting Cassandra and Jess hug. They share an intense hug in attempt to make peace.

There’s a lot of ambiguity in the play and audience members disagreed about what really happened and how they felt about it. What were some of the most interesting reactions you heard?
There was a lot of discussion about what really happened that night between Cassandra and Jess. One comment that I got was that Cassandra staged the whole thing and manipulated the situation because she hasn’t come to terms with her sexuality.

You also appeared in Outstanding Production nominee Byhalia Mississippi last year. What stands out in your memory about that production?
I love this play too! We had an amazingly talented cast, and a great story. This production really challenged my versatility as a performer. I feel grateful to have been a part of it.

What are you working on next?
There are a few projects that I’m developing. I’m looking forward to another adventure.

Do you have anything you’d like to add?
I am really grateful to have been nominated this year.