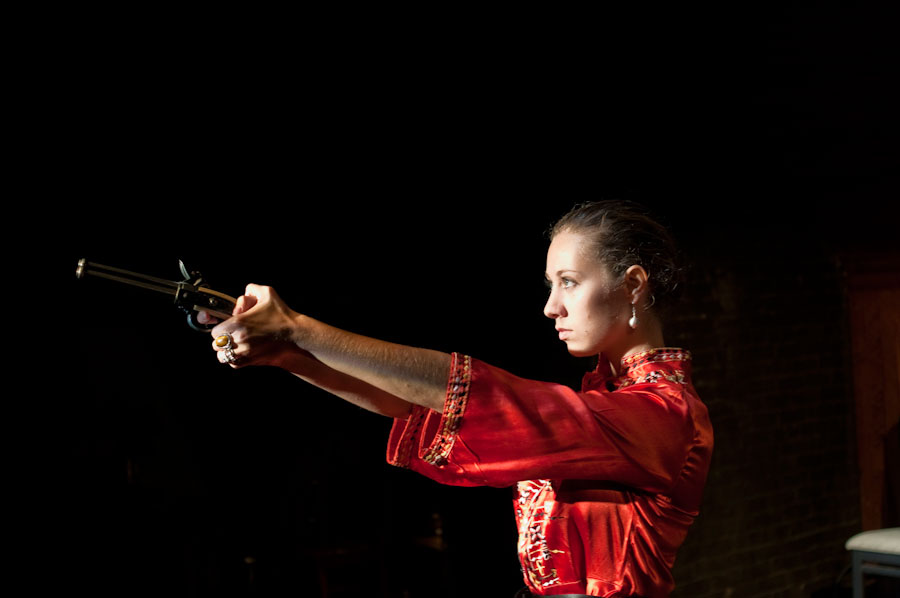 Before we announce the winners of the 2010 My Theatre Awards, we’re proud to present the My Theatre Nominee Interview Series.
.
This fall, Sochi Fried captivated audiences as the title character in Ibsen’s complex tragedy Hedda Gabler with Toronto’s Alumnae Theatre Company. Her layered performance earned her a Best Actress nomination in the local/independent division of the 2010 My Theatre Awards. The production’s director Jane Carnwath also earned a nomination.
.
Read on for Sochi’s thoughts on the role.
.
Can you remember your first experience with theatre?

I was one of those children who are constantly having conversations with themselves in the mirror, playing dress-up, and generally spending most of their time in elaborate imaginary worlds – I still do.
My earliest memory of performing in front of people, however, would have to be singing the Dreidel song (dance moves and everything) for my entire school at age 4.

I read my very first play in grade 6, Our Town. I remember choosing it during “reading time” from the small library in our classroom. From the opening speech I was sucked in, my eyes welling up as I was launched into that wonderful aching sensation of longing — longing to be in this, knowing that I NEEDED to be in this, to be these characters.

The amphitheatre at Epidaurus in Greece.

I began to study acting after high school at a place called the American Musical and Dramatic Academy (AMDA) in NYC and I continued my studies at Ryerson University.

You danced in the production. Do you have formal training?

As a matter of fact, I do. Though it has been a few years since I’ve taken a dance class. I always took ballet as a kid and then when I was 13 I got into the dance program at Ottawa’s high school for the arts. I continued dancing while at AMDA, tossing tap and jazz into the mix. I’m actually in Buenos Aires at the moment learning how to tango.

I certainly do have a number of dream roles and they run the gamete: Sonya in Uncle Vanya; Martha in Who’s Afraid of Virginia Woolf; Josie in A Moon for the Misbegotten; Malvolio in Twelfth Night; Emcee in Cabaret, to name a few. Hedda was a dream role of mine as well.

Career is a funny word. I feel as though I have barely started. I would like to say that every actor and director I’ve worked with has had a major influence on me, but that’s a rather banal answer, so I will mention two:

I did a fringe play last summer called Dead Cat Bounce with Geza Kovacs. He stepped in at the last minute to cover an actor who had had to pull out due to a severe illness. The epitome of professionalism, he taught me that this, acting, is a job. Plain and simple. And what, as actors, are our responsibilities to our fellow creators and to the audience. It sounds obvious now, but I will never forget the revelation of witnessing the truly skillful way he approached each performance, knowing exactly what was owed the audience.

I have never worked with her, but I did have the chance to watch Rosemary Dunsmore in MacKenzieRo’s production of The New Electric Ballroom while I was still in rehearsals for HG. Her performance was exquisite, a master class in listening – she will never know just how much she helped me as I struggled with those long sections when Hedda plays observer, never opening her mouth.

Favourite role so far is Hedda. Without question.

The company had such a wide range of age and experience in the theatre. Did that cause any tension?

Tension? Not exactly… The process was not without its frustrations, but I find that every project worth working on has stretches, long and short, when you feel like you’re banging your head against a brick wall, no matter the background of those involved. I did come away, though, with a very valuable lesson: regardless of how unsure you may feel about your own contribution to the piece, there is nothing less productive and more harmful to the creative process than letting yourself get wrapped up in personal insecurities.

Tell me about Hedda. How did you approach the role? Did you do anything specific to prepare? Are there any key components that a great Hedda should have?

Hedda is an incredible woman. I fell passionately in love with her. This was really just a first stab and I long to play her again and again and again.

It is a huge role. At times it was overwhelming, but I kept reminding myself that you can only play one thing at a time and to trust Ibsen/Judith Thompson to keep me afloat as I jumped into the very murky waters of Hedda herself.

The director and I both were intrigued from the very beginning with the image of a panther trapped in a cage. So, I played with that a lot. As well as how Hedda’s relationship with her deceased father influences her behavior as the play unfolds.

In terms of research, I looked at other translations of the play, watched every version I could get my hands on, and read what other actresses who have played the role had to say.

I think it is essential the actress playing Hedda genuinely likes and has compassion for this tortured woman, while also having the courage to be thoroughly unlikable as her.

It’s hard to isolate moments with this piece, but every single night I looked forward to the sequence that starts with the dissolution of Thea and Lovborg, followed by the sending of Lovborg off to kill himself, culminating in the burning of the manuscript. What a ride! Astounding how Ibsen takes the actors and holds them in his oh-so-capable hands.

I’m afraid I don’t have an answer to this question… Contact me in a few years.

Well, at the moment I’m living in Buenos Aires for a couple of months, escaping vile winter. When I get back, I will be jumping back into workshopping a new piece I’m creating with two other Ryerson grads about women and madness. As well as auditioning like crazy in order to line up work for the rest of the year.

Yes. I am beyond honoured to have been nominated. Thank you for being such a positive presence and advocate of Toronto theatre artists.