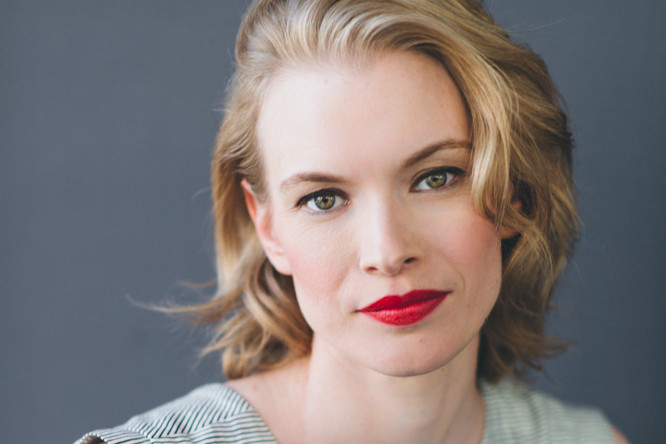 Before we announce the winners of the 2015 MyTV and MyTheatre Awards, we’re proud to present our annual Nominee Interview Series.

The only 2015 performer nominated by two different branches, Christine Horne is up for both a MyTV and MyTheatre award this year for her season-stealing Guest Actress turn on the woefully cancelled Canadian medical drama Remedy and her Outstanding Actress performance as Nina in Crow’s Theatre/Canadian Stage’s all-star production of The Seagull.

Can you remember your first experience with theatre? When did you know you wanted to be an actress?
I think it was something I always wanted to do, but it never felt like a true possibility. I didn’t do or see a ton of theatre growing up in Aurora. I did plays in elementary school and saw community theatre and a few Mirvish shows. I really didn’t have much exposure or experience until I started the theatre program at York University. I think my desire to be an actor came more from watching movies and television than it did from watching theatre.

What have been some of the key moments in your development as a performer?
The Acting program at York was very important for me. Co-creating Gorey Story in 2006 was very important. I got a crash course in filmmaking on my first film, The Stone Angel, also in 2006. And then just working with directors who really challenged me. Melee Hutton, Graham McLaren, Vikki Anderson, Jason Byrne, Chris Abraham, Eda Holmes. I learned so much from them.

Your MyTheatre Award nomination this year is for The Seagull with Crow’s Theatre. What stands out in your mind when you think about that production?
I was so in love with that production, so a lot stands out. The cast was extraordinary – I felt like I was really at the grownups table for the first time. The transitions Chris [Abraham] created between Acts 1 and 2, and then Acts 3 and 4 stand out. Performing Konstantin’s play accompanied by an ASL interpreter one night stands out. Working with Phil Riccio and Tom Rooney – both such brilliant, beautiful actors – stands out.

Nina is a very quiet role with a lot going on. How did you approach that tricky balance of getting across all of her complexity in an understated way?
I’m not terribly good at articulating “my process”, for lack of a better term, but I think a lot of it had to do with listening intensely, and intensely idolizing many of the other characters. Giving Nina huge dreams and ambitions, having a clear sense of where she was coming from and where she wanted to go. And really giving over to the incredible ride of falling in love every night, and being totally destroyed every night. I thought of her as being quite transparent, quite a raw nerve. No mask, no ability to lie.

What did you bring to the famous character that was unique to your interpretation?
I don’t know really. The comment I got over and over from people familiar with The Seagull, and it always meant the world to me, was that our production helped them understand the play and this character in a new way. Or they understood it at all for the first time. But I think that has more to do with Chris Abraham than it does with me.

What were some of the most important things you discussed with director Chris Abraham in crafting your interpretation of Nina?
So many things. I don’t even know where to start. But I think two of the biggest ones, for me, were that Konstantin’s play should be good instead of bad, and that by the end of the play Nina is not the tragic figure, Konstantin is. Both of which I found hugely challenging and I would have been completely lost without Chris’ guidance.

The Seagull is nominated for Outstanding Ensemble. Tell us a bit more about working with that all-star cast.
It was a dream. I felt star-struck and completely out of my depth the entire time. All of these amazing actors I’d been watching and admiring for so long. I still can’t quite believe I got to be a part of that.

Did you have a favourite moment in that production?
The scene between Nina and Trigorin after Konstantin has shot the seagull. Specifically, getting to watch Tom Rooney do Trigorin’s monologue about the agony of being a writer eight times a week. I loved it.

You’re also nominated this year for a MyTV Award for your guest starring role on Remedy. How did that part come about?
Like pretty much every TV job I’ve ever had. I auditioned.

You played a dying woman. Where does a healthy person start when trying to portray that kind of suffering realistically?
Well, the character doesn’t die of natural causes so, physically, that actually helped quite a bit. Learning about her symptoms and her suicide was fairly straightforward (as far as those kinds of acting tasks can go). I was able to do my own research as well as talk with the writer, Greg Nelson. And I tried to focus on her emotional state almost more than her physical state. Her loneliness and depression and at the end, once she gets her diagnosis, both her fear and her resolve.

Do you have any dream roles left on your list?
Too many to mention. But I’ll stick with Chekhov: Masha in Three Sisters, Yelena in Uncle Vanya, and, someday, Arkadina in The Seagull.

What are you up to now/next?
I’m doing Nicolas Billon’s Iceland at The Theatre Centre in the spring. It’s a remount of a show we did at Summerworks in 2012 that has toured around quite a bit. This will be my fourth or fifth time doing it, and I love it. The artists involved – Nicolas, Ravi Jain, Claire Calnan, and Kawa Ada – are some of my very favourite people to work with.

Do you have anything you’d like to add?
Just… Thank you for supporting and promoting Toronto’s artists!!