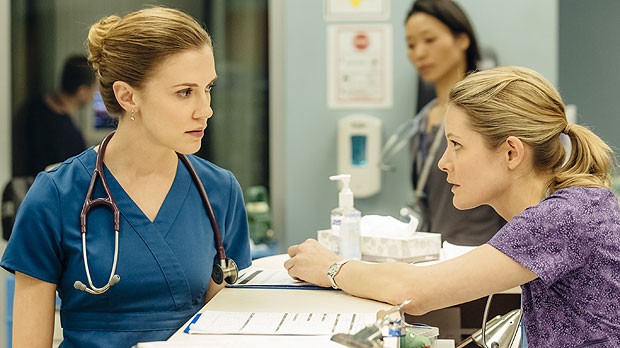 Global’s new medical drama is a fantastically solid primetime offering. Like Rookie Blue before it, Remedy is the sort of well-produced, highly watchable, long-term-potential fare that can do a lot to support Canada’s ever-improving but still flimsy television landscape. Both filmed and unabashedly set in Toronto, Remedy is a Canadian production that uses Canadian actors (including a whole host of great guest stars borrowed from the theatre, from National Ballet dancer Sonia Rodriguez to Stratford leading man Graham Abbey) and its enticing 10-episode first season strongly anchored a TV lineup largely defined by American imports without getting overshadowed (though in recent years Global has lost out on a lot of the best American shows to competitor CityTV). A Canadian television market supported by well-made, accessible and addictive semi-procedurals like Remedy is also a market that can support challenging, niche work like Orphan Black– a market with the potential to stand on its own without counting on The Big Bang Theory (bad example since I can’t think of a single truly great Canadian sitcom*). Canadian TV viewers can’t pretend to like The CBC anymore. We don’t need perfection, but we do need shows that can compete. Remedy can do that.

Theoretically it would seem that the success of any mainstream primetime drama would be what twist the creator puts on their chosen doctor/lawyer/cop concept. In this case, it’s the pointed class system within a modern city hospital (illustrated conveniently by a single family). It’s a fresh take that opens doors most medical shows don’t bother to open (Bruno the overqualified porter comes to mind, as do the dangers facing the underpaid workers in thankless jobs best illustrated by Zoe’s needle stick) but it’s also a concept that doesn’t mar the action with too much baggage (think A Gifted Man). But while the “spin” is what sells the show to the network and gets it on the air, it ultimately has very little to do with why people watch and how much they enjoy the show. Think about Grey’s Anatomy– that show was sold on the intrigue of Meredith living up to her mother’s standard and the drama of her having just slept with her new boss. But it was beloved (still is, to a lesser extent) because the casting was spot-on, the tone was unique, the characters were intriguing, the dialogue was sharp.

To an admittedly lesser degree, Remedy is in the same boat. It’s cool, I guess, that it explores the underbelly of the hospital but that does not a TV addiction form. I don’t particularly care that Griffin gets less respect than his sisters because he’s just a porter; who would tune in just for that? No, I’m hooked because Sara Canning’s Melissa Conner is a character I want to spend an hour on Monday nights with. I’m hooked because I really really care that she lets down her guard enough for Brendan Gall’s adorable Dr. Gordon to sneak in (he’s enchanting, Mel, just let him love you!). I’m hooked because she overheard her excellently frustrating father (Canadian TV MVP Enrico Colantoni, of course) saying that she’s not a natural surgeon and it was all sorts of heartbreaking and true at the same time. I’m hooked because she didn’t show up to cheer in the game of floor hockey, she showed up to play. (Note: despite what you may assume from the preceding paragraph, Mel’s not actually the main character, she’s just the most interesting one as of yet).

Zoe (Genelle Williams) still needs some fleshing out (by far her best episode was thoroughly stolen by Natalie Krill’s heartbreaking performance as a TB patient) and Dillon Casey is fairly uninspiring in the archetype of the squandering genius (he’s no Lip Gallagher, but then again, no one but Jeremy Allen White has that kind of magic) but I figure the longevity potential in this show gives them and so-so nurse Sandy plenty of time to come up to the level of super surgeon Mel and Colantoni’s conflicted patriarch Allen Conner.

Moving into season two I would also recommend an expanded role for Gall (literally cannot get enough Jerry Gordon), a return for Martha Burns’ amusingly brazen matriarch character, and a lot more Bruno (Diego Fuentes’ golden hearted porter was the reason I tuned in for a second episode). In exchange, I’m more than willing to let go of Brian, a character whose hard edges aren’t as intriguing as Mel’s and whose plight I only cared about rarely in season one. But Matt Ward is awfully pretty so maybe just write Brian a better storyline next year than being engaged to Clearly the wrong woman, then he can stay on the show (but, to reiterate, Brendan Gall’s charm/face/brain combo > Matt Ward’s abs, if you’re making me choose). The ending of season one also points to a heavily expanded role for questionably villainous Dr. Tuttle in season two but a final-moments twist might also be pointing at her being more than just questionably villainous going forward.

Remedy is not necessary TV. I’d still direct my attention over to Orphan Black if you’re looking to pick up just one Canadian show. But Remedy is exactly the sort of show I think we needed in Canada- something simple, something standard, but something good that can compete with the big, accessible hits of our powerful neighbours to the south.

*The best argument I can think of would be for Little Mosque on the Prairie. That show was culturally important, fantastically charming and the episodes written by Rob Sheridan tended to be actually funny. But it was So Canadian. So mild, so apologetic, so awkwardly hokey that it seemed almost like a throwback sitcom. Canadian sitcoms are never zeitgeisty or hip, they’re just folksy. I don’t need a Canadian Girls– that actually sounds horrible- but there’s no reason we couldn’t have a New Girl.