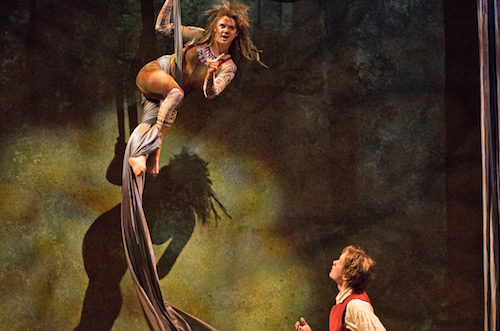 In a really pretty strong Stratford season, these mostly good productions fell to the middle of the pack because other things were better, not because they were bad at all. These were Stratford’s mixed bag productions of the year- some polarizing (Bakkhai), some just generally medium (Romeo & Juliet) and the best recommendation I can give you is simply to see them if they sound like your sort of thing and skip them if not because they are neither unmissable nor unwatchable.

Treasure Island
An emotionally anchoring frame and a few key moments of wowza theatricality set this otherwise pretty traditional kids show apart. There isn’t much to the dated story but it’s well told by a smartly deployed cast that makes scene-stealers out of ensemble parts (Jamie Mac as an unintelligible pirate), season-best star turns out of carefully reimagined supporting characters (Katelyn McCulloch who plays the role of Ben Gunn with fun bravura and incredible circus tricks) and worthy heroes out of dull leads (remarkably young-looking adult actor Thomas Mitchell Barnet is clutch as Jim Hawkins, allowing the production to sidestep the no-win minefield that is either casting a kid actor or forcing the audience to suspend way too much disbelief). The production drags in the middle as so many kids shows do and the moments of big emotional impact are too few and far between but Treasure Island is bright and fun and full of things the kids aren’t likely to forget anytime soon.

The Changeling
The little old ladies behind me at this show found it all very shocking but I didn’t find it nearly shocking enough. Two-note Ben Carlson is very dull casting for the key role of De Flores (his dramatic lead note has rarely worked for me; he plays his 100% succesful wry truth-teller note to far greater effect in Timon this year) and though Mikaela Davies as a savvy Beatrice-Joanna battles valiantly against the text’s inherent misogyny, she gets little backup from Jackie Maxwell’s direction that doesn’t hit hard enough on the horrors of Middleton & Rowley’s brutal story. The production is stylish (Camellia Koo & Judith Bowden’s design gives the world a slinkiness that works beautifully) but it’s too clean- the play, for me, only clicks into place as a story worth telling in 2017 if it’s packed with messy moral ambiguity and soaked in blood. The little old ladies may have muttered a few “oh my”s but they’ve surely forgotten about it by now; The Changeling shouldn’t be something you’re able to forget.

Romeo & Juliet
I choose not to grade Scott Wentworth‘s decent but unremarkable production on a curve. Yes, it’s far and away better than the festival’s last attempt at this text, but that 2013 production was so terrible that this one is able to beat it by miles (and collect accolades for doing so) while still being merely so-so. I’m adamantly against casting an actor in the same role twice and that belief gets backed up here as Evan Buliung‘s second stab at Mercutio on the festival stage delivers nothing anyone hasn’t seen before. Seana McKenna is a fine nurse who, of course, shines in the role’s underrated dramatic scenes (3.5 and 4.5 especially) and Antoine Yared is a charmingly simple Romeo, though neither offers up any particular moments I’d pay to see again. There’s a deliberate simplicity to the direction, which pays off in a “those who don’t try never look foolish” kind of way, but the one strong move Wentworth makes is to pointedly lean into the “just two kids” element of the story, annoyingly sending Sara Farb into the kid mode she’s honed over years of being miscast as, well, a kid (Anne Frank, Lucy in The Lion, The Witch & the Wardrobe). So, instead of the grounded, rash but clever Juliet an actress of Farb’s calibre absolutely has in her, we get a prancy, uptalking little girl. Such infantilization understandably sanitizes the sex, but I was sad to see what might have been great chemistry buried, not to mention the fact that Romeo & Juliet without the sex makes next to no sense (the distant, almost platonic, staging of the nightingale and the lark scene makes it possible to leave this production thinking R&J’s marriage is never consummated at all, which throws so much of the play’s thematic resonance out the window). I don’t mean to make the production sound terrible. It’s really not terrible, not even a little bit. It wastes a whole bunch of potential, but a script this rich and a cast this good has potential to waste without delivering a bad product. This is a perfectly fine Romeo & Juliet, if you’re not too attached to Romeo & Juliet. I’m way too attached to Romeo & Juliet and all I could think about was what this production could have been.

The Madwoman of Chaillot
The delightful second half of act one of this Jean Giraudoux morality play (translated by David Edney) is what elevates it from skippable and slow to somewhat delightful. The play begins with a trio of bad guys being bad- generic businessmen, prospectors, The Man abusing and disregarding the colourful everyday people who populate a colourful Paris cafe (very colourful, designer Teresa Przybylski went all in on wackiness). As I’ve never particularly enjoyed watching cartoon villains revel in their villainy, I found myself tiring quickly of what felt like a lecture devoid of any real character development. The entrance of Seana McKenna as the titular local eccentric provides a charming reprieve from what will soon go back to being a too-easy indictment of capitalist society, triumphant though the silly ending may be. At this point we get a genuinely funny sequence that presents a thesis statement far more insightful and far less overdone than David-good/Goliath-bad: those who embrace madness can most clearly see the truth. Into this oppressively self-conscious crowd comes a woman who doesn’t care that her scarf and her hat don’t match, she thinks they’re pretty. In her Amelia Bedelia-esque nonsense lies a wisdom that cuts through all the societally imposed noise straight to the heart of every matter. McKenna leans into the goofy role as if it’s a fun vacation from the wariness of being a Serious Dramatic Artist and her energy enlivens everything around her. The story is tired but the heroine a delight.

The Breathing Hole
This Canada 150 commission gets off to a slow start with the full weight of the production resting on actors with little to no live stage experience, leading to dropped lines, missed cues, and awkward pacing. That’s the only reason it’s included in the “so-so” section, because it just isn’t up to the performance standard of the “see” shows. Reneltta Arluk’s production is actually really beautiful- smart, methodical, quietly emotional- and Daniela Masellis’ arctic design is incredibly effective, especially the giant puppeted polar bears that give the production its gigantic beating heart, to say nothing of its startling ending. Colleen Murphy’s inventive text takes the story so much further than you imagine it going in act one, extrapolating further and further as the cautionary tale barrels towards heartbreak. It’s also shockingly funny, highlighted by a language barrier “who’s on first” that perfectly illustrates the “we’re not all that different” subtext that would otherwise have landed with too much of a thud. The Breathing Hole has some of the highest emotional stakes of any production this year, coupled with some of the most affecting visuals. It’s imperfect but it’s quite a sight.

Bakkhai
This bold production from director Jillian Keiley really belongs anywhere but on the so-so list. You will likely either love it or hate it, there doesn’t seem to be any in between. For myself, I loved parts (Mac Fyfe’s brazenly sexual, androgynous, inhuman performance as Dionysos) and hated others (Veda Hille’s original musical theatre-sounding songs are so out of place in this artsy greek myth that, pretty though they may be, it’s honestly hard not to laugh each time a new one begins. It’s rough to blame musical theatre composer Hille for composing in her own style, though; surely a hiring issue more than an execution one). Averaging such reactions out, Bakkhai ends up on the so-so list even though there’s nothing so-so about it. At the end of the day, I’ll always give credit where credit is due for a big swing taken in a climate that doesn’t always encourage such things. Bakkhai is a huge freaking swing and for that I kind of love it.