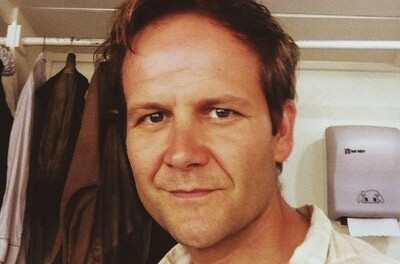 One of the definitive leading men in Canadian theatre at the moment, the prolific Evan Buliung has been a part of many of our favourite productions since MyTheatre first began.

Under the guise of discussing his 2015 MyTheatre Award-nominated turn for Outstanding Actor in Stratford’s music-infused Pericles, we sent Evan down memory lane to talk about some of his best performances leading up to that obscure Shakespearean adventure.

Where did you train?
I trained at George Brown College back when it was at 530 King, which I believe is now a condo or a condo presentation centre. Either way, it looks much nicer than it did and has fewer mice and mice-like theatre students roaming it’s halls.  It was a beautiful place in it’s rustiness for those who remember it.

This is actually your second MyTheatre Award nomination; you won back in 2011 for The Grapes of Wrath. What do you remember most about your turn as Tom Joad?
I remember finishing the novel on a high speed train from Zurich to Florence openly weeping but not fearing that fact cause the europeans encourage that kind of sentimentality. I would have to wind myself into a state of frustration before that show, listening to Dvorak’s symphony number 9 cause it sounded so incredibly americana. The play had a profound effect on all of us who did it, that kind of struggle and suffering takes its toll. Janet Wright and Tom McCamus, acting with them too was a lesson in how it’s done without a doubt.

You’re a Stratford mainstay but you’ve also worked a lot in recent years at Soulpepper, including the role of Jamie in one of my favourite productions ever- Long Day’s Journey Into Night. Tell us a bit about your experiences there.
O’Neill is a strange beast of raw and real human experience dealing with family, addiction, unspoken love and tragedy…a dangerous tightrope for any actor. Jamie Jr. wears a beastly mask covering some serious pain and jealousy for his brother that comes pouring out at the end of the play.  The beauty of the writing lets the actor discover, beneath the layers of bile, a sad honesty that both his and his family’s pain is uncontrollable.  It was frustrating, cause they all just needed help and were afraid to ask. I adored working with Joe [Ziegler] and Nancy [Palk] and Gregory [Prest] and Krystin [Pellerin], they are all top drawer.

In 2014 you played three roles in two plays at Stratford. How did you feel about switching off performances as Oberon and Titania with Jonathan Goad? Did you have a preference between the two characters?
I LOVED playing those parts with Johnny!  I stole everything I could from him, who wouldn’t? I even injured my arm trying to do his brilliant prat fall into the pond. I thought I’d broken my arm but I just hit the funny bone in a less than funny way.  I loved playing Titania, to see how the other half lives. I still wish that she walked away from Oberon at the end of the play. Oberon is a bit of a dick [laughs] but lots of fun to play for sure.

You also played Edgar in Antoni Cimolino’s production of King Lear. I find Edgar (and his alter-ego Poor Tom) one of the most confusing characters in Shakespeare’s canon. How did you go about making heads or tales of his enigmatic motivations?
I have played Edgar twice now and I think I can lay him to rest.  Antoni and I had the idea to play him as a drunken, spoiled and sad individual.  He’s lost in privilege and his voyage into the wilderness is the journey of a lot of us. Stripped naked, lonely and afraid, slightly mad, or pretending to be madder than we are to keep those we fear at bay.  He has the most important line in the play in my opinion to his blinded father “thy life is a miracle…”  he discovers that gratitude and helping others brings unity and peace and purpose. I think he’s one of the greatest spiritual characters in the cannon but it’s challenging language for sure.

Your MyTheatre Award nomination this year is for the title role in Pericles. How does performing one of Shakespeare’s more obscure works compare to something the audience is more familiar with?
Well, everyone likes a story they haven’t heard before I guess. I think people were surprised by where the journey of Pericles goes in the end. During Shakepeare’s time, it was his most popular play.  It’s certainly a moving story.  I’ve played iconic characters before like Stanley Kowalski and Aragorn, but people have certain ideas in their heads about those roles…hell, I have certain ideas about them too. So they’re harder to play and shake those old robes.  I had a woman tell me I was no Marlon Brando after a performance of Streetcar one night and I replied “ obviously!!” I think I scared her.

This production of Pericles had a lot of musical elements and you, as well as most of the cast, split your time last season between it and a full musical Carousel. How does your work in one genre inform the other?
hmmmm… that’s a tough one.  I don’t think it does. I could make up some smart response to that but generally I feel that each style of stage work has its own challenges and similarities.  If you can sing and perhaps dance too, then you truly have a leg up. Cause, really, musicals are hell of a lotta fun, can be very moving and are certainly very popular.

What were some of the most important things you discussed with director Scott Wentworth in crafting your interpretation of Pericles?
When we were nearing tech, I hadn’t really found who Pericles was and I called Scott in a mild panic one night to reassure him (though I was mostly trying to reassure myself) that Pericles would rise up in the middle of the world Scott had built with it’s Dickensian flavour.  I wanted very much for him to NOT be a hero. No hero acting whatsoever, in fact quite the opposite.  Pericles flies in fear from one place to the next and I think he represents our own flights of fear from ourselves. Each island and each inhabitant an allegory for some aspect of our human lives that we recoil from.  He speaks of fear throughout the piece in fact and because of his constant running, he is constantly losing the things he loves.  Until the end when he faces the truths about himself and all is restored.  It’s really such a beautiful piece about human folly and the forgiveness of love.

Do you try and see every play in the season? What were some of your favourites of 2015?
I try very much to see them all. Certainly Johnny [Goad] as Hamlet was dynamic. I saw Sound of Music three times so I guess that was my favourite last year.  It had nothing to do with my girlfriend being in it, though [laughs]; it was a tremendous production of that piece. The Last Wife was brilliant too, a great cast and wonderful play by Kate Hennig. Deb [Hay] and Ben [Carlson] in Shrew were a lot of fun too. It’s a wonderful company and I’m blessed to work there with those people. Tom Rooney does alright too I guess [laughs].

Do you have any dream roles left on your list?
Nah.  I enjoy what is there to feast on. My dream role list only leaves me cold to be honest.  It’s usually the unexpected parts that prove the most rewarding.

Who are some of your favourite people to work with?
That’s putting me on the spot! [laughs] Neil Monro was my favourite director and sadly he’s no longer with us.  Chris Abraham, Antoni Cimilino, Scott Wentworth, Alisa Palmer, Tracey Flye, Chris Newton, directors like that.  I love working with people who are funny. Mike Nadajewski is funny. We had a blast playing Black Stache and Smee in Peter and the Starcatcher out west. Tom McCamus, Jim Mezon, Stephen Russell, Deb Hay, Laura Condlln, too many to name!! People who join this profession can be infinitely fascinating and infuriating at the same time and that’s what makes it so special I guess.

What are you up to now/next?
Now I am getting ready to start Chimerica at MTC which then moves to the Bluma Appel theatre in Toronto in the spring.

Do you have anything you’d like to add?
I guess just that I’m really grateful for the opportunity to do what I do and work with the great people I get to work with. It’s rare and I don’t take it for granted.  Each play allows for more digging into the human soul and psyche and inevitably allows us to understand each other a little better and get closer to being able to laugh at ourselves just a little more.  I’m very lucky.