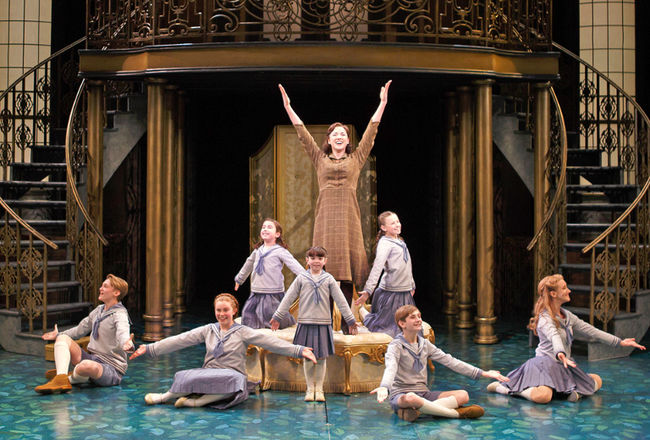 In Stratford: The Sound of Music

When I was six years old, I fell madly in love with The Sound of Music. And I mean madly, as in I went absolutely mad. My poor parents and older brother were subjected to an endless stream of six-year-old Julie Andrews imitation on an 8-hour drive to Montreal. 8 hours, nothing but “do-mi-mi-mi-so-so-re-fa-fa-la-ti-ti!” (see, that’s how you know I’m a real fan; an impostor would have just written “do-re-mi”). After this initial fervor died down a bit, I took a break from the Sound of Music until the unfortunate day at age 16 when I saw the movie with fresh going-on-seventeen eyes: what does she mean “you belong to him?!” I cried, my eyes tragically opened to the array of dated gender norms and cheesy simplistic solutions present in my once-beloved musical. Mother Abbess’ voice, once thought to be transcendent, sounded warbly and underwhelming. It occurred to me how idiotic it is that our heroes are invited to sing at a national competition and their chosen showpiece is all about jam.

It’s this tumultuous history that I brought with me to the Stratford Festival’s current production directed by Donna Feore, far-removed fondness scarred over with cynicism.

But then, The Sound of Music. I don’t know if it was Feore’s consistently magical touch or the transfixing clarity of Stephanie Rothenberg’s voice, whether I was primed for something uplifting amidst a sea of dull Shakespeare or if just the right amount of time had passed since I’d last heard Richard Rodgers’ charming score but Stratford’s Sound of Music captured my heart with such force that the sound of those songs I once belted the entire way to Montreal actually brought tears to my eyes. It’s not perfect (no contemporary production of such a dated text could be) but it’s wonderful.

The be-all-and-end-all of any Sound of Music, but especially this one, is Maria and Rothenberg is everything that role has ever called for- warm and strong and a little bit quirky, sending that score to the back of the theatre as though she just couldn’t hold it in anymore. She has less than zero chemistry with Ben Carlson (who battles valiantly as Captain von Trapp though the ghost of a far-more-suave, far-more-enigmatic Christopher Plummer looms too large both in that text and on that particular stage) but a lack of heat between the leads is replaced by well-earned affection on both sides and Rothenberg’s connection with the wonderful chorus of children is more than enough. Kids are the wildcard in a tightly executed Sound of Music but Feore has wrangled this group into perfect step from Alexandra Herzog’s defiant Liesl down to the standout of the group, Zoë Brown as little Gretl. A lot has been made of the treatment of women in this Stratford season but there’s a moment in The Sound of Music when a sheltered, silly sixteen-year-old girl stares down the barrel of a gun and doesn’t so much as flinch so perhaps we’ve just been looking for our heroines in the wrong places.

The scene transitions are insanely clunky, act two drags, and Anita Krause didn’t quite manage to rekindle the magic I long ago lost sight of in “Climb Every Mountain” but there was a stretch in act one of Stratford’s Sound of Music when I remembered why that musical was once one of my favourite things. It might be again.