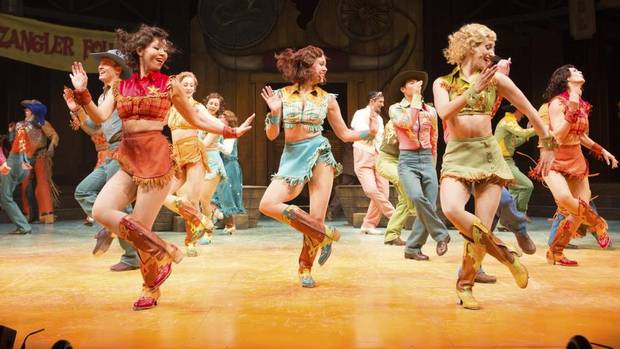 In Stratford: Crazy for Feore

Like 42nd Street before it, Crazy for You is made of nothing but charm and tap dancing. But one can get pretty far on charm alone and, if you’re as good of a dancer as any member of this ensemble, tap dancing can get you even further.

Written in 1992 and forged Mamma Mia/We Will Rock You-style out of the songs of George and Ira Gershwin, Crazy for You is your basic behind-the-scenes-of-a-show musical with a handsome leading man (in this case Very handsome) who falls for a lovely girl (in this case Very lovely) amidst some hijinks, a few misunderstandings, a couple of amusing supporting players and a story about the amazing, redemptive Power Of The Theatre. But with cowboys, for some reason. It’s all very trivial but it also has the festival’s musical secret weapon (and the real star of the Feore family) director/choreographer Donna Feore.

Feore’s not alone in her quest to make something out of some pretty songs and not a lot more; she’s working with a particularly great cast here- that amazing chorus, the dashing Josh Franklin and his Gene Kelly flare, the sweet-voiced Natalie Daradich and her Judy Garland charm, Tom Rooney and that comic timing! No one has a voice as strong as the festival’s usual musical stars (Paul Nolan, Kyle Blair, Chilina Kennedy) and the ensemble dances circles around the leads, but the director focuses on what Franklin and Daradich have in spades- presence, chemistry and endless likability- to make this production stand out. Feore has such an impeccable sense of pace and movement that she consistently makes magic when given the Festival’s thrust stage to work on and that’s definitely the case here. Her thrilling choreography is the real star of the show, elevating an innocuous musical into one of the most enjoyable productions of the year. Her husband may be the one on the posters but, year after year (see also last year’s best production, Fiddler on the Roof), Donna Feore is one of Stratford’s biggest stars.