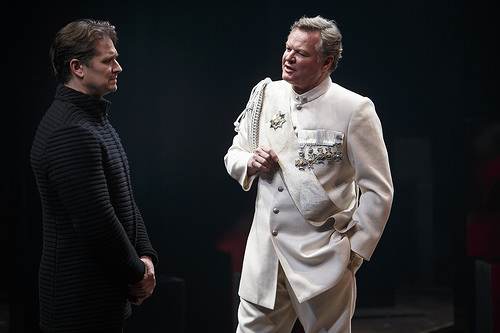 There’s a reason my precocious 14-year-old cousin Reagan rolls her eyes when I try to tell her about her badass Shakespearean namesake. Shakespeare’s boring, people. It’s dated (in the case of Taming of the Shrew, offensively so) and irrelevant and sort of hard to follow. Why would I go see Hamlet when I can see The Sound of Music instead (also dated, but that’s an argument for another day)? There’s dancing and memorable songs and cute child actors in The Sound of Music. That’s the argument, right? That’s why most kids quit the bard for good after grade 12 and never for a second regret their decision. Every couple of years, The Stratford Festival- theoretically the most important classical theatre company in North America- comes out with the sort of production that proves all that nonsense wrong. But then productions like the current Hamlet and Taming of the Shrew take over that big, beautiful festival stage and an entire generation of kids for whom this was their one big Stratford field trip turn away from Shakespeare, if not for good then at least until a new hero shows up with an accessible manner and a copy of 10 Things I Hate About You. As a premiere destination for schools, the festival has a responsibility to make at least their mainstage productions somewhat entertaining and rewarding for a modern thinker. You know what? Scratch that, the festival has a responsibility to make all their productions at least somewhat entertaining and rewarding for a modern thinker even if they don’t hold a teenager’s fragile relationship with Shakespeare in their hands. If that’s not what this ridiculously well-funded and well-respected company is striving to do with every single show in every single season, what’s the point?

My optimistic side wants to believe, as pessimistic as it sounds, that Hamlet and Taming are nothing more sinister than failures. Directors Antoni Cimolino and, especially, Chris Abraham are not known as the kind of directors who would strive for anything less than work that’s both engaging and meaningful. Cimolino has a frustrating tendency to play it safe but both men have facilitated some truly great theatre in their years at the festival and I just have a hard time believing this was the season they suddenly decided to phone it in. Both shows have strong casts and, while neither is my favourite text, both plays are brimming with potential and begging to be interpreted in new ways. So why are both Hamlet and Taming so uninspiring? I’m determined to believe that something just went wrong- a bold design concept wasn’t taken far enough (Cimolino’s attempt at insightful anachronism) or performers couldn’t deliver (if there is a feminism-friendly subtextual act five conspiracy between Abraham’s Petruchio and Kate, it certainly doesn’t read) because, with texts as flawed as Taming and as overdone as Hamlet, just doing the play (to borrow a phrase from Abraham’s fabulous take on the Taming induction, easily the highlight of the production) isn’t enough. Or at least it isn’t in this case.

All the leading players are fine technical performers and a few really deliver- Hay mines great frustration as Kate in the late acts of Taming; Adrienne Gould’s Ophelia is glorious (though I really think we need a moratorium on casting any actor twice in the same role); Tom Rooney is show-stealing in both productions (though that’s nothing new). But there isn’t a single character interpretation on the stage that feels fresh or leads to any new textual revelations, with the exception of Sarah Afful’s Bianca. Casting someone with as much maturity and presence as Afful in the usually condescended-to ingénue role really changes the game for that character and for her “shrew”ish sister. In this version, Bianca gives as good as she gets from Kate but merely fakes innocence better when someone else enters the room. That’s a lot more interesting than any Bianca interpretation I’ve seen before and it has intriguing consequences for Kate’s worldview (it makes her a lone honest figure, unfairly maligned for her refusal to fake niceties; shades of Cordelia almost).

Wouldn’t it have been nice if such thought and interpretive consideration was given to other characters? What does Jonathan Goad have to say about Hamlet that hasn’t been said before? Who is Ben Carlson’s Petruchio beyond the natural consequences of casting Ben Carlson (well-timed wit and strong chemistry with Kate, played by his wife)? Is it really possible that two of Canada’s greatest actors (Seana McKenna and Geraint Wyn Davies) are letting the psychological minefields that are Gertrude and Claudius be overshadowed by a particularly amusing Polonius?

These actors- highly trained, well respected, hugely talented- should sadly be prepared for snores at best and flying erasers at worst come September matinees because these productions are going to lose the students by the end of act one. They almost lost me, for crying out loud (and my Shakespeare attention span is not short). Why? Because the two most interesting Shakespeare characters currently on the most prestigious Shakespeare stage on the continent are Bianca and Christopher Sly. No offence to Bianca and Christopher Sly but that’s really not okay.