The most fun I’ve had at a Shakespeare play in a very long time was at Des McAnuff’s raucous celebration of anachronism: Twelfth Night, my favourite Stratford Production of 2011.

I love anachronism as a concept. The universality of Shakespeare’s plays makes it okay for them to exist in a vacuum of “anytime, anywhere”. Oftentimes, opening up the entire world’s history of dress allows a character to express who they are in that very moment, regardless of arbitrary fashion. That same virtue applies to anachronism in music selection- whatever fits. The effect is a production that gets at the heart of who these people are and what they’re feeling. In a flirty scene, Olivia might appear dressed for a 1920s tennis game, while a later coy Olivia takes a more classical approach to her wardrobe. Debra Hanson’s set is similarly contradictory, making use of classical themes with modern frames. Without limitations of time and place, Twelfth Night is not only more fun, but more expressive. 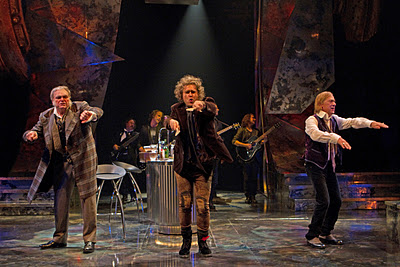 Current artistic director Des McAnuff has had great success so far with his musical interpretations of Shakespeare’s comedies (his surrealistAs You Like Itdelivered the most rousing ditties I’ve heard from my beloved comedy) and Twelfth Night is certainly not an exception with music composed and arranged by McAnuff and Michael Roth. “The Passionate Shepherd to His Love” is a particularly great time as a sort of group cabaret number and the disruptively fun “Hold thy Peace” is simply outrageous. Who knew Ben Carlson was secretly a rock star? I, personally, had no idea, but his vocals as troubadour fool Feste are kind of massively impressive. Throw in a cameo by John Lennon delivering a pizza and Twelfth Night is nothing short of rock and roll.

McAnuff, a notoriously restless director whose roots are more in the higher octane Broadway world than in the text-heavy Shakespearean one, injects the production with further vibrancy by staging scenes in fun and interesting places. I’m a big fan of giving characters something to do in a scene apart from emote, and McAnuff’s various batting cages, tennis matches, golf games and steam rooms give the scenes good context and the actors more business to play around with. (The steam room also allowed for an incredibly amusing, I’m assuming accidental, mishap involving Sir. Andrew’s towel).

Cast-wise the production fares well, though the early-season injury of leading lady Andrea Runge does hinder it irreversibly; standby Viola Suzy Jane Hunt puts in a valiant effort but sadly comes up a bit short. Coming up far from short, however, is Cara Ricketts, an actress I’m so glad to finally get the chance to like. Her Maria is funny, smart and feisty, holding her own alongside stage legend scene partners like Brian Dennehy and Stephen Ouimette- a superb Sir. Andrew whose comic pauses prove twice as funny as his lines. Juan Chioran does excellent work in the completely cut-able character of Fabian, a testament to the value of bench depth, and Mike Shara is exactly as I expected in his perfectly cast role as Duke Orsino, meaning daffy-proud, a bit bewildered and utterly excellent. Sara Topham is better here than everywhere else but is still unspeakably annoying (has anyone ever tried her on a part that won’t allow for her girlish affectations? I wonder if they might go away with proper casting like Ricketts’ did). The great Timothy D. Stickney is wasted in the minuscule role of the sea-captain who saves Viola, but Michael Blake delivers a refreshingly confident performance as the oft-silly other sea-captain Antonio, who saves Sebastian. Trent Pardy is mostly un-noteworthy as Sebastian, though most likely chosen for his remarkable resemblance to Viola (both Runge and Hunt).

But as much as I loved the work of many of the aforementioned actors and, of course, McAnuff’s inspired and flat-out fun interpretation, Twelfth Night belongs to one man and one man only, Mr. Tom Rooney. I feel like I say this every time I sit down to write anything at all about The Stratford Festival but Rooney really is the best performer I think I’ve ever seen live. The chameleonic and unassuming actor was faced with two potentially very similar fops this year in Merry Wives’ Master Ford and Twelfth Night’s Malvolio, but he manages to play them as hugely distinct from one another. While Ford is frantic, jealous and silly, Rooney plays Malvolio as serious, tragic and surprisingly smart. He does what all great Malvolios should do, which is play the broad comedy as though it were his own personal tragedy. His highly capable Malvolio may be a victim of his own pride but as seen through Rooney’s all-consuming eyes it becomes clear what most audiences have never really noticed before- that Maria, Toby and co. are torturing and tormenting a mostly innocent man because they don’t like him very much.

By the time Malvolio is trapped in a glass cage, held in a straight jacket, the audience is left to reconcile the great fun they’ve been having with McAnuff and Roth’s musical sojourns and Ouimette’s brilliant sense of irony with the reality of Malvolio’s mistreatment. In a risky move with excellent payoff, Rooney plays Malvolio’s ending with the grit of a Titus character vowing his revenge, because Malvolio doesn’t know he’s in Shakespeare’s beloved comedy. For him and to him, it’s always been The Tragedy of Malvolio; or what you will.

This production is simply fantastic. It’s accessible and fun for easily bored Shakespeare cynics and refreshingly different for those who’ve seen the oft-produced Twelfth Night perhaps a few too many times. But for the real text lovers looking for greater meaning even in the comedies, Rooney is there with the most poignant arc of the entire season.

The filmed version of the production hit theatres today (March 10, 2012), bringing the awesomness to those tragic enough to have missed it live in Stratford. Though the camera misses the occasional moment, up-close, the performances are all the more impressive and the music is almost as rousing as when it was performed live. It turns out that Ouimette towel-slip was purposeful, by the way. For the most part, seeing Twelfth Night again now (on screen, months after seeing it in the theatre), it’s just as great as I remember it- better, even, as the great Andrea Runge assumes the role she was meant to play and predictably knocks it out of the park (savvy cross-dressing women are her wheelhouse, one she’s exceptional in). Even without the tangibility of live performance, such creative staging and extraordinary casting makes for a cinematic experience as raucously fun as the real thing.

Make sure to catch Twelfth Night in movie theatres for one more (ONLY ONE) encore screening on Wednesday, March 21st at 7pm. You really, really don’t want to miss it.

2 Responses to In Stratford: Twelfth Night