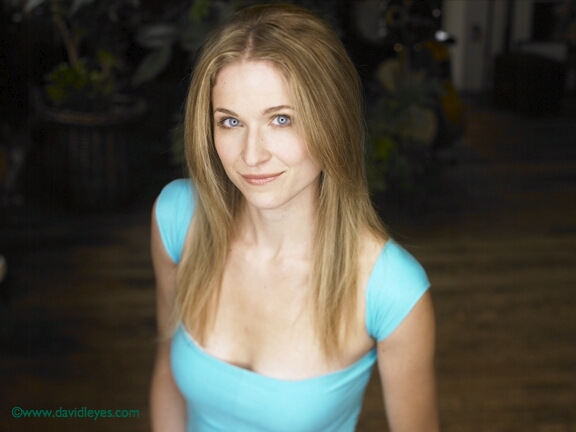 Here with our first interview of the series is one of My Theatre’s favourite actresses. Stratford leading lady Andrea Runge is nominated for her performance as Rosalind in As You Like It.

She took a few minutes to answer some questions for us. So, without further ado:

Can you remember your first experience with theatre?
–I saw The Secret Garden at the Globe Theatre in Regina when I was 6 or 7. There was a scene between Mary and Colin that was lit by a beautiful shaft of yellow light. I don’t think I knew then that I wanted to be a part of the theatre – it was just a really beautiful moment to experience.
What actors and actresses have always inspired you? Are they the same today?

-I am constantly inspired and re-inspired by actors – the list is too long, and constantly evolving.

Describe the experience of the Birmingham Conservatory. Do you feel that it was valuable in getting your foot in the door at Stratford?

-I was already in the company and had casting for the next season when I was asked to join the conservatory. What it did was focus completely on classical theatre training, which was a great experience to have before going into rehearsals for As You Like It. It was great to spend more time at the festival, especially on the festival stage, as well as having time to explore classical text without the pressure of public performance.

Describe your first day of rehearsal at the Stratford Shakespeare Festival.

-I was so nervous I don’t remember much of it. I do remember, however, looking around the table at every actor (including Brian Bedford, the director of Earnest) and thinking how I had seen everyone’s work before, either on stage or in flim/tv. It was so intimidating. And tremendously exciting.

You’ve made your name at Stratford playing gutsy and witty comedy leading ladies. Would you say that’s your main wheelhouse?

-Maybe for right now? But I’m at the beginning of my career, and I have no idea what direction it will take me in.

Who are some of your favourite people on the Stratford stage professionally and personally?

– There are a lot of people I’ve met and worked with at Stratford who have had a great influence on me. In particular, this past season I spent a lot of time with Lucy Peacock, who was a great mentor for me while prepping, rehearsing and performing Rosalind. The entire cast of As You Like It was a really special group of people – I had a great time working closely with Cara and Paul (Celia and Orlando), but everyone in that cast was a huge support on and off stage.

I once saw you in line to see The Tempest mere hours after performing As You Like It. Do you try and see every play in the season?

-I see everything at least once. It’s part of the fun of being a part of a big theatre festival; I love seeing friends and fellow castmates in different roles. Also, I’m a pretty big theatre geek all year round – I confess, I have seen more plays than movies in the last few years…

Tell me about Rosalind. How did you approach the role? Did you do anything specific to prepare? Are there any key components that a great Rosalind should have?

-I don’t know what a “great Rosalind should have” – other than a big heart and a love for adventure (although I suppose that’s a requirement for all of Shakespeare’s women?…). I spent a lot of time on the text before beginning rehearsal – figuring out exactly what Shakespeare was telling me about her. Once in rehearsal, it was about playing, figuring out my relationships to the other characters, and finding the capacity to love as greatly as she does.

The production of As You Like It juxtaposed surrealism and totalitarianism, featuring deer in three piece suits smoking pipes, tree people and a giant human heart suspended from the ceiling. Insightful/helpful or distracting?

-I think it was a really interesting design, and a full and complex world was created that allowed the story to have a context that worked with the text, which I believe to be the purpose of a ‘concept’ or design. But the visual concept is the job of the design team, and director. My job is to tell a story from the point of view of one character, so I didn’t see it as ‘insightful or distracting’, as you say. But I was happy to play on such a beautiful set, as well as wear clothes that I felt really suited the character (especially Ganymede’s suit – because the clothes initially ‘make the man’. That suit is important!)

Next season you’re slated to take on Viola (Twelfth Night), a character much like Rosalind in many ways, both superficial (both dress like boys) and thematic (both struggle with the loss of family through death or banishment). How do you plan on distinguishing the new character?

-Although Viola also spends most of the play disguised as a man, and has lost her only family member (her twin brother, whom she believes to be dead), she is very different from Rosalind. Namely, she doesn’t have her best friend at her side, but is completely alone; the man she is in love with doesn’t know ‘the real’ Viola even exists, as opposed to Rosalind meeting Orlando as herself in Act 1; and Viola has no choice but to stay disguised, whereas Rosalind was able to make the decision to reveal herself at the end of the play. I have a feeling that Viola’s journey is much lonelier than Rosalind’s.

You’re also playing Anne Page (The Merry Wives of Windsor), how will she factor into your season?

-Anne will be great fun- she may not be as complex as Viola, but she is deeply in love, and willing to rebel against her parents for love, which sounds like a pretty great journey. I’m very excited about the cast of Merry Wives, and thrilled to be working on the Festival Stage for both productions.

When do you start rehearsals for next season, any word on what the productions will be like?

-I begin rehearsals for Merry Wives in March, and Twelfth Night in April. I won’t know of any details on designs until the first day.

What are some of the challenges of repertory? Do you ever find yourself mixing the plays up?

-What I find most challenging of repertory, is the inconsistency of running the shows. For example, last year I would often have 4, and as many as 7 days between performances of As YouLike It. I found it difficult to keep the play in my mind and body, and imagination for that long. What’s great about rep, is that every play, and every character informs the next one – especially in Shakespeare, so in a way it’s like moving ahead twice as fast.

You’re currently working on The Misanthrope with Tarragon Theatre. How does that production compare to your previous work?

Andrea Runge is currently performing the role of Jennifer in Martin Crimp’s version of The Misanthrope at Tarragon Theatre in Toronto. The play runs until February 6th. Click Here to purchase tickets. And don’t miss Andrea next season at the Stratford Shakespeare Festival.