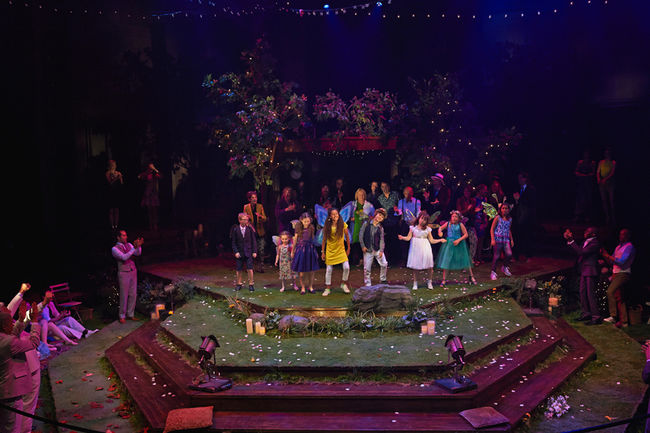 Occasionally (and I mean very occasionally, sadly) I see a Shakespeare play that makes me deliriously happy. This was one of those plays; the first at Stratford since Des McAnuff’s glorious 2011 Twelfth Night. I got a little bored in Act 5 (Act 5 of Midsummer being one of my least favourite things ever) and Liisa Repo-Martell’s Helena left me a little underwhelmed but I would go so far as to say that almost everything else about Chris Abraham’s large-scale production is near-perfect (and must not be overshadowed by the headline-grabbing Chamber Midsummer playing alongside it in rep).

Abraham’s Dream is all sorts of great things- excellently cast, wildly funny, visually beautiful, really moving- but it is, above all else, the thing I value most in any interpretation of an old text: thoughtful. Each character beat, each aesthetic choice, each line of dialogue is carefully considered, making the world’s most over-produced play new again.

With the theme of performance already in the text, Abraham adds another layer and turns the Festival Theatre into a backyard wedding reception where friends of a pair of adorable newlyweds (Josue Laboucane and Thomas Olajide) are preparing to put on A Midsummer Night’s Dream as a surprise wedding gift. It’s not a particularly original frame but the cast is so winning that it adds a lot to the production, starting with a touching opening wherein the ensemble sings “The Book of Love” and allowing the actors to play around with the fourth wall and show a bit of their own personalities and relationships (this was best illustrated by the great and hilarious Jonathan Goad at Sunday’s performance as he playfully broke character to torture Mike Shara whose Demetrius was frozen in an uncomfortable position; “how’re your abs doing?” he inquired, forcing a laugh from Shara and earning a roar from the audience). The frame also makes room for standout actors to make forgettable characters into highlights of the production, a phenomenon best represented by Maev Beaty who steals plenty of scenes in the unlikely form of Hippolyta (matched perfectly by the unassailably charming Scott Wentworth as Theseus).

Having the married couple in the frame be same-sex might have been something of a stunt in the hands of a lazier director but Abraham takes the concept further, finding contemporary truth in Egeus’ distaste for Lysander and the limitations placed on Hermia’s love by casting Tara Rosling in the usually male role. Rosling proves to be a strong steal from the Shaw Festival, delivering an extremely funny and natural take on Lysander. Bethany Jillard balances Rosling as the perfect Hermia- sweet and girlish but savvy and self-possessed (she brings a tent to the woods!), highlighting what is arguably the production’s best scene (the fight between all four lovers) with amusing tiny-person fury and total willingness to be soaking wet and covered in frosting. Mike Shara is the last piece to the beautiful puzzle that is this set of lovers, bringing fantastic physical comedy (particularly when sharing the stage with Goad) and superb timing to the pretty obnoxious character of Demetrius. One of Stratford’s most consistent players, Shara hasn’t delivered a single performance I disliked in all 6 seasons he’s been at the festival, giving him one of the best batting records in theatre. Again, I didn’t love Repo-Martell’s desperate Helena but that could be more of an overshadowing problem than an under-performing one.

The alternating Titania/Oberon casting, however, is a choice I’m not sure works as beautifully as most of Abraham’s others. Goad is a fantastic Oberon- sly, masculine, hard-headed, sarcastic- but I was never quite sure whether I was meant to laugh at Evan Buliung’s Titania or take her seriously. Conceptually, I like the idea of taking her seriously but in practice I’m not sure that’s a realistic expectation. Buliung hams it up a bit (though less than I expected from the often pretty hammy actor) but definitely takes his moments to simply play the queen, ruling over the best assemblage of fairies I’ve seen in any Dream (a delightful mixture of adorable, feisty children who may or may not sing Bruno Mars songs and a quartet of brilliant tap dancers stolen from the Crazy for You cast).

Stephen Ouimette as Bottom is one of those casting choices that makes you roll your eyes at its predictability but then regret rolling your eyes because he really is always great, especially as a human rather than an ass. Bottom aside, Abraham’s production breaks a lot of tradition in finding new ways to view the characters. Hermia’s father Egeus (Michael Spencer-Davis), for example, is played as a deaf man. Why? Because it taps interestingly into the communication and power struggles already in that under-explored character and broadens the world of the play even further to include a community rarely represented on stage at all, let alone in classical theatre. Why not? Screw you, why not. Because these plays are 400 years old, there are no rules anymore, let’s make Lysander female and Egeus deaf and open up the coveted role of Puck to an older woman (Chick Reid), a demographic heretofore not known for playing sprites.

The production’s strongest choices are all character and theme-focused rather than getting trapped in aesthetics like so many other shows. Designer Julie Fox’s costumes are witty rather than flashy and her set stands out for its gimmick-free beauty, especially as aided by Michael Walton’s fantastic lighting. The wonderful sound design and original compositions are by Thomas Ryder Payne who joins the cast onstage and even receives a few cues from some of the more manipulative characters. Everything from the most simple flying hotdog gag to the complicated verse translated into ASL to the showy musical numbers that somehow don’t feel forced works together in an expansive, beautiful, forward-looking world that’s at once laugh-out-loud delightful and honestly moving. Dream is hard to stage as a result of having been staged far too many times but Chris Abraham opened the doors to Dream again and made me see that it still has within it all the potential in the world.