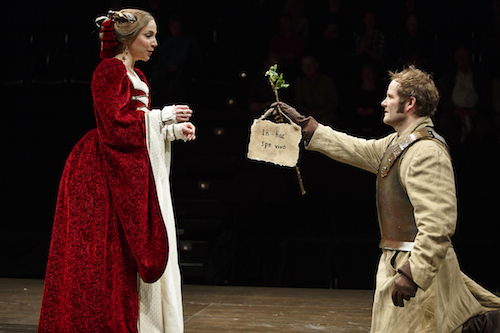 An odd, rarely produced adventure at sea that many Shakespeare fans have never seen, Pericles is the only one of the four Shakespeare plays currently at the Stratford Festival to be relegated to one of the smaller theatres. Dreary Hamlet, overly traditional Shrew and uneven Love’s Labours are all playing on that famous festival stage but their outcast little brother is the best of them, relegated to the tiny Tom Patterson but outshining them all.

The repertory system at Stratford works on tracks, meaning that the same group of actors usually appear in the same set of plays. This year, the three mainstage Shakespeares share a track, leaving out Pericles and making outlier Deborah Hay the only Pericles castmember with any other Shakespeare on her plate (she’s also Katherina in The Taming of the Shrew). Instead of the usual cast of classical performers, Pericles features a surprising percentage of the Carousel ensemble, including strong and consistent leading man Evan Buliung who (along with Hay) is a rare performer with a foot planted solidly in both classical and musical theatre. The strange casting supports the strange but effective interpretation of the text that surrounds the story with beautiful original music by Paul Shilton and even sees the characters bursting into song when Shakespeare’s words are no longer enough to express what they feel (“The Pearl”, sung by Buliung with lyrics by Marion Adler, is a surprising highlight of the show).

The music adds interest to the transitions with subtle choreography by Carla Bennett creating a fluidity of movement that reflects the ever-present sea and the ever-changing reality of our hero. Director Scott Wentworth’s light-handed but unconventional vision of the play is a strong and accessible approach to an unfamiliar text, bolstered by Hay’s resilient delight of a Thaisa and the ever-engaging Buliung in the title role.