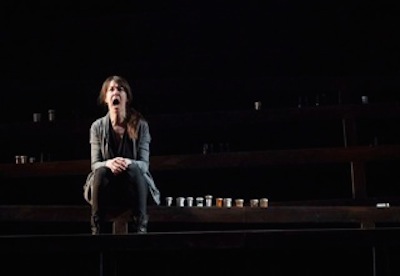 Laura Condlln is the first person to make a third appearance in the Nominee Interview Series. A rare back-to-back-to-back nominee, Laura was first up for our Best Actress award for 2011’s Merry Wives of Windsor before becoming the reigning Best Supporting Actress with her charming turn in 2012’s Matchmaker. In 2013, she left the Stratford stage in favour of a far darker place- a Sarah Kane text.

Laura’s brave and stirring performance as a woman tortured by clinical depression in 4.48 Psychosis at Canadian Stage earned her her third nomination in a row- Best Actress in a Play. And, because she’s one of the loveliest stars around, she graced us with yet another batch of thoughtful answers to our toughest questions.

4.48 Psychosis is a somewhat abstract text able to be played by any number of actors, including just one. How do you think a three-person cast supports the play?
The structure of Psychosis is often referred to as a ‘tone poem’ and, as you say, can defy restriction or containment. It can be anything in performance. Our director chose to cast it with three, and defined each role: the Patient, the Lover, and the Doctor. I feel this helped add clarity to the elusive and abstract nature of the narrative for both us, and hopefully the audience. I do feel that one of the most fascinating aspects of the piece – because of its fragmented form, and endless possibilities in terms of casting – is that you are unlikely ever to see the same interpretation of it. Ever.

Did you do much research into clinical depression? Where did you draw your inspiration?
Clinical depression was present in my household when I was growing up, and was a very dark and haunting presence for most of my childhood. I have very vivid and visceral memories of that time, and though my mother was never as sick as ‘the Patient’ in the play, there were some images and events in the text that were familiar. And full confession here: While I was growing up I didn’t have much patience for the disease. Sarah Kane wrote that the writing of 4.48 Psychosis came from a need to express and articulate what suffering with severe depression was like. This kind of call to action – from beyond the grave – from the playwright, combined with a reflection on my past, became the inspiration to approach the whole narrative as honestly as possible – without judgement – as close a representation as I could create using the words given to me by someone who knew. Even though obviously I could never truly know what it’s like from the inside, having not experienced it myself,  I had to try to ‘go there’. Let the disease be heard – give it a voice.

We also had an fascinating discussion with Dr. Jonathan Downar, a psychiatrist, who came and spoke to the whole cast one afternoon in rehearsal. He was fantastic and deeply informative and helpful.

How did your manifestation of the disorder change throughout the rehearsal process?
Our director Vikki Anderson is incredible. She is deeply collaborative and the base note of the entire process was the freedom to explore. Because Kane’s dark and beautiful text morphs and changes from paragraph to paragraph – from heightened, rhythmic verse, to vividly imagistic poetry, to lists of numbers, to clusters of seemingly random words that are actually terminology used in LABAN, a movement analysis often used in theatre training- just when you think you discover a line of continuity and clarity in the narrative, it shifts to something else in a completely different form and structure. It’s a wild ride on the page, as well as off. The possibilities are endless. There was an invitation in rehearsal to be unconventional and explorative – especially physically – in the discovery of how to express this powerful language. I found it very liberating and exciting. We had an incredible two day workshop with a brilliant movement coach named Rebecca Harper who guided us through physical improvisations that led to astonishing discoveries between the three of us. That work led to choices I never would have thought of on my own, and once I was part way down that rabbit hole, even though it was a bit scary, I just wanted to keep going and discover as much as I could.

Is that something that’s hard to shake when you leave the theatre? How did the play affect your own mental state throughout rehearsals and the run?
I think sometimes one of the hazards of being an actor is that you get ‘stained’ by your work. Our job is to be awake in the world, and be compassionate, empathetic and porous enough to reflect and embody humanity and all its stories. Sometimes those stories are really bleak, and when you give voice to and live inside those stories – even in a play that is obviously ‘make believe’ – it can linger and haunt you beyond the stage. My mind was very full during the rehearsal process – my imagination went crazy – I went to hot yoga a lot to sweat and seek calm, and I ate a lot of chips….  During the run I found that by 4 in the afternoon I was already thinking about, and getting into a kind of zone for, the show. It sounds ooga-booga but I guess it’s what I needed to do, mentally. And after each show I found it hard to socialize, as one usually does at the stage door or whatever. I was a bit slow to come out of it and be myself again – I always felt in a bit of a haze, maybe a bit shell shocked. But nothing that a small splash of scotch wouldn’t cure, and sharing a nightcap in the dressing room became a nice tradition to end the night.

There are so few narratives about depression. Did that add a sense of responsibility to your role?
I think so. It was difficult to give voice to a character so convinced of the need to commit suicide. That was hard. She starts the play resigned to that decision, and though she entertains other suggestions of cures and possibilities from the other characters, she ends up exactly where she started. That’s not an easy story to tell – but it most definitely has a place in the conversation about mental illness, and so I’m very glad we were able to give it a voice. It sparked a lot of debate from audience members, who were often polarized in their points of view, but no matter how they felt about the show at least there was a lobby full of people talking about a topic that has for so long held a terrible social stigma.

How did the idea that this was Sarah Kane’s final piece before her suicide affect the experience of presenting it?
It was one of the first things we talked about during our extensive table work about the piece – you have to, you can’t ignore it – and though this fact was not central to our director’s vision, I became obsessed with it. Frankly, I became obsessed with Sarah Kane. I read everything by her, and about her – devoured everything I could find, plays, books, reviews and interviews. Especially the accounts and recollections of the last few weeks of her life – the EXACT time she dropped off the final draft of Psychosis to her literary agent and friend. It’s so clearly her voice in the piece – her need to express the chaos in her mind – and I felt a great responsibility to her.

Did you have a favourite moment in the production?
I loved taking out a marker and writing FUCK YOU on my arm. An act of total defiance, and yet somehow so satisfying in the moment, every time.

What’s coming up next for you/what are you working on now?
[I was just at] Soulpepper playing Annie in a remount of The Norman Conquests trilogy by Alan Ayckbourn. Then I’m lucky enough to head to Montreal to work at the Segal Centre in a production of Top Girls by Caryl Churchill.

Is there anything you’d like to add?
Thank you for this wonderful nomination. What an honour!