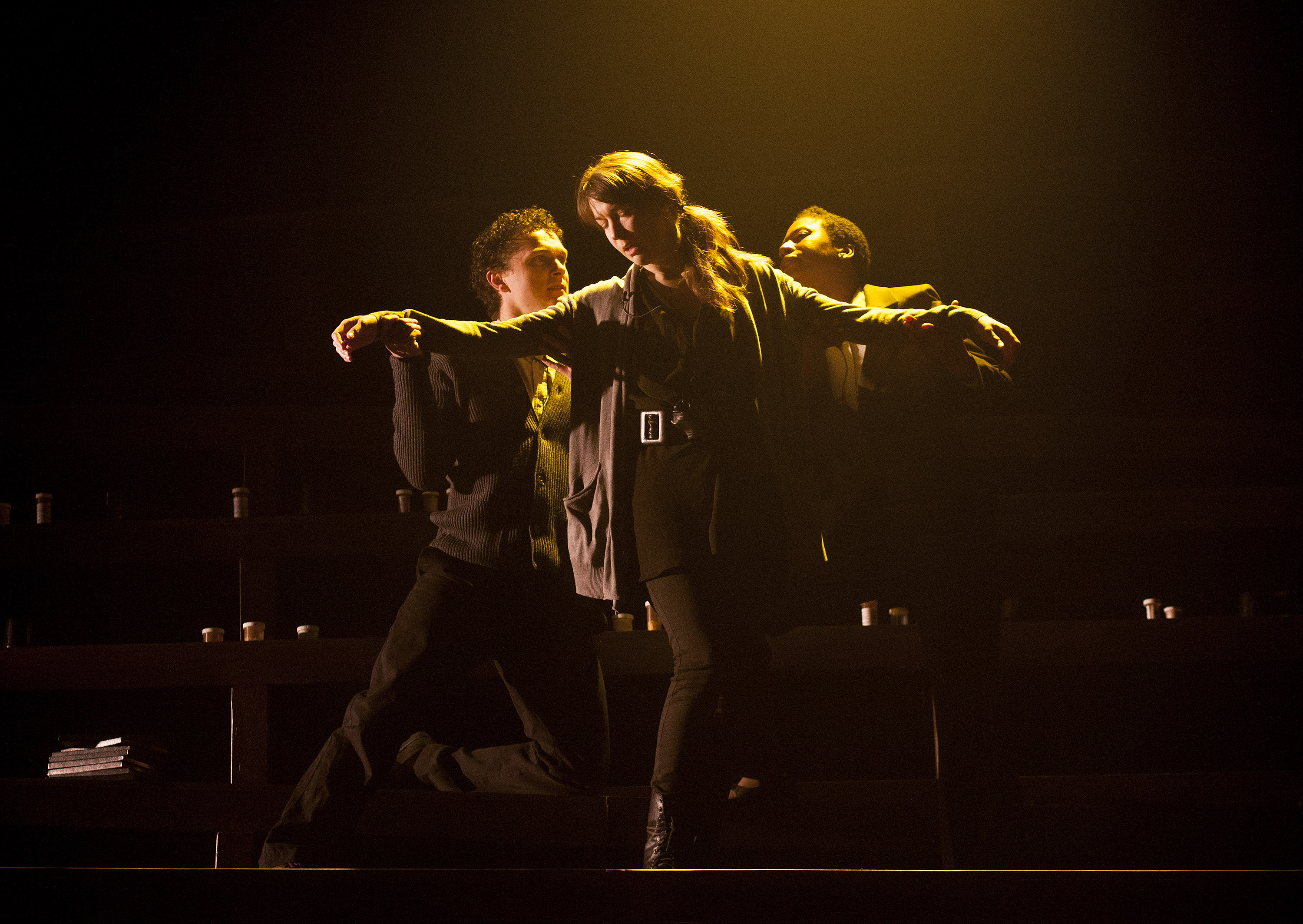 The Psychosis of Sarah Kane

I am not the person to talk about Necessary Angel’s current production of 4.48 Psychosis. Abstract, poetry-driven contemporary theatre is not my cup of tea to begin with, but more than anything I say I’m not the person for this task because 4.48 Psychosis is a deeply personal piece about a woman whom I never would have been able to understand if I’d encountered her in real life. Critical though I may be, I think I’m a pretty empathetic person for the most part. If I try hard enough, I can imagine (with varying degrees of accuracy) what it must be like in almost any pair of shoes, something that’s allowed me to understand artistic outputs that speak to any of the billions of things beyond my small little life. But I have some sort of seemingly insurmountable block when it comes to mental illness. All my empathy skills go out the window and no matter how the information is presented to me, I just can’t really understand it. I have no personal experience I can come close to similizing, so the struggles of mental illness- prevalent and terrifying and tragic as they are- have always lain, for me, on the other side of an artistic wall, like something written in a language that I not only don’t speak but can’t recognize the alphabet.

Or maybe I am the right person to talk about 4.48 Psychosis, because one of the things the play did manage to convey to me is the utter frustration of dealing with something so very hard for an outsider to understand. I may not have been able to relate to Laura Condlln’s character as she grappled with a depression so crippling that it completely defined her- I may not be able to wrap my head around that sentence at all- but I could relate to Bruce Godfree’s character in his struggle to not blame her but to also not lose himself in trying to save her. And, more importantly, I understood the importance of the struggle to be understood and how important that clearly was to Sarah Kane who wrote 4.48 Psychosis as a sort of self-explanatory final word before hanging herself by her shoelaces. One critic called the piece “a 75-minute suicide note”, and the smallest bit of research into Kane makes it very hard to see it as anything else. It’s a visceral, emotional, strange, fluid piece of theatre that seems to have the singular goal of making someone, anyone understand what was going on in Kane’s entire being while she was writing. It’s a self-portrait left by a playwright who knew her actual self was about to die. On that count, it’s disturbing and somewhat self-indulgent, but because it’s so utterly truthful, so apparently real, it also stands a real chance of making someone who is currently struggling feel like there was once someone where they are, even if she’s gone.

Necessary Angel’s production is excellent and My Theatre-favourites Condlln and Godfree are every bit as good as I’ve come to expect from them. Condlln does a breathtaking job of diving into Kane’s terrifying world head first, playing the piece’s central figure- an unnamed person with little more than her desperation and anger to define her. Kane’s text doesn’t provide character information or stage directions or even indicators of how many people should be on stage and who should speak what, giving director Vikki Anderson almost unprecedented freedom. She uses it in ways that are almost cliche but are mostly thoroughly effective- visual metaphors abound from a silent battle between Godfree and Condlln to set up and knock down pill bottles to a crucifixion pose (the only choice I thought was ridiculous) to multi-faceted water imagery. Designer Yannik Larivee  facilitates the most successful of these images through his excellently obvious set design- a tiered stage that constantly sets the actors on separate planes, filled with pill bottles, alcohol, and coffee; the bottom tier has been smashed through to reveal a watery pit below. Obvious is not usually a positive word in a review, but here I think each obvious choice actually helps the message scratch its way into the viewers’ minds. Because this is Kane’s real experience, the parts of the play that are grounded in relatable, easily identifiable, common imagery and events have the greatest impact. It’s only when it got heady and dreamy, reveling in poetry and random word association, that 4.48 Psychosis reminded me of just how little I understand it.

4.48 Psychosis is dark and unpleasant. It’s visceral, yes, but it’s also so pessimistic that it’s ultimately not a particularly emotional journey for the non-depressed audience member; unless the emotion in question is guilt or hopelessness. It’s a picture so potent that, intellectually, I could clearly see what Condlln’s character was going through. But I feel that anyone who was able to feel it with her likely doesn’t need to be told what depression feels like.