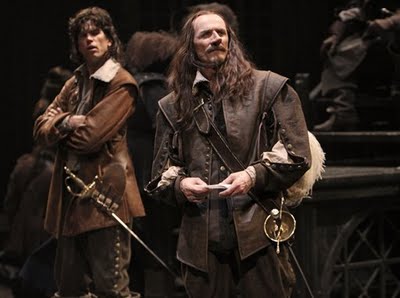 My Theatre Looks Back

Going through our My TV archives I discovered the following article in an “Obsessions of the Week” column from the days before My Theatre existed. As I embark on my Stratford 2011 top 12 rankings, I thought I’d share the article, if only for the nostalgic fun.

“I recently wrapped up my 7 show summer at The Stratford Festival of Canada with a weekend excursion that saw me and and a friend ecstatically applauding The Importance of Being Earnest, Julius Caesar and A Midsummer Night’s Dream. Earlier in the season I’d seen the festival’s colourful West Side Story, beautiful Cyrano de Bergerac, poignant Macbeth and idiotic A Funny Thing Happened on the Way to the Forum (the only thing I really didn’t like all season).

– the incomparable Colm Feore (known to TV fans from Slings and Arrows and 24) as the season’s notable guest star, leading a perfect production of Cyrano de Bergerac (under the direction of his wife Donna Feore, who you might remember as one of Triple Sensation‘s toughest choreographers) and a daring Macbeth that included artistic director Des McAnuff’s insightful vision of the Scottish tragedy as set in 20th century Africa with a semi-insulting forced parallel between an (unimpressively played) Lady Macbeth and first lady Michelle Obama.

– former Hairspray star Tom Rooney showed off his chameleon-like talents in the polar opposite roles of Cassius (the weasely mastermind behind Caesar’s assassination) and Puck (the charming, trouble-making fairy in Midsummer)

– Relative unknowns Laura Condlln, Jennifer Rias and Andrea Runge stood out in wonderfully vibrant productions of A Midsummer Night’s Dream, West Side Story and The Importance of Being Earnest, respectively.

– I finally got to see Slings and Arrows star Stephen Ouimette onstage in the lovely Earnest and the detestable farce A Funny Thing Happened on the Way to the Forum.

– Another notable Slings alum, Geraint Wyn Davies (who played season 2’s delightful villain Henry Breedlove) brought serious gravitas to his roles as the murdered kings Duncan and Caesar and then serious joy to the (often overplayed) role of Bottom, which he mastered.

– James MacDonald stood out among the directors for elements of sheer genius that permeated his interpretation of Julius Caesar.

Ultimately, however, my true Stratford obsession of the year is a young actor named Bruce Godfree, who is only in his second season with the festival. An alum of the Royal Shakespeare Company and a highlight of last season’s dismal Hamlet (he played Laertes, other highlights included the aforementioned Wyn Davies’ Polonius, Rooney’s Horatio and Adrienne Gould’s Ophelia), Godfree went into the Dream with the bar set very high (having replaced last year’s Romeo, Garreth Potter, who was supposed to take the role). Armed with incomparable energy, daring, commitment and solid classical technique, Godfree soared as the best thing about the excellent production of A Midsummer Night’s Dream, effectively making the (often boring) character of Lysander the most interesting on stage. He also kills himself in Caesar and kills other people in Macbeth, but Midsummer is where he truly shines.

If you’re able to get to Stratford, ON this season I seriously suggest 6 of these 7 plays (avoid Forum at all costs!): start with the Dream and make sure to see Cyrano, Earnest and Caesar along the way, you won’t regret it.

Oh Stratford, how do I love thee, let me count the ways!”