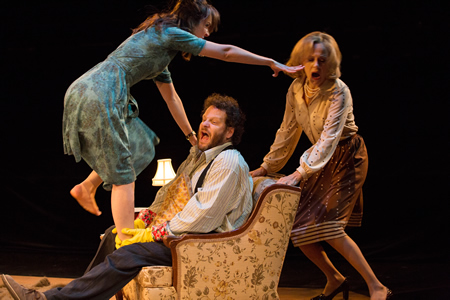 Following up their universally beloved production of Angels in America, Soulpepper has embarked on a fall program that is both varied and ambitious though not altogether successful, at least not comparatively speaking. 2013 was the season of the multi-part play at The Young Centre with The Norman Conquests ‘ three parts playing a key role. Unlike Angels in America, which divides into two plays meant to be seen in order as though it’s actually just one really long piece at twice the price, the various pieces of Alan Ayckbourn’s interlocking domestic comedy about schlubby librarian Norman are designed to exist on their own And as a whole, in any order. This is a fascinating proposition, not to mention a wildly ambitious playwriting challenge… if only Norman’s conquests were worth seeing three times.

While Table Manners, Living Together and Round and Round the Garden do all technically stand on their own and fit together well, none of them makes a particularly interesting individual piece nor are they memorable enough to really pay off the audience member who sits through all three (I saw the first two back to back at 1pm and 4:30 and still couldn’t recall the details necessary for the in-jokes). Without the other plays to supplement them, each piece of the puzzle is merely a skimpy comedy about somewhat unlikeable people making uneasy leaps in time with expositional bridges no more sophisticated than “you behaved very badly last night, Norman”. The overarching tale of Norman and the in-laws he tortures and seduces in equal measure is not altogether uninteresting. Rather, it has some really intriguing things to say about the human need for connection and attention. I think the whole thing would make the most sense as a site-specific marathon piece with the three plays broken up into chronological order, playing out at times simultaneously in different rooms of the same house (split the audience up Single Thread Much Ado-style). As it is, it’s incredibly hard to track character growth and motivations, or even basic plot, and the effect makes everything seem fairly trivial when it might not otherwise be.

Triviality is not what one usually gets from a Soulpepper cast of this ilk. The two pieces that make up the company’s fall season couldn’t be more different but what stood out to me was how polarized their casting patterns were. Farther West is populated almost entirely by new faces. A few of the cast members have done one Soulpepper show or two, but only a pair are actors associated with the company in any larger sense (William Webster and Jeff Lillico in the two smallest roles in the play). The Norman Conquests, on the other hand, has a quintessentially Soulpepperian cast with founding member Ted Dykstra at the helm and artistic director Albert Schultz headlining. Company stalwarts Fiona Reid and Derek Boyes are also in the fold, joining Oliver Dennis, the man who I’m pretty sure holds the record for the most Soulpepper productions ever (somewhere around 60). MyTheatre favourite Laura Condlln is an energetic addition as one of only 2 non-regulars in the cast (along with Sarah Mennell as Ruth). Generally, an assemblage of proven talents like this with a strong working and personal history makes for excellent cast chemistry, but it’s almost as if there’s a complacency in The Norman Conquests. Reid, for instance, casts her character Sarah as a slightly more functional reprisal of Kath from Entertaining Mr. Sloane (whom she played on the Michael Young stage barely two months ago). Dennis is, of course, delightful as the simple/sweet veterinarian Tom but how is he all that different from simple/sweet blacksmith Joe in Great Expectations? (I would also like to register a complaint that that dreadful hairdo is back). The loveable Derek Boyes doesn’t get quite as much play as some of the other major members of his Soulpepper generation so I’m not yet tiring of his earnest wheelhouse. While I acknowledge that I’ve seen similar performances from him before, I simply adored his take on dependable (and hungry) amateur boardgame designer Reg. With the exception of Mennell, whom I’d never seen before, everyone in The Norman Conquests delivers exactly what I expected of them, with almost a disappointing degree of accuracy. Even Schultz, who doesn’t appear onstage all that often anymore, brings a familiar Oscar-y slobishness to Norman. With his whitemanfro and scruffy beard, he looks a bit like a grown up Seth Rogen, if Seth Rogen had never grown up. He mules and pukes (neither literally, thank god) and whines his way through his conquests, his charm coming from somewhere largely inexplicable but thankfully believable (one can always count on Schultz for charm). Schultz’s Norman is at his best at the beginning of Living Together, wallowing in Annie’s sudden rejection of their weekend away yet pretending he’s not bothered. It’s in small moments of humanity like that- without the grand clownishness that follows the character the rest of the time- that Schultz hints at the complexity The Norman Conquests could have, were it dramatically redesigned.

Farther West, in contrast, consistently showcases complex characters living lives far more complicated than those of bored Brits swapping spouses. I’m not sure I particularly cared about most of its characters, but they are certainly interesting. Leading the pack is newcomer Tara Nicodemo whose captivating turn as May Buchanan, a prostitute in the early Canadian West, is bold, strong and still. She’s joined by a host of my favourite Toronto actors in too-small roles (Dan Chameroy, Jesse Aaron Dwyre, Jeff Lillico, Evan Buliung; Dwyre in particular does a lot with a simpering sidekick) and a general ensemble of fine performances (I particularly appreciated Akosua Amo-Adem’s comic relief). But this is Nicodemo’s production and she holds it down well; even the hints of a French accent that sneak through read enigmatically instead of like a mistake.

The first half of John Murrell’s text is full of masked sadness and chin-up getting by, harsh circumstances and strength from unexpected places and people; it’s really quite brilliant, creating an inspiring hero from an unlikely figure. But the second half loses steam. Breaking up the core group of women and pulling back from strong supporting turns like Chameroy’s empathetic Babcock, the action shifts (ahem) farther west and becomes more about May’s romantic tragedy than her self-sufficient survival. Director Diana Leblanc  stages the action excellently, making great use of an onstage body of water and set designer Astrid Janson’s splendid shadow-enabling backdrop and level-tastic slanted wooden path. The cast is full of singers who make a strong show of the recurring theme, especially Chameroy’s solo rendition that brings the audience back from intermission (sing more, Dan, sing more!) but some of that stylization seems out of place in a story as grim as this. Ultimately, Soulpepper’s final original production of the season (both Alligator Pie and Parfumerie are remounts) is a moderate success; it has a few incredibly poignant moments and plenty forgettable ones as well. The plethora of new faces isn’t usual for Soulpepper and thus the production doesn’t really have that magical repertory feeling. But that feeling is all over The Norman Conquests and doesn’t do it much good so perhaps Farther West is a needed influx of new blood.