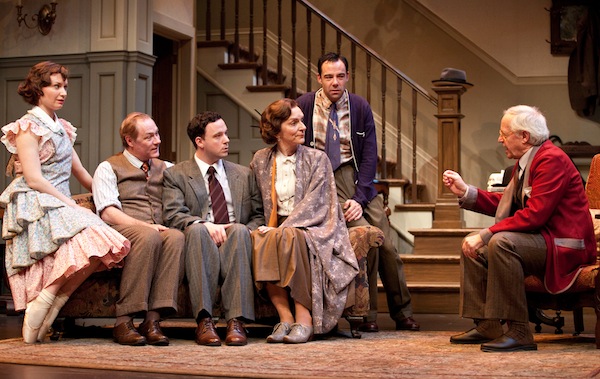 Soulpepper: You Can’t Take It With You

One of the most notable things about Soulpepper is the incredible bench depth the company has going for it. The effect is that almost every Soulpepper show feels like it has an all-star cast. This phenomenon was in full force on opening night of the 20th century American comedy You Can’t Take It With You. A simple comedy about a quirky family, the play is presented by top-calibre people from star director Joseph Ziegler, to the top-notch ensemble, right down to the apprentice stage manager (Ben Bavington, who, at 21, is literally the most efficient SM I’ve ever encountered). It’s hard to beat Soulpepper on the basis of overall company proficiency and You Can’t Take It With You is the perfect example of that.

In his interview for our 2011 Nominee Series, Gregory Prest pointed out that he was “happy to be doing the comedy You Can’t Take it With You after spending eight months in dark Thompson-Ibsen-O’Neill world”. That sense of the comedy being a pleasant relief is one of the things that makes it particularly great. Soulpepper is coming right off of what I called “Morphine Month”- a repertory period that featured a black black black comedy (High Life– starring Diego Matamoros and Mike Ross from You Can’t Take It With You) and an even blacker domestic drama (Long Day’s Journey Into Night– starring Prest, Ziegler and You Can’t Take It With You matriarch Nancy Palk). In fact, most “serious” theatre companies stay away from lighthearted fare like You Can’t Take It With You altogether and the result can be dizzying darkness-fatigue. What the Kaufman & Hart comedy does is lift you back up from where the ingenious but difficult Long Day’s took you. It’s an optimistic and big-hearted piece. It has a message, sure,- all things worth presenting do- but that message is nothing more or less than: You Can’t Take it With You, so be happy and be yourself while you have what you have.  It’s a lovely message and a lovely play. It doesn’t stay with you all that long after it’s over, but You Can’t Take It With You, while it lasts, is a welcome dose of happiness.

In tiny roles, the wonderful Diego Matamoros and Mike Ross have great, broad, goofy fun as a crazy Russian ballet instructor and the nervous/enthused son-in-law of the principal Sycamore family; had those roles been much bigger, they may have been tiresome but as they are they’re delectably quirky. Andre Sills steals his scenes as happy-go-lucky Donald next to Sabryn Rock‘s amusingly no-nonsense maid, Rheba. Maria Vacratsis suffers a bit under the most uselessly dumb role I’ve seen in quite some time- that of exiled Russian Grand Duchess “Olga”- and poor Raquel Duffy isn’t far behind her as the almost-as-useless Gay Wellington, her best gag being a passed-out role to the floor. But every other character is supremely well-used. Soulpepper’s go-to homerun hitter Nancy Palk plays perpetual hobby-switcher Penny Sycamore with infectious giddiness while Derek Boyes plays her husband with indelible warmth and fatherly sweetness. Their one daughter, played by Patricia Fagan, is a ball of quirkiness- dancing ballet in the living room to the tune of her husband Ed (Ross) on the xylophone. The other daughter is fairly normal, odd only by association with the eccentric family she loves so much. Said daughter, Alice (played with openness and backbone by the lovely Krystin Pellerin) brings home the boss’s son and quickly gets engaged, leading to a comedy of manners as he (purposefully!) brings his well-to-do parents into the topsy-turvey Sycamore home on the wrong night.

Brenda Robins and John Jarvis play the uptight Kirby parents with just enough sympathy to keep them multi-dimensional and, in  fact, right until the end I thought the play might do the unexpected by letting everyone be a good guy. Alas, Mr. Kirby’s outing as an unhappy man leads to a good old fashioned scolding of the rich folk- the unaccepting and immovable rich folk, par for the course. Said scolding is done, however, in such a charming fashion that I was forced to forgive the play’s predictable characterizations of the Kirbys. Eric Peterson‘s turn as Grandpa Sycamore- the untouchable free spirit who carries the message of the play as a life philosophy and thus delivers said moral/scolding himself- is great stuff. In the program note, Peterson points out  that “this is the first old guy I’ve played, since I started playing old guys, that isn’t grouchy and angry; who is happy and brave”, a point I found fascinatingly revealing. The Sycamores are happy and brave and that makes them, for whatever depressing reason, unique modern theatrical creations. And because of that, however goofy and lacking in deadly disease and alcoholism they may be, each member of the Sycamore family is a great part for the actor- none so much as the memorable, inspiring soul of the piece, Grandpa (the way he says grace alone…).

The final member of the cast is the plot lynch-pin-Tony Kirby. After he falls for his secretary Alice Sycamore, Tony ventures bravely and open-mindedly into her crazy home in act one to be greeted by a laugh-out-loud scene of personal space invasion, among other things. Later that night, he proposes to her anyway, shouting down her trepidations that her family is too outlandish to accept. Of course he can accept them, Tony loves her. This gets proven in act two when he brings his stuffy parents a day early to dinner at the Sycamores’, when they’re not prepared, when they’re just being themselves. For the Sycamores, “being themselves” means crazy Russians cooking blitzes and giving dance advice to Essie in full tutu while she passes out homemade chocolates, Penny wonderfully contemplating her latest script debacle (“I’ve sort of got myself in the monastery and I can’t get out”), Ed working away on a printing press or xylophone, Grandpa spontaneously attending commencement ceremonies, family friend Mr. De Pinna (a bumbling-sweet Michael Simpson) posing as a greek warrior and patriarch Paul testing homemade fireworks in the basement. That little act of rebellion, purposely mixing up the dates, is unbelievably brave for the sheltered, tentative Tony and makes him my favourite character (well, that and Gregory Prest who is so damn lovably sweet that I fell madly in love with him. Again). See, for the Sycamores, it’s as odd to be average as it is odd for the Kirbys to be odd, and Tony is the only character willing to bridge both worlds. He’s never as outlandish as Grandpa, as exuberant as Ed, or as excitable as Paul, but Tony steps out of his box and dares his parents (and the Kirby-tentative Sycamores) to see things a new way. Grandpa may speechify the moral of ‘be happy when you can’ but it’s Tony who insists he can ‘be happy’ with whomever he chooses and however he chooses- however odd or normal or combination thereof that my be. And that really feels like the moral of this happy-go-lucky, sweet-as-pie piece of theatrical comic relief: ‘be happy, whatever that means’.