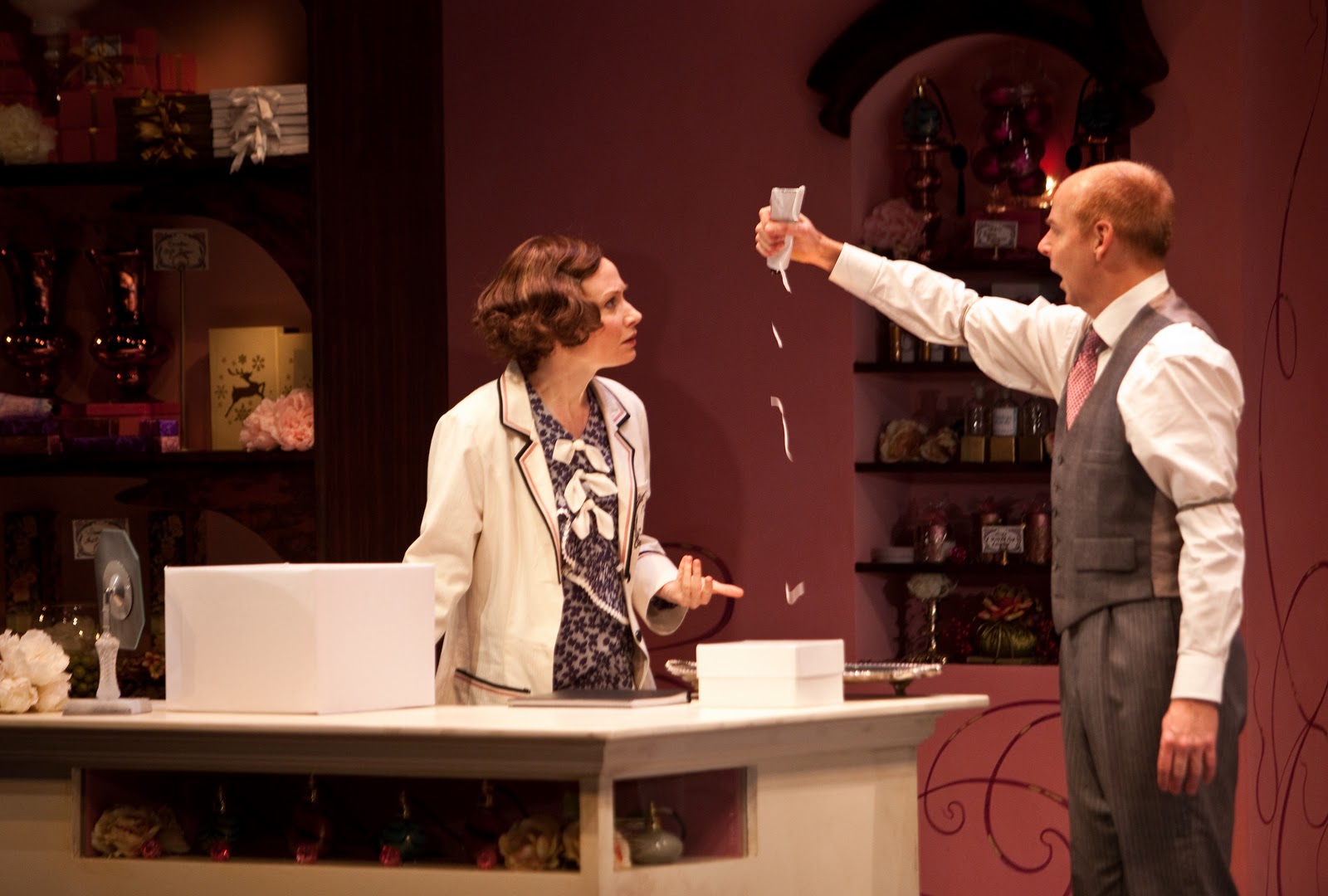 Adam Pettle and Brenda Robins’ 2009 adaptation of Miklos Laszlo’s 1937 Hungarian comedy Parfumerie, about the behind the scenes lives of employees at a beauty supply store, is not something you would assume would be a hit. But it is. Most performances of the Dora-winning remount have already sold out and a discerning friend of mine with superb comic taste called it her “absolute favourite thing at Soulpepper”. As directed by Morris Panych with beautifully whimsical set design by Ken MacDonald, Parfumerieis a delight of comic distraction and a brilliant showpiece for company MVP Oliver Dennis.

As George Asztalos- an unexpected romantic lead, as bitter as he is sweet- Dennis is tremendously charming. With a cheerful face, brisk voice and stiff posture, his Asztalos contains all the contradictions necessary for his bungled double life as a daytime confrontational bachelor and nighttime anonymous letter-writing lover. When those worlds collide, the battle amongst Asztalos’ contradictory instincts results in some superb physical comedy from the always-wonderful Dennis.

As the woman whom Asztalos picks on and unknowingly woos pen-pal style, Patricia Fagan has just enough sass to keep up and just enough heart to ground the unlikely (read: not that surprising, also the basis for You’ve Got Mail) love story. Her chemistry with Dennis is at its best when they bicker, though their Act II slow-burn romance is plenty wonderful too.

The supporting cast is anchored by Joseph Ziegler’s endearing turn as shop owner Miklos Hammerschmidt, a fundamentally good man driven all sorts of crazy by the thought that his wife is cheating on him. Kevin Bundy is an appropriately skeezy/charming Stephan Kadash, the Hammerschmidt employee helping her with the cheating. Michael Simpson shines as a daffy do-right clerk who serves as counsellor to the love story and unfortunate fifth business to the infidelity plot. And the adorable Jeff Lillico gives the funniest performance of the lot as the upstart apprentice Arpad, whose mid-action promotion opens him up to an Act II full of riotous pride and self importance, bossing around the eager new apprentice Jancsi (Mike Ross, naturally, pulling double duty as the prat-falling and setpiece-jumping Jancsi and the accordion-playing Musical Director).

The practiced rhythms of the employees at Hammerschmidt’s store play like a well-oiled and quirky ensemble should, their less-highlighted interpersonal relationships just as developed as the main plots (the friendship between Dennis’ Asztalos and Ziegler’s Hammerschmidt is particularly moving). The pace may sag from time to time but vibrant performances make all the difference in Laszlo’s wordy comedy.

The Christmas-set comedy is the final piece in Soulpepper’s outstanding 14th season, a very sweet way to head into 2012. Helped along by the Distillery District’s annual Christmas market, a trip to the ever-so-slightly holiday-tinted Parfumerie is the perfect way to kick off the season.

Soulpepper’s current production of Parfumerie plays at The Young Centre for the Performing Arts in Toronto’s Distillery District until Dec 31st.