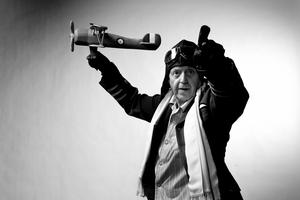 Billy Bishop Went to War a Long Time Ago

I saw Billy Bishop Goes to War years ago. The version I saw featured a middle-aged Billy boastfully recounting his historical triumphs and the antics of his charismatic younger self. It was light and full of energy, clear but reflective, a really enjoyable and engrossing piece of theatre.

But as the years have passed, creators Eric Peterson and John Gray have adapted the piece so that as they age they can continue as its only featured performers. Now, with the men in their early sixties, the piece doesn’t glisten the way it once did. Though Peterson powers his way through Billy’s story with more gusto than one could ever imagine for a man his age, he still can’t quite overcome the barriers of the new interpretation. In the hands of an older Billy, the story takes on more of the qualities of a memory play- the narrator less reliable, the details a little cloudy- and what was once proud fact unveiling and story spinning now feels like senile ramblings, a grasp at former glory. The play, like Billy’s ageing memories, feels muddled and befuddled, trapped behind the film of old age as both Bishop and Peterson attempt to remind the audience of their better days.

The most interesting aspect of the new production, part of Soulpepper’s summer season, is the set- a meta play on the theme of storytelling and the piece’s history. Strewn about the stage and filling in for everything from a nightstand to an airplane are various trunks and crates, each one stamped with the words “Billy Bishop Props” and the date and venue of Peterson and Gray’s performance. The trunks are a fourth wall-breaking acknowledgement of all that Peterson and Gray’s unique musical used to be and the fact that it can’t be that anymore.

I appreciate the artists’ desire to keep their deeply personal project to themselves; it’s been the centerpiece of their close friendship for 30 years. But there comes a time when they have to choose between maintaining the integrity of their work and setting it up to have a life after them or continuing the nostalgic fun of playing it themselves. That time has passed already, and I sincerely hope that Billy Bishop Goes to War is allowed to thrive on its own and in its original form from now on.