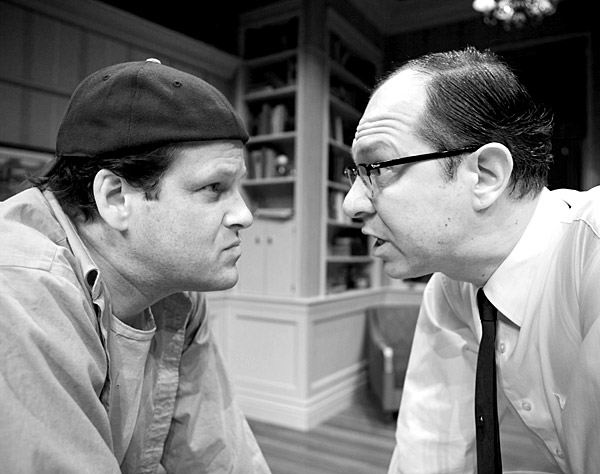 Meant for Each Other: Soulpepper’s Odd Couple

Without question, The Odd Couple is the first production at Soulpepper that I’ve truly loved. I liked The Kreutzer Sonata a lot, enjoyed The Glass Menagerie and was very impressed by the heft of White Biting Dog. But with The Odd Couple, Soulpepper has moved from a solid company I admire to one I will actively seek out- less like Tarragon and more like Stratford.

Neil Simon’s brilliant script- full of just as much heart as it has full belly laughs- is perfectly staged by Stuart Hughes. It’s simple and straightforward- Lorenzo Savoini’s set and Erika Connor’s costumes adding small character detail to the story without over-interpretation or distracting on-the-nose elements. They set the play in period without constricting it, allowing it to feel relatably modern without modernizing.

Giving life to Simon’s wonderfully detailed characters is a cast so good that even the low-line-count poker buddies sparkle. I was thrilled to see Oliver Dennis (whom I absolutely adore from his series-stealing performance as Jerry in Slings and Arrows but whom I’ve never seen on stage); his Murray is a precise and sympathetic guy’s guy anyone would be happy to have in their poker group- so long as you don’t let him deal. The dealer should be Speed, Michael Hanrahan’s hoot of a loudmouth. Derek Boyes and Kevin Bundy round out the motley crew of well-meaning sidekicks as the nervous Vinny and slick Roy- both well-developed despite their line-starved existences. Raquel Duffy and Michelle Monteith are cute but forgettable as eligible sisters, but this play really does belong to the men.

Then there’s the actual odd couple, two stars with major Soulpepper gravitas and a rewarding sense of abandon. Diego Matamoros is an excellent sad sap of a Felix. His neurosis has a lived-in quality that only a great character-study could achieve, his mannerisms so nuanced that he’s utterly recognizable and endlessly frustrating in his craziness. But the highlight is Soulpepper artistic director Albert Schultz as the king of schlubs Oscar. Schultz bravely puts his grossest cards on the table for the audience to gawk and shudder at (his potato chips and ketchup experiment is truly stomach churning). But he infuses the crass character with such a lovable heart and believable sincerity that you not only buy that he would welcome his just-dumped and slightly annoying friend into his home, you still like him after he kicks him out.

The Odd Couple is a ton of fun while maintaining its heart as a sweetly melancholy tale of friendship and the ways in which we torture each other. It’s really a great achievement by a truly wonderful company.

The Odd Couple plays at The Young Centre for the Performing Arts until November 19th.