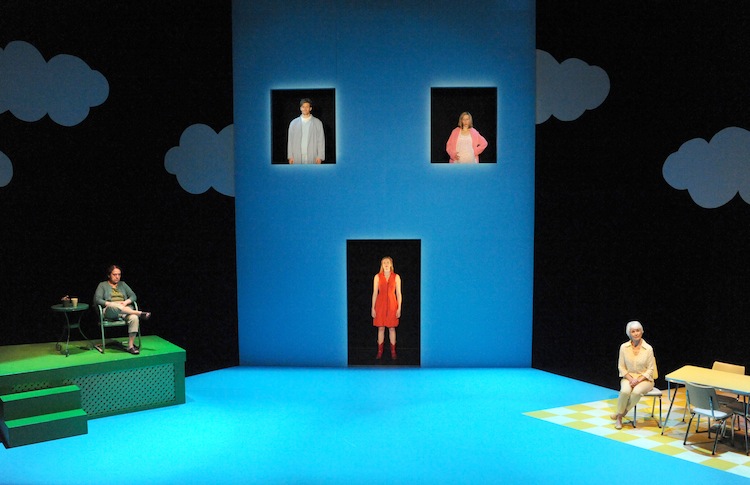 My mother is a very nice woman. She’s lovely, really, and everyone who has ever met her in the history of her existence on earth likes her because she is very nice and very lovely and generally crafts her life in a way that will produce as much happiness as possible. My older brother is like her in very many ways with his pick-and-choose-and-mold-yourself-til-you’re-happy approach; he’s handsome and smart and used to date a a tiny blond who wore a lot of pink and was essentially an intellectually un-complicated bundle of nerves, whom his sister (wearing a lot of red) judged harshly and treated with notable un-friendliness because she, unlike the rest of her family, believes the answer to happiness doesn’t lie in perfection- she is just as wrong as they are. Now, I assure you, this is as far as the comparison goes, because the family in Rose Cullis’ brand new work about the familial quest for happiness is all sorts of screwy, but the point stands that as impressionistic as their portrayals may be, as dramatic as their actions, as cartoon-hued the production, the human reality behind The Happy Woman is very real.

Cullis crafts a story about an all-grown-up nuclear family sans deceased, abusive father. Maria Vacratsis plays the omnipresent, all-seeing neighbour who serves as a quasi-narrator/confidante to the wackadoo inhabitants of designer Denyse Karn’s colour-coded world (Vacratsis, for her part, lives in the all-green world of her front porch, which she leaves only once). In yellow (and inhabiting a monochromatic yellow kitchen area) is Barbara Gordon as the titular Happy Woman, or, rather, a mother who processes just enough reality to allow herself to function happily. All. The. Time. Her striving-for-perfection son is Christian (in blue), played by the always wonderful Martin Happer, here outdoing himself in charm and empathetic conflicted-ness. Christian has a pregnant wife (Stasia, in pink) riddled with anxiety and, later, postpartum depression- a loopy Ingrid Rae Doucet whose girlish wonder wears but whose madness is thoroughly compelling. Then there’s Cassie, the star of the show and messed-up poster girl for useless younger-sibling rebellion (predictably, in red- the opposite of/most similar to Stasia’s pink). Played with superb bravery and intriguingly misplaced joy by Maev Beaty, Cassie is all sorts of self-destructive in her quest for fulfillment but, in the weirdness that makes her miserable, she manages to find a moment-to-moment happiness that the other characters lack.

From the second Cassie and Christian first shared the stage (all familiar physicality and comfortable banter), I had a sneaking suspicion that Cullis would take them to a wholly unnecessary place in order to firmly damn her Happy Family as irrevocably damaged. She did. But I wish she hadn’t. See, the pursuit of happiness is unbelievably universal and the contradictory ways in which we pursue it reveal the finite differences that make us who we are- that’s a fascinating concept. In The Happy Woman, Cullis explores that excellently (aided greatly by the visually inspired work of Denyse Karn and director Kelly Thornton as well as an across-the-board excellent cast) but she over-simplifies her own point with dramatic plot twists. Hers are complex and very real characters on an unendingly relatable journey- their tense relationships balance on power dynamics, resentments and fundamental breaches of communication that come from the simple reality of adult family life- they don’t need more than that. The more uniquely plagued Cullis makes them, the less the audience understands them, taking away what makes The Happy Woman special in the first place.