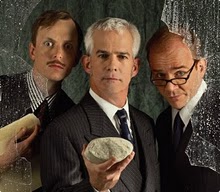 At the Shaw: On The Rocks

At 2 hours and 15 minutes, The Shaw Festival’s weakest production of the year drags unforgivably. The story of a weak-willed Prime Minister whose sudden socialist enlightenment causes great tumult, On The Rocks has within it some great themes of idealism in government and the importance of standing for something, but it falls to George Bernard Shaw’s most obnoxious tendencies.

The cast is passably good but not nearly as strong as the ten other ensembles at the festival (at least one of which features each of these actors in better roles). The accents skit about a bit, especially the tricky one taken on by Cherissa Richards as Dame Adhira Pandranath. Despite the occasional overdramatic moment, the rest of Richards’ performance is fairly effective, her Dame Adhira classy, tough and no-nonsense enough to command the room full of egotistical men effortlessly. Marla McLean is the best actress, however, nailing the region- specific accent of Miss Aloysia Brollikins and holding down what little comedy is left in the stilted production.

As for the men, Peter Krantz delivers an uneven performance as Sir. Arthur Chavender; he’s daffy-good in Act II but a bewildering robot Act I with perhaps the weakest accent of the lot. Martin Happer is charming but underused as Toffy, the Earl of Barking while most of the rest of the lot is so unremarkable they hardly bear mention. The exception is Steven Sutcliffe who runs circles around the rest of the cast with his fantastically funny and conflicted performance as Sir. Dexter Rightside.

Sir. Dexter, the play’s most vocal opponent to socialism, being easily the most engaging character in this production makes Shaw’s overt socialist agenda even harder to take. Adaptor Michael Healey and director Joseph Ziegler’s version of the play isn’t funny enough to overcome the preachiness in Shaw’s writing. The man was a brilliant dialogue writer, an endlessly clever social satirist and an excellent creator of characters. What he was not is subtle and the heavy weight of the hammer he uses to bang his audience on the head with his personal politics proves too much for the uninspired direction and the middling cast to overcome. 2 hours and 15 minutes of an unfunny uphill battle of backwards politics feels like an eternity.

On The Rocks plays at the Court House Theatre in Niagara-on-the-Lake until October 8th.