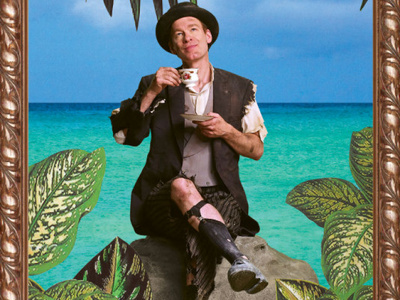 At the Shaw: The Admirable Crichton

What makes The Admirable Crichton so notable is that it’s the only Shaw Festival production in my top 5 that really fits with the festival’s brand. While not a GB Shaw script, This JM Barrie play enjoys the conventional staging, English accents and Shavian commentary on the class system that proved so ineffective in many of the festival’s other productions this season. But The Admirable Crichton is actually pretty great. It’s more than great, actually, it’s my favourite full length production in 2011 at The Shaw Festival.

Director Morris Panych leads a top notch team of designers, technicians, actors and musicians to a product that’s entertaining but also melancholy; sad but very funny. The use of a chorus of dapper singing animals (a wolf, a crow, a hare, a hedgehog, a fox and a crane) facilitates non-irritating set changes and gives the whole production the feel of a fable in the vein of The Fantastic Mr. Fox. The charming and capable singers (led by Billy Lake as the wolf) guide the audience through the story as though it were a children’s tale meant to illuminate as much as entertain. The effect softens the shock of some of Barrie’s crazier plot points and provides an appropriate framework for the moral lessons inherent in the text.

Designer Ken MacDonald’s set is both gorgeous and fascinating with lots of dimension and detail for the eye to discover throughout the play’s 2 hours and 20 minutes. The addition of a scrim downstage allows for some brilliant moments such as the interactive sketch of the play’s first setting that’s generated mid-scene and superimposed into the action.

Barrie’s excellent play is a solid jumping off point for the great execution and interpretation of the company. It’s an engrossing tale of an upper crust family and their loyal butler (the titular Crichton) who are marooned for years on a desert island and left to generate a new society before rescue returns them to the arbitrary rules of their old one. The text has lots of interesting things to say about societal structure, the natural order of things, wasted potential and resignation- and this production says those things well without an overly heavy hand. While stranded on the island, free from issues of economy and birth, the hierarchy of power reorders itself with the extremely competent Crichton quickly rising to the top of the ranks, his former masters taking on service roles and performing tasks they never thought themselves capable of (like hunting). Crichton’s resignation to society’s imposed and assumed order in the final act is heartbreaking, wasteful and angeringly stupid- in the best possible way. Watching Mary stifle her love and respect for her former fiancée and Crichton quietly stand aside and take orders from lesser men- it’s enough to make you want to pack up and move to a desert island. But the production never loses its comic edge. Amidst the fourth act pain is a wonderfully played awkward irony while the brilliant timing of the remarkable cast carries the earlier action to delightful heights despite the temporariness of the characters’ happiness.

The best in the cast is the wholly important Crichton himself- Steven Sutcliffe, an overarching star of the season, here in his more rewarding role. His steely gaze and grounded strength convey the character’s inherent leadership potential as early as the first act as he serves at the whims of David Schurmann’s quirky Earl of Loam. His reluctant warmth and approachable authority give Crichton a sympathetic ease as a leader, making his quiet discontent and uncomplaining longing all the more painful in the end. The audience never loses sight, however, of Crichton’s flaws- his submission, his rigidity, his thoughtless handling of Tweeny. Sutcliffe’s is perhaps the season’s most complexly constructed character and one of the most layered performances I’ve seen all year.

Nicole Underhay is the other highlight as the greatly changing Lady Mary Lasenby. Her spoiled princessery in act one is played with humanity and a refreshing lack of condescension, allowing the character her deserved redemption as the play progresses. Even though the play skips over most of Mary’s development into the rough and tumble adventurer she plays in acts two and three, Underhay plants the seeds of that spirit early enough that it’s not that jolting to see her emerge as sort of kickass. It’s similarly understandable that she would develop a strong connection to Crichton- both because she recognizes his greatness and because the weakness in her character draws her to those in power. Though Mary submits to the resumed order of things in the final act, Underhay masterfully portrays her pathetically masked longing for the happier days of the island and Crichton’s rule.

Kyle Blair is great comic relief as the lovable, reprehensible doofus Ernest Woolley and Marla McLean brings her trademark cutesy spunk to the innocent maid Tweeny. As in On The Rocks, Cherissa Richards struggles with her accent more than most but delivers a strong comedic performance alongside the excellent Moya O’Connell’s final Lasenby sister. Once again Martin Happer is sadly underused, his Reverend John Treherne serving very little purpose in the story, but he nevertheless delivers a performance that more than merits mention. The large ensemble is similarly full of wonderful, detailed portrayals- yet another amazingly strong cast all around.

If you only see one production at The Shaw Festival this year, make it The Admirable Crichton. More than any of the other really successful productions, this one does what the Shaw does and does it really well.

The Admirable Crichton plays at the Festival Theatre in Niagara-on-the-Lake until October 29th.