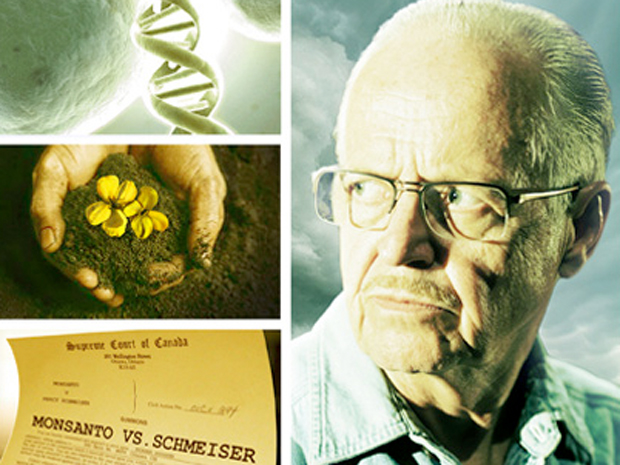 Walking into The Young Centre‘s Michael Young Theatre from the over-crowded lobby (on nights that feature Seeds alongside Long Day’s Journey Into Night in the Baillie, there’s an extreme claustrophobia leading up to the shows but, much more notably, during the simultaneous and thus wildly unpleasant intermissions), the set of the fantastically popular Montreal import Seeds has the sort of unexpected modern sheen that fits the piece perfectly and is a delightful surprise for a show without a concrete setting. The setting, really, is the small town of Bruno, Saskatchewan but the action flits between courtrooms, labs, farms and private homes as playwright Annabel Soutar (played onstage with fire, wit and pregnant exhaustion by Liisa Repo-Martell) presents what is supposed to be (but sort of isn’t) a balanced recounting of the ground-breaking legal battle between Monsanto Canada (a massive, manipulative corporation that develops genetically-modified food) and Percy Schmeiser (the stubborn farmer they’re suing for illegal use of their modified gene on his canola crop).

Some horrible audience-participation opens the show, but once such time-wasting is complete, a capable cast plays their parts well (my favourite was Cary Lawrence who plays a plethora of characters on both sides of the issue with standout nuance and comic timing) and Chris Abraham directs the convoluted action to have an easy flow with appropriately dramatic ebbs. But, technical achievement aside, I struggled with finding the magic that so much of the audience (and everyone I’ve talked to who’s seen it) experienced when watching Seeds. Apparently it’s been opening a lot of eyes and changing a lot of minds (though how people haven’t been clued in to the issues of GM foods already is beyond me), but I think the eye-opening and mind-changing could have been a lot more effective had Soutar abandoned the idea of Documentary Theatre.

I know it’s her deal, documentary theatre, but I don’t entirely get the point. Film documentary has the luxury of skipping through time and space easily, and of showing the real people speaking their real words- the effect can be so much more truthful than if a screenwriter had stylized those words and delivered them to more beautiful people to read. But documentary theatre has a Brechtian distance built into it that erases that effect almost entirely. Not only are we aware that these are actors, we are hyper aware that these are actors, because generally they each play multiple parts (often differentiating them by simplifying the characters and adding obvious costume, accent and posture indicators). Because of that distance (further made awkward by the character of the playwright cutting into the scene to explain who’s talking), documentary theatre’s close-to-life foundations feel forced because the dialogue is the only remaining truth, and what are honest words from real people end up sounding like bad scripting.

I’m all for telling real stories, and I’m all for theatre-over-film if you want the spontaneity of live performance and the intimacy of sharing a space with your audience. But the real-life stories I like best on stage are ones where the characters haven’t been plucked right out of the canola field and given a hat, they’ve been given thought and story consideration (even if it breaks with absolute reality) because they deserve the powers of a real storyteller in their corner (see Sorkin’s Farnsworth Invention or Billy Bishop Goes to War by Seeds‘ own Eric Peterson). By its very fundamental constraints, theatre is not a realistic medium, so the fake-by-necessity/real-at-the-expense-of-the-story form that pieces like Seeds and The Laramie Project take just doesn’t make sense to me. Why not craft a story based on true events, and craft it to the best of your ability with words that get to the heart of what people mean to say (not just what comes out of their mouth while the recorder’s on)? Why not abandon the abstract and distancing effect that mimicry of the the film documentary format creates when the real people aren’t appearing as themselves? I just don’t get the idea that the audience wouldn’t take it to heart if the words were more scripted, it feels like the pacing and character storytelling and timeline of the piece needed writing, not assembling.

Seeds is at its best when Peterson (excellently crusty as the accused farmer) argues with Tanja Jacobs’ smart-ass Monsanto lawyer or Lawrence’s slippery PR rep; there are only two actors on stage (in characters that have the luxury of enough stage time to develop a bit), having a well-constructed moment that’s dramatically effective and only incidentally documentarian. Those are the moments when it doesn’t feel like Soutar cares more about teaching us a lesson on “This Is Real, People” terms than telling us the remarkable story she has at her fingertips but is annoyingly hesitant to write.