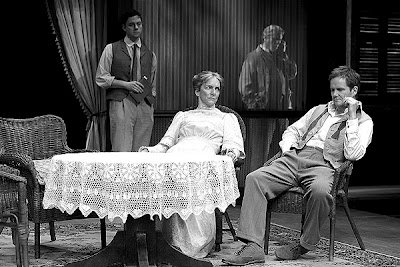 Two days after the premiere of High Life, Soulpepper took its study of addiction back almost 100 years to Eugene O’Neill’s autobiographical masterpiece Long Day’s Journey Into Night. Studying O’Neill’s very long 5-person (4, really, plus a tiny servant role) opus in University, I struggled withthe fact that it was so often dubbed a “masterpiece”, considered the greatest play ever written on this continent. American domestic drama is not usually my bag and all semester long in my Modern Drama english class I couldn’t wrap my head around what made Long Day’s so special.

Then I saw Soulpepper’s production.

I’ll admit I sometimes don’t have the greatest attention span for someone who goes to the theatre as much as I do- I was drifting away somewhere in the middle of High Life‘s 110 minutes- but there wasn’t a single moment of Long Day’s Journey Into Night‘s 3 hour running time that I was anything but captivated.

The cast as a whole has the true complexity of a torturously close family and each and every one of them is brilliant in their respective role*. The superb Nancy Palk is the best I’ve ever seen her as morphine-addicted mother Mary Tyrone; her smothering love of her family overwhelms in the best way then leaves a horrifying gap as she descends into a passive-aggressive, utterly defensive, casually cruel ghost of herself, dreamily floating through act two. The wealth of chemistry that exists between Palk and her off-stage husband Joseph Ziegler is the silver bullet of their on-stage relationship; there is an unshakable love there that gives weight to the Tyrones’ long marriage and layers to their every interaction. For his part, Ziegler’s strength is in all the relationships he builds on stage. Through James Tyrone’s most grandiose and most heartbreaking speeches, he holds his patriarchal ground well, but it’s in the proud or disappointed ways he looks at his sons, the love and loneliness in his gestures towards the dreamily unaware Mary, that’s where Ziegler really succeeds at building a painfully human character.

As for the sons, elder brother Jamie is played with surprising comic timing and haunting, barely hidden (until it’s not) resentment by the always-great Evan Buliung. His act two scenes are some of the best in the script and he delivers with palpable emotional range. The brotherly chemistry between Buliung and Gregory Prest, playing the ailing younger brother Edmund, rings brilliantly true, as do most of the familial notes in the play (Palk and Prest’s desperate and clingy mother-son relationship is another highlight; they’re often intertwined and simultaneously miles apart). Gregory Prest has very quickly become my favourite Soulpepper actor, in large part because of his phenomenal take on the playwright’s proxy character, Edmund. Suffering from consumption, Prest’s Edmund is in shambles yet trying to hold himself together, hopeless yet deceitfully optimistic, self-destructive in his devotion to his family yet disappointed and dissatisfied with where they’ve brought him- the emotional climax of his performance, when he lets go of the rage he’s been wrestling with since the titular long day began (and long before that, really), was, for me, the standout moment of the superb production.

Uninspired set and costume design by Peter Hartwell that side-steps the bookcases O’Neill describes in great detail- detracting from James’ literary obsession- and sticks Buliung in an ill-fittingly dorky period ensemble (everyone else is fine) was the only thing I didn’t like about the production (though ground is certainly made up with Mary’s ghostly white lace, the set remains remarkably boring). For the most part, director Diana Leblanc elicits such stunning performances from her actors that her direction is refreshingly unnoticeable- I was too caught up watching the story she presented to notice the details of her work (the highest of compliments).

There’s a pervading mutual love between these incarnations of the Tyrones just as their shared family traits inspire them to resent each other in equal measure. They spend much of the play trapped in a cycle of blame until Mary drifts so far away all they can do is look at her with utter heartbreak. The complexity of the relationships created by Palk, Ziegler, Buliung and Prest lifts O’Neill’s story to the level of “masterpiece”- they torture each other in ways that only those you love can and the effect is nothing short of extraordinary.

*Palk, Ziegler, Buliung and Prest are all 4 nominated for 2011 My Theatre Awards for their work in The Glass Menagerie, Parfumerie, The Grapes of Wrath and White Biting Dog, respectively. Read the full list of nominations HERE and check out our exclusive interviews with Joseph Ziegler and Gregory Prest.

Long Day’s Journey Into Night plays at the Young Centre for the Performing Arts until March 31.