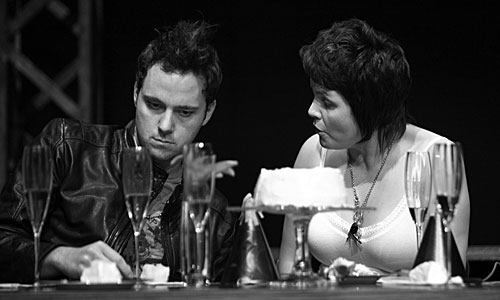 In honour of Soulpepper’s tremendous production of Long Day’s Journey Into Night, which opened last night (review to come), today’s interviews are with two of of the production’s outstanding actors. We already heard from stage vet Joseph Ziegler (James Tyrone), now it’s time for the brilliant young talent that is Gregory Prest (who plays James’ youngest son Edmund), nominated for the My Theatre Award for Best Supporting Actor in a Play (White Biting Dog). He’s funny and charming and talented and if you don’t know who he is you need to buy a ticket to the Young Center RIGHT NOW. Go, do it now, we’ll wait for you…. okay, now you can read the interview:

Do you remember your first experience with theatre?
There is a touring company in Nova Scotia called Mermaid Theatre.  They’re a great, magical, imaginative young people’s puppet theatre.  I remember seeing a production of Peter and the Wolf where the wolf was a sort of metal robot – half bob sled, half heating duct.  I thought it was pretty awesome.

You’ve played so many great parts, do you have a favourite?
When I was part of the academy we did a production of The Cherry Orchard directed by Daniel Brooks.  We worked on it for months over the course of two years and performed it in the Tank House as part of Soulpepper’s Lab Series.  I think four people came and one of them might have enjoyed it.  I loved it.  I played Trofimov the eternal student.  It’s a great part.  I’d do that again in a heartbeat.  I also learned so much during that time of my life – perhaps it’s all mixed in to that experience.  It’s difficult for me to separate the part from the company and experience of the production.  Oswald in Ghosts, Octavius Caesar in Antony and Cleopatra, the weird assortment of nut jobs in Window on Toronto.

Is there one you haven’t tackled yet that you want to try your hand at?
Before I get too long in the tooth I want to play Konstantin in The Seagull.  Mitch in Streetcar, Angels in America, Hamlet.   I want to do a Joe Orton play.  I have an endless list.

How did you first get involved with Soulpepper?
I was part of their 2009-2011 Academy.

Who’ve been some of your favourite people to work with at the company?
Soulpepper has some of the greatest people I know bumping around the halls.  I’ve worked with some of the greatest actors, directors, teachers, designers, stage managers, tailors, technicians, and dressers.  The artistic and administrative staff are incredibly supportive and engaged.  Besides the acting company, it’s the crew in the offices that run the place that make the day-to-day experience of working there so wonderful.  I love popping upstairs and making a nuisance of myself, poking my head in offices and having a chat and a laugh.  That said, I shouldn’t mind working with Nancy Palk till death do us part.  Was that weird to say? Probably.

Your My Theatre nomination this year is for White Biting Dog. That’s a tricky play; was there a lot of “oh god, what does this mean?” happening in rehearsals?
Tricky?  What are you talking about? It’s INSANE!  For me, Judith Thompson taps into something uncomfortably non-intellectual.  I think the logic of her characters in this play are entirely muddled and directed by their emotional needs.  It always wasn’t helpful to have a debate on what things mean in the rehearsal hall.

Tell me about Pascal. He’s got so many personas and walls up, how did you get at the heart of the character?
I hope Nancy won’t mind me retelling this story.  Apparently when she was pitching the play to Albert, he said, “Casting wise, for Pascal we need someone dark and sexy, someone who oozes sensuality, incredibly built, cool, someone who would just drive you wild with desire.” Nancy replied, “No we don’t.  We need Gregory Prest.”  This makes me laugh.  It also makes me want to go to the gym.

Pascal for me is essentially two characters: Gordon from Oakville and then Pascal the everything else.  I think what Nancy meant was that Gordon from Oakville is the heart of him – the guy  – his true self.  That’s where I started.  That’s where his heart is – the guy who just wants to go home.  The personas and walls are years of trying to figure shit out and be comfortable and wanted and to just get through the day

Be honest, was there a little Keanu in the deadpan cool-guy routine Pascal was putting on in the beginning?
That is very funny. I hadn’t thought of that at the time but a few people have asked me that.  It wasn’t on my radar at all.  I had a very specific friend/colleague in mind.  Judith has a note that Pascal spends a great deal of time thinking about experience.  I love this.  Also he has to whisper throughout the first act.  Perhaps the combination of those three things combined with a terribly awkward situation and Christina Poddubiuk’s great costume design are perfect ingredients for a Keanu impression.

Did you get a chance to see any other productions at Soulpepper this year? Did you have a favourite?
I don’t go to the theatre.  I don’t like it.  I’m joking.  I loved their beautiful production of Glass Menagerie.

This season you’re in a ton of big ticket shows. What are you most excited about?
All of them.  Happy to be doing the comedy You Can’t Take it With You after spending eight months in dark Thompson-Ibsen-O’Neill world.  Intrigued by The Royal Comedians.  Thrilled to be doing Salesman again.  Throw in The Crucible – come on!  I’m a lucky guy.

You’re doing Long Day’s Journey Into Night now. How’s the Tyrone family treating you so far?
This is an incredible play.  It’s brutal and beautiful and heavy.  It’s an amazing group of people I get to work with.  But it’s dark.  I couldn’t be happier.

You played Hamlet in the Kill Shakespeare reading at the Word Festival. How much fun was that?
I know!  That was great fun.  It was great being in the room with Anthony Del Col and Conor McCreery.  They’re great guys.  I got to play “Fake Hamlet”!  Apparently it was Rick Roberts’ third “Fake Richard III”.

If you could pick one, what would you say has been the defining moment of your career so far?
That’s tough.  I think one of the most valuable moments (in hindsight of course) was my first big real disappointment.  I did my undergrad at Acadia University in Wolfville, Nova Scotia.  Half way through, I was about 20, I decided to audition for the musical theatre program at Sheridan College.  That’s want I wanted to do.  I prepared, arranged travel plans (they were auditioning in Oakville), studied music theory like hell, said goodbye to my Acadia friends and classmates, saved money and flew (for the first time in my life) to Toronto.  I spent the day auditioning.  It never occurred to me that I wouldn’t get in because that’s what I wanted to do.  Naïve.  It made sense to me.  It wasn’t that I was super confident or cocky, I just wanted it.  I was told right there in the audition room that they weren’t going to take me because I wasn’t what they called “marketable” and that they only took students they were confident would and could actually work after they graduated.  I was in shock.  Crushed.  I recall a very pathetic phone call home from a payphone in the hallway.  That didn’t work out, what am I going to do now? That huge heartbreak and disappointment was probably one of the best things to happen to me because it made me have to become friends with “that didn’t work out, what am I going to do now?”  It’s useful to become friends with it.  Or at least flirt with it.

Is there anything you’d like to add?
Thanks for asking me to do this.