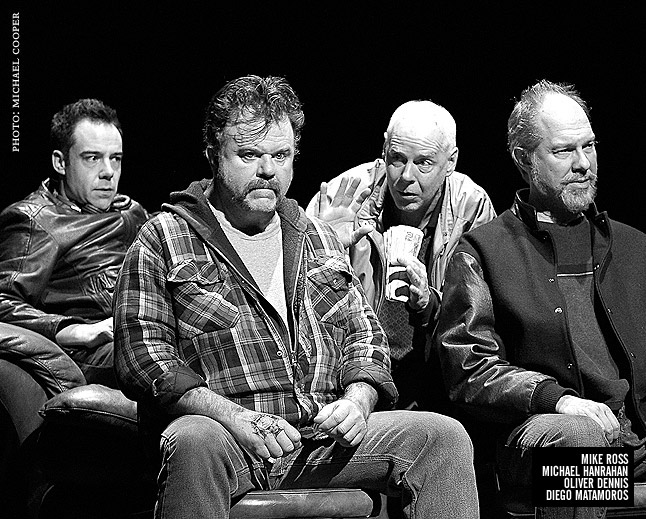 Last week was the premieres of two new shows from Toronto’s Soulpepper Theatre Company. One’s a Canadian 110 minute black comedy written in 1997, the other a 3 hour American drama from 1956 that’s largely considered the greatest North American play ever written. But they’re both, in some way, about morphine addiction– throughlines! First up was the aforementioned comedy, Lee MacDougall’s High Life, which premiered on Tuesday to a packed house, great applause and a dramatic medical interruption when an audience member passed out. To be honest, I was surprised more people didn’t keel over as the already not-too-comfy Baillie Theatre was crowded, hot, stuffy and filled with the fumes from the on-stage cigarettes- the effect was unpleasant but oddly perfect for the story about addicts struggling to escape their cramped and suffocating circumstances.

The premise of MacDougall’s play is part pitiable tragedy and part high-concept farce. The top-notch cast play four diverse guys who share a grittily realised needle-based addiction to prescription morphine and who embark on a plan to rob a bank to score more drug money. As a group, they’re a sorry sight- 3 of them have done jail time, 1 doesn’t have a single organ working correctly, 2 are rotting away as grotesque, violent loners and the other is just getting started down the depressing road that leads to the other guys’ existence- but they can’t stop themselves. That futile fight against their instincts (and knowledge- Donnie, the one with the failing organs, knows the drug will kill him) lies underneath the action of the play, darkening the story that is mostly filled with laugh-out-loud hijinks. High Life is one of those provocative plays that’s fundamentally sad but distractingly funny, and that balance is hit beautifully by the all-star Soulpepper cast.

The chameleonic Diego Matamoros (last seen dorkily vacuuming up chip crumbs in The Odd Couple) plays Dick, the ringleader who assembles the cons and the mastermind behind their harebrained plan. Matamoros sits in the role with the ease of an old pro, embodying the defiantly decrepit leader with the sort of backward hopefulness that makes his performance as heartbreaking as it is hilarious. My Theatre favourite Oliver Dennis superbly seems like he’s falling apart at the seams as the dying Donnie, perfectly capturing the feel of his ailments as well as Donnie’s commitment to whatever moral high ground he can grasp within the confines of his lifestyle of addiction and petty thievery (he swipes ATM cards from purses, but always makes sure to return them so the owners don’t worry). Michael Hanrahan is the threateningly tough Bug in the production’s broadest but appropriately defensive performance. Mike Ross plays the age-and-health outlier Billy with the great energy we’ve come to expect from the multi-talent, but he’s far better playing the comedy (like his charming mid-caper monologue to an unsuspecting bank teller) than the cool (his reckless attempts to stand up to Bug). There’s a restlessness to Dennis, Hanrahan and Ross’ performances that adds brilliantly to the ticking time bomb of the story and the tense fallibility of Dick’s plan.

Lorenzo Savoini’s convertible set design easily transforms the space (including accommodating an excellent drawn-out sequence wherein almost all the action takes place in one small car) though director Stuart Hughes’s pacing could be tighter. The quick scenes and time jumps in the first half don’t help him out on that front, but by the time the characters set their plan in motion (in hilarious real-time), the production is rollicking along. Paul Humphrey’s sound and Steven Hawkins’ lighting are simple for the most part then startling during the occasional morphine high- a very cool effect.

Bolstered by its excellent cast, High Life is at once a hugely enjoyable comedy and the blackest of modern stories, a thought-provoking piece that will have you questioning just what it was you were laughing at hours after you leave the theatre.

High Life plays at the Young Centre for the Performing Arts until March 28th.