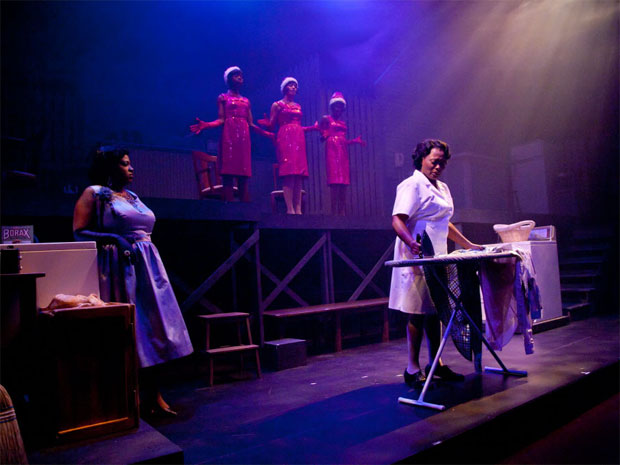 I’ve heard nothing but glorious praise for Acting Up Stage/Obsidian Theatre’s recent production of Caroline, or Change at the Berkeley Street Theatre. After Acting Up Stage’s glorious production of Parade last winter and their exceptional Joni Mitchell/Leonard Cohen concert in the spring, and knowing as I do what a phenomenal talent leading lady Arlene Duncan is, I was more than excited to see the Tony Kushner-penned contemporary musical about a maid in 1960s Louisiana (with music by Jeanine Tesori). But after seeing it, I haven’t the slightest idea what everybody’s on about.

The voices are sensational, that is the inarguable truth- led by Duncan’s powerful and soulful belt, the calibre of the cast simply couldn’t be improved upon. The set is functional and impressive, the pacing good, the costumes acute, and everything about the production itself is on par with the type of work the companies involved usually produce (meaning: highest professional quality). I liked Deborah Hay’s scrambling stepmother and her awkward attempts to not say the wrong thing; I liked Alana Hibbert’s optimistic, forward-thinking maid Dotty; I liked the charismatic Sabryn Rock as Caroline’s irrepressible daughter Emmie, and I liked how painfully adorable her two little brothers were. But those were three performances made outstanding by the actors, in the script’s best roles by miles. As for everyone else, there was simply no way out from under the crappy source material they were working with.

Yes, “crappy”, I’m going with “crappy”. Anything less than “crappy” and this production would have been sensational- that’s how well executed it was. But there is literally nothing on earth that can save bad writing- not powerhouse talent, not sizzling chemistry, not audience guilt or intermission liquor, not clever direction, generous budgeting or even standout music director Reza Jacobs. Nothing. And Kushner and Tesori’s product is crappy. If you’re going to anthropomorphize the household appliances, you’d damn well better have a point to make, otherwise why am I listening to a washing machine when I could be spending my time hearing the musical thoughts of a complex human character? Also, for the record, everyone knows the moon is a baritone, not a soprano (shoutout to Moulin Rouge, to lighten the mood?). The plot itself is sickeningly punny (Caroline gets to keep any loose change she finds in the laundry, as the family goes through some major changes and deals with a country on the cusp of great change, etc… kill me now) and filled with obnoxious retreadings of truths that have been told far more effectively countless times in modern art history.

This seems to be a pattern forming in the Toronto musical theatre scene (just wait til you read my upcoming Tommy review…) and it’s just not okay (especially not from Acting Up Stage, the one company dedicated to exploring the depths of the oft-maligned genre). I don’t care how much style you’ve got, the responsibility of the artist is first and foremost to their story, something that’s been slipping through the cracks more and more.