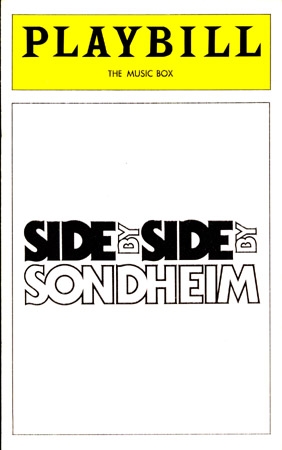 Sonus Stage Company’s Sondheim revue Side by Side just opened at the Walmer Center Theatre. Earlier this week I had the opportunity to enjoy excerpts from Acting Up Stage’s Both Sides Now, a revue of Leonard Cohen and Joni Mitchell songs. Sonus’ production, a less polished restaging of a pre-existing cabaret has none of the jaw-dropping talent and music direction innovation of Both Sides Now, though they begin with more iconic musical theatre material.

The 1975 revue hasn’t been updated since its original staging and therefore lacks many of Sondheim’s most famous and more current melodies and while the company does an excellent job making the niche composer accessible to non-fans, an update would have really helped their cause.

Acting Up Stage, conversely, was all about innovation in their interpretation of the iconic folk and rock songs. With a perfect cast featuring stunning turns from Marcus Nance, Arlene Duncan and Bruce Dow, the highlight was an all-female quartet on Mitchell’s famous “Big Yellow Taxi” featuring the superb Sara Farb (who also had a brilliant solo on “Chelsea Morning”), Kelly Holiff, Amanda LeBlanc and Eden Richmond. Mike Ross’ piano-pounding jazz rendition of Cohen’s “Famous Blue Raincoat” was also a sheer delight. But the real star of the show was music director Reza Jacobs whose inventive and beautiful interpretations of well-known songs into musical theatre character numbers was a real star turn.

Ultimately, the capable singers Tammy Everett and John McNeill can’t keep up with the Both Sides Now singers and though Mikaela MacGillivray most definitely has a developing star factor, the stars are already shining at Acting Up Stage.

Side by Side plays at the Walmer Center Theatre in Toronto, ON until October 23rd.