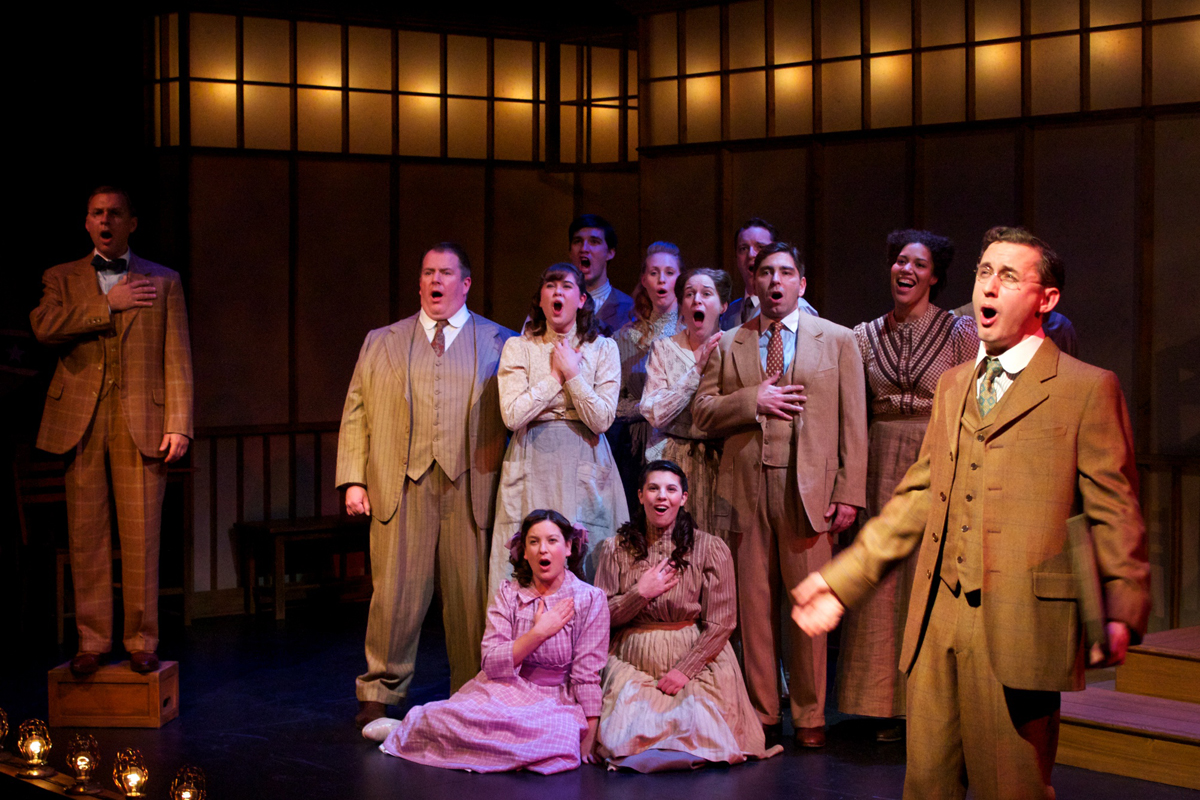 Acting Up Stage Company and Studio 180 have brought something really special to Toronto this month. In the Canadian premiere of the Tony-winning musical Parade, a pared-down company of just 15 takes on the most sprawling story ever told by Jason Robert Brown, one of musical theatre’s most complex and daunting composers. Whatever the Globe and Mail may say, Parade is a superb musical filled with compelling characters, wonderful music and an affecting story done justice by the complex book and lyrics. Brown’s wonderful a-melodic sensibility suits Leo Frank’s isolation perfectly and heartbreaking lyrics like “when she laughed you swore you’d never cry again” lend sympathy to the Southern soon-to-be antagonists. In its original multi-Tony-winning form and this revised chamber version, Parade is a musical with a beating heart and something to say, as all the best ones are.

The story of Leo Frank’s prejudice-fueled trial and ultimate lynching for the murder of 13-year-old Mary Phagan is disturbing and fascinating. In the context of post-civil war Georgia, Jewish intellectual Leo is a hated symbol of the South’s perceived oppression. The Southerners, in turn, represent backwards thinking and ignorance to Leo. He’s a snob, an uptight, unforgiving Yankee even less comfortable in his own skin than he is in Georgia. His dismal and undeserved fate does have everything to do with his religion, with his geographical background and with his education, but it also has everything to do with his attitude, with his nervous twitching, with his mistrustful gaze, with his unlikable nature. The people of Georgia were looking for someone to take the blame, somewhere to place their hate, and Leo Frank fit the bill because he didn’t belong, never wanted to. They didn’t like him, and there are few things in the world easier than assuming the villainy of someone you didn’t like in the first place. It’s a horrifying true story with giant social themes of antisemitism and hate, and a terrifying human story of unpopularity, assumption and influence.

Canadian icon Michael Therriault plays Leo without vanity or caution. He allows the character every antagonistically unappealing trait he has and trusts the audience to still recognize the evils perpetrated against him. Therriault, taking over the role originated by fellow Canadian Brent Carver, brings to life a wonderfully awkward Leo; he’s someone who can’t sit still, can’t speak with ease, can’t breathe freely. In the comfort of his wife’s arms and the triumph of the very few uplifting moments he enjoys, Therriault’s Leo relaxes into a man deserving of the love his wife Lucille has shown him since Act 1. We see it only in glimpses, as a townsperson unburdened by hate might have, but Leo Frank is a good man, if not necessarily a nice one. Vocally, Therriault isn’t as strong as Carver was, nor does he quite keep up with the astounding voices in the ensemble, but the complexity of his acting renders the vocals less important.

Leo’s wife Lucille, a woman of tremendous heart and courage, is played with remarkable dexterity by Tracy Michailidis. With a beautiful vocal performance, an empathetic demeanor, wonderful pluck and her head held high, Michailidis’ Lucille brings Leo the pathos he might not earn on his own.

The highlight of the production, however, is Daren A Herbert in a dual role as Newt Lee and Jim Conley. From the moment his rumbling baritone snakes its way around Newt’s fraught account of finding the dead body in “I Am Trying to Remember” to the impressive wail of Jim’s unsettling blues number “Feel the Rain Fall”, Herbert captivates and enthralls with a voice like thunder and a perfectly-developed sense of character. His two parts are as distinct as night and day, though neither is simplified. His Newt is nervous, trampled and overwhelmed, seeming to be, for the most part, most comfortable in the background (that is until he speaks his piece, soliloquy-like in “A Rumblin’ and a Rollin’,”). Jim, on the other hand, is played with verve and, well, balls. He’s a gutsy, crass and captivating personality whose seduction of the courtroom is much to blame for Leo’s fate. When Leo sings the other characters barely listen, when Jim sings they join in, backing him up. Herbert expertly draws the world of the play in around him until, knowing we shouldn’t be swayed, we are.

The rest of the ensemble is truly excellent as well. Mark Uhre, in particular, stands out, bringing a superb singing voice and immense commitment to his many roles (most terrifyingly, powerful bigot Tom Watson). The trio of Mary’s friends, played by Sarite Harris, Paige Robson-Cramer and Jordy Rolfe, make the horror of “Factory Girls” and the tragedy of “It Don’t Make Sense” absolutely haunting while the rage they display in choral numbers like “Hammer of Justice” is breathtaking. As Minnie, the Franks’ housekeeper, Alana Hibbert is great too, adding a lot to the excellent duet “A Rumblin’ and a Rollin’.”

Jeff Irving also steps up as a noteworthy, his beautiful and strong baritone lends weight to the show’s opening anthem “The Old Red Hills of Home”and his detailed acting really shines as a surly guard and the impassioned young Frankie Epps.

The weak points are the Phagans. Mother Gabrielle Jones sports the least impressive vocal performance of the lot with a metronomic “My Child Will Forgive Me” and Jessica Greenberg’s forced childishness in the role of Mary is tiresome. That said, both contribute well to the ensemble pieces and the cast in general is one of the strongest overall I’ve seen in quite some time.

Director Joel Greenberg makes good use of the Upstairs Berkeley St. Theatre’s intimate space and musical director Michael Gianfranesco manages Brown’s difficult score more adeptly (if rather stiffly) than is usually expected from anyone other than the actual Brown.

The Acting Up Stage/Studio 180 joint production of Parade is a true testament to the power of musical theatre. It’s beautiful, it’s powerful and it hosts a cast of performers of unparalleled excellence. Would that there were even more companies dedicated to bringing such insightful works to the Toronto theatre scene.

Parade is playing at the Upstairs Berkeley St. Theatre until January 22.