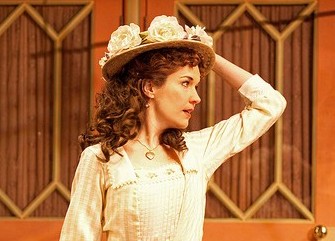 One of the most dynamic actresses in Canadian theatre, Laura Condlln has been making headlines for CanStage this off-season as the heartbreaking lead in 4.48 Psychosis. In her years at Stratford, she delivered lots of chronically underrated performances, earning a 2011 My Theatre Award nomination as Best Actress in The Merry Wives of Windsor before her standout 2012 season in both The Matchmaker and Elektra.

Laura participated in our Nominee Interview Series last year but when she was received yet another nomination- this time as Best Supporting Actress for The Matchmaker– she signed on to answer even more of our questions, because she’s just that awesome.

How does one go about stealing a show (The Matchmaker) from vets like Tom McCamus and Seana McKenna?
[Laughs]. Are you kidding?!?! No one could Ever steal a show from those Masters. But even though it was really their show, their wisdom and generosity contributed to the creation of a fantastic ensemble.

You and Mike Shara were splendid together. What was the secret to your fun chemistry?
We hate each other. Just kidding. [Laughs].

Mike is fantastic. As an actor, and as a human. He keeps things light and fun – he can be a wonderful clown, and in that way reminds me not to take myself too seriously. He also has a great deal of integrity, and a love of telling stories. It was easy to adore him, and I love playing opposite him.

[Editor’s Note: to hear the love reciprocated, check out our interview with Mike]

The Matchmaker was director Chris Abraham’s first foray onto the Stratford mainstage. What was it like working with him?
Chris is brilliant. He does an astonishing amount of prep work, is articulate, specific, passionate, collaborative, fun and funny. And he has an enormous brain. I trusted him implicitly – and he just knew how to solve EVERYTHING. He is a fearless leader, who never stops wanting to make things better. He offers a continual flow of notes and specific thoughts. I love that. As an actor It gives me a lot to work towards – keeps me active and thinking and working all the way through the run.

Did you have a favourite moment in that production?
Oh, that’s hard. Just one favourite moment? So much of it was joyful each time. But the faves would be: Listening to Tom’s funny vocal idiosyncrasies as Vandergelder over the speakers backstage, while getting ready in my dressing room; giggling with Seana centre stage in the hat shop – no acting required; the whole of Act two- the hat shop section;  dancing with Brian Tree as the waiter in the restaurant; dancing with Andrea [Runge] (Minnie) in the ‘rain’ in the transition between acts three and four; singing ‘east side, west side’ with the audience at the end of the show.

Tell me about Elektra. Is the process any different when you’re tackling a Greek vs. a more modern text?
Ann Carson’s translation of Elektra was so accessible it made it seem extremely modern. Of course it was still heightened language, and there was a structure and a form to it, and certain things were harder to roll off the tongue, but ultimately I felt it was very contemporary. The language contained vivid imagery and a powerful energy that made it a gift for an actor – by that I mean it was language written to be spoken.

I had never done a professional production of a Greek play, and I found it to be a very unique and special process. We worked very closely as an ensemble with our director Thomas Moschopoulos, and his choreographer Amalia Bennett and composer Kornilios Selamsis, all from Greece. They challenged, enlightened and inspired us. It was very fulfilling.

How’s Yanna McIntosh as a sister?
Chrysothemis might say she has issues with holding a grudge…..
But Laura says you couldn’t ask for a more powerful and inspiring acting partner – or Sparring partner. We didn’t really have to think about being sisters, we just were. I loved being out there with her. It was so charged, so alive.

Your character Chrysothemis (Elektra’s cautious sister) felt distinctly modern. What were some of your inspirations?
The wig really helped. Very Kardashian…..But, again, I can only credit the text.

Did you see anything else from the Stratford 2012 season? What were some of your favourites?
I see everything in the season- more than once if I can. I love seeing what everyone else is up to.

I was a non-appearing understudy in Cymbeline, so I saw it at least twenty times, and it was stunning each and every time. I was so moved by Wanderlust.  And I Loved Hirsch; it deepened my understanding of one of the Festival’s greatest leaders.

What are you working on now/what’s next?
I just finished a run of Sarah Kane’s 4.48 Psychosis with Necessary Angel Theatre in Toronto, and am currently [performing] THIS at Canadian Stage.

[Editor’s Note: THIS plays until April 13th at the Berkeley Street Theatre. Click Here for tickets.]

Do you have anything you’d like to add?
I’m honoured to be on the nomination list again.
And I just want to thank you for your amazing website, and your passion for the theatre.