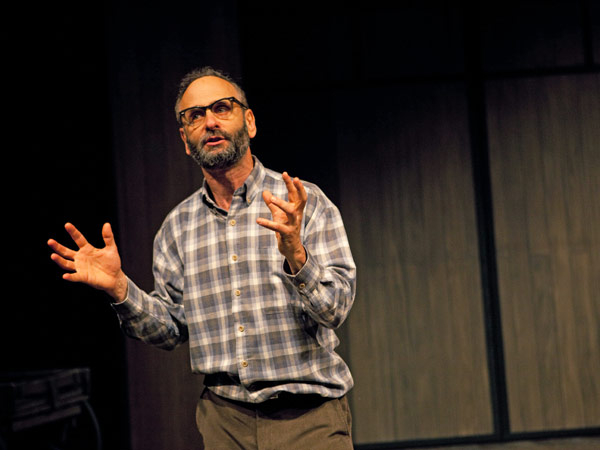 Hirsch is the studio production thrown into the Stratford 2012 season at the last minute. It doesn’t really belong in a tangible way, but it’s about an eccentric former Artistic Director, so why not? Alon Nashman is great as John Hirsch- an inarguably fascinating figure in Canadian theatre and the world at large- and I like his general thesis of “it’s not acceptable that you might be forgotten”. But I’m still not sure Hirsch is an important enough piece of theatre to stand on the stage its namesake helped build.

Most of the play’s best bits are when its hero spouts (or, more often, shouts) Shakespearean interpretation. I love that kind of stuff, though I’ll be the first to admit that it’s not exactly accesible to people who don’t know The Tempest inside and out (for the record, it’s true- Prospero Is the monster; Caliban is a lover. Smart man, that Hirsch!). The effect of those moments, while decently presented in the wholly competent production, was me wanting to read a Hirsch memoir ala Richard Monette’s This Rough Magic, if only to hear evidence of the man’s genius first hand rather than through commemorative bio-theatre. I’m sure, were he still around, I would be enthralled sitting in the back of a theatre watching John Hirsch run a rehearsal. But unless it’s written by a like-minded genius, scripted representation is never quite as enthralling.

The other thing I particularly loved was the use of stage hands. They walk on, fully visible in their backstage blacks and headsets, to help change the set and move props. It’s a clever meta device that nods to Hirsch being, above all else, a theatrical storyteller.

If you’re fascinated by festival history or Canadian theatre history in general- go see Hirsch before it closes. If you are a one man show afficionado- go see it. If you’ve seen everything else at the festival, have the money to spare, and are looking for a small but effective character portrait to fill an hour of your time- go see it. If you’re the average Stratford patron who’s saved up for one weekend in town where you’re looking for maybe 3 great shows you could only ever see at this one special festival- I wouldn’t recommend this one. Hirsch is the sort of thing one might venture to Passe Muraille and happily pay $30 to see. But in Stratford, where about 10 dollars more will take you to the Festival Theatre to see Henry V, Hirsch is only really there for people who know who John Hirsch is going in (or are Really interested in finding out). I love a good tale of difficult genius and triumph in the face of historical atrocity and personal obstacles. And what Alon Nashman delivers is an excellent execution of a tiny play about those big themes. But it is tiny- without the grandness of Christopher Plummer’s one man show or the literary intricacy of Daniel MacIvor’s studio theatre one act– too tiny for the Stratford audience who came looking for the sort of grand artistic moments that John Hirsch used to stage himself.