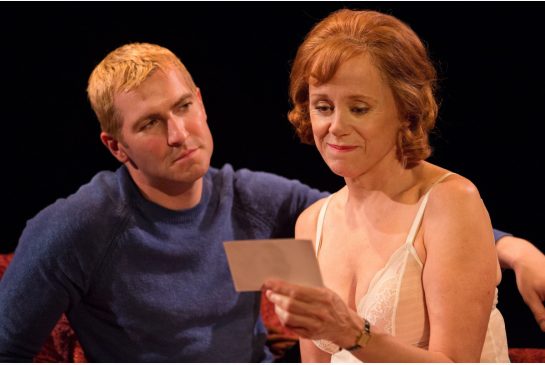 Joe Orton’s black comedy Entertaining Mr. Sloane is a strange but compelling piece of theatre. It slyly speaks (in a strong cockney accent) to the fragility of our moral character while presenting us with people who reach very extreme conclusions. There’s an absurdist bent to the dark realities within these flawed human beings but the spectrum of their faults ensures that the audience can’t help but relate whether it be through Sloane’s need to be loved, Kath’s need to be needed, or Ed’s need to be impressive.

All the desires and failures of the characters swirl around the arrival of the enigmatic Mr. Sloane, an attractive, dangerous, charming drifter whose power for manipulation is matched only by his desperate need to feed on the adoration of others. In the titular role, newcomer David Beazely strikes the perfect balance of foreboding sketchiness and engrossing charm. At a Q&A after the show the mild-mannered Saskatchewan native is a shock to see after embodying such an opposite character so fully for 2 hours and 40 minutes. Fiona Reid is stellar as the smothering mouse who can’t decide whether she wants to be a mother or a lover to the stranger boarding in her extra room. Soulpepper cowboy Stuart Hughes also makes a firm and successful departure from his usual role in taking on Ed, a bourgeois, closeted man with none of the masculine swagger that is Hughes’ bread and butter. He replaces said swagger seamlessly with know-it-all posturing and moralistic nerves.

Director Brendan Healy- Artistic Director of the artistic boundary-pushing Buddies in Bad Times Theatre- takes a restrained approach to the domestic drama, choosing small moments of directorial insight over showy adaptation. His best contributions are a reversal of the set between acts one and two that literally shows the audience the action from the opposite perspective (a hint at what we should be striving to do with the characters and their individual points of view) and the fabulous stage setup (with designer Yannik Larivee) that puts audience on all four sides of a square all-red stage with dense curtains that rise and fall with immense drama.

Entertaining Mr. Sloane was never going to be the star of Soulpepper’s ambitious and flashy 2013 season (that was always going to be Angels in America) but it most certainly is a strong supporting player.