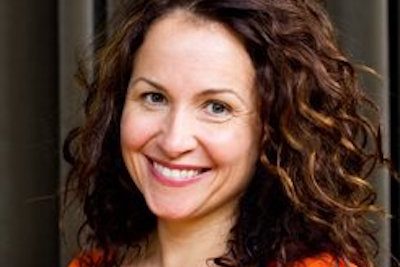 Soulpepper Resident Artist Raquel Duffy is one of the most consistently wonderful performers in Toronto theatre. In a season where she took on three different physical comedy roles, the heart and humanity she brought to the creative clowning in The Anger in Ernest & Ernestine was second to none, earning her an Outstanding Actress nomination to pair with her 2012 win for Best New Work.

Do you remember your first experience with theatre?
I grew up on the East Coast at a time when there wasn’t a whole lot of theatre accessible to me.  I recall seeing Daniel McIvor’s Wild Abandon.  I was absolutely immersed in the experience. So much that when the actor asked the audience if we knew what he meant, I responded, “yes”.  He looked at me, the audience started to laugh, and I was deeply embarrassed.  He obviously wasn’t expecting a response and I hadn’t been aware that I had, I was so taken with the story.  I was hooked after that.

How did your experience in the Soulpepper Academy shape who you would become as an artist?
I was an actor working at a number of different theatres, coming in to do a show or two a season or a summer rep company.  These experiences were wonderful but I didn’t think of myself as an artist until after becoming a part of the Academy.  The experience helped me find a voice (something I’m still working on).  By that I mean what stories I was interested in sharing and constantly asking questions about the ‘how’ and ‘why’.  This is one example of how that experience changed my outlook on what I attempt to do.

You’re a Resident Artist with the company. In your opinion, what makes Soulpepper different from other theatres?
This company is constantly changing and evolving. I think that’s really important in theatre or any art form for that matter. The company cultivates a strong desire to meet the needs of the resident creators, the Academy, and the audience.

You won a MyTheatre Award back in 2012 for creating Alligator Pie. How did you feel about handing the piece over to a second generation cast?
That was great fun! And we got the cast we wanted to take over for us. They are so amazing!

The five of us had a magical time creating that piece.  It’s one of the career highlights for me. It was a time and place that cannot be replicated, unfortunately.  So much has happened to us all both personally and professionally. I don’t know if we could ever match that experience, although it’d be fun to try.  We had the luxury of time and freedom. That’s unusual. And together, we turned into goofy, subversive, annoying nerds. Maybe we’ve finally grown up a bit…or maybe not?

You played the angel in one of the company’s biggest hits Angels in America. What stands out in your memory about that experience?
This was so much more than a show and I think I can speak for all of us involved when I say this.  No one is the exception here.  Every single person involved in that experience feels like family to me, for too many reasons to count. I made lifelong connections through those shows.  Having said that, I was playing a multitude of roles under the umbrella of the Angel character.  The nature of this journey left me feeling on the outside, or periphery of what the other characters were experiencing.  At night, in bed, it left me with an empty feeling.  But I think that is part of what you carry with some roles you play. You can’t always feel fulfilled from every role. Yet I wouldn’t change it for the world.

You’re nominated this year for your performance in The Anger in Ernest & Ernestine, working alongside your frequent collaborator Gregory Prest. Tell us a little about that production and the tricky mix of broad humour and a very complex relationship.
I felt in such good hands with Leah Cherniak.  If there was ever a question about the tone or intentions of a moment, I could find out right then and there!  And Leah was also fantastic about giving us room to make our own discoveries.  She and Martha Ross know each other so well and have such a long collaboration history, so after making a few choices, I would often ask WWMD (what would Martha do?).  Ernestine is hers, and of course I wanted to make it my own but I had a strong desire to get as close to how she was birthed as I could.

Also, I couldn’t imagine doing this piece with anyone other than my pal Gregory. We know each other very well, and that comfort means we can fall flat on our faces, fail miserably, and know the other will help pick things up.  We felt comfortable fighting as much as we did falling in love.

Lastly, I’ll tell you a story about what it was like to perform this show for a Soulpepper audience.  This show was a bit of a departure from what might have been offered to audiences in past seasons.  The first act is more of a clown style, broader humor, the second act gets darker in a very unexpected way.  This makes the journey complex and ultimately more fun to perform.

Is it challenging to work with the creator of the play in the room as your director?
I was intimidated for about five minutes. But Leah is so amazing.  She taught us clown through the academy and directed both Gregory and myself in The Barber of Seville, so there was some history there. It’s a rare gift to be able to get inside the mind and insight of the creator of a Canadian Classic.

Did you have a favourite moment in the production?
Probably the scene where Ernest and Ernestine are performing their morning routines.  I did a shoe lazzi/dance that almost killed me, but I loved it.

What were you hoping audiences would take away from The Anger in Ernest & Ernestine?
Maybe a chance to reflect on their own relationships… how people change over time, and how much work is required from a couple to make a go of it.

Gregory then directed you in The Heidi Chronicles. Is it difficult to navigate the constantly changing contexts of who you’re working with at Soulpepper- one moment a scene partner, the next your director?
Not at all.  It’s an inspiration see my fellow artists jump into new roles and opportunities.

You worked with a director fresh out of the Academy in The Just (Frank Cox-O’Connell). What was that experience like?
Since we had all come from the academy, there was a short hand, or a similar…methodology, for lack of a better word.  I really enjoyed working with Frank.  It’s a tough piece, and he was so passionate about it.  It was infectious.

You also remounted The Odd Couple this year. What do you enjoy most about returning to that production every few years?
Coming back to any piece after a period of time enriches the work in ways you don’t expect.  I also had a different sister each time, so that kept things fresh and fun. With that role, it’s important to note that Neil Simon called them the Pigeon Sisters, with their first names being a funny homage to The Importance of Being Earmest.  They are a unit more than they are two individuals, dramaturgically speaking.

You also appeared in The 39 Steps and Noises Off last season. Tell us about developing the elaborate physicality of those roles and perfecting the intricate timing.
It meant A LOT of rehearsal to find the balance between the comedic timing of role and the truth of the situation. Then discovering how large that truth can be played depending on the style of the production and the taste of the director.  I was in excellent hands with both shows.  Ravi Jain and Ted Dykstra KNOW comedy! Comedy is hard work, but with an instant pay off (when it works). I won’t lie… the staircase in Noises Off did quite the number on my knees for a few months!

At Christmas time you played Mary in It’s a Wonderful Life. How did you go about making Donna Reid’s iconic role your own?
This is one of my favourite movies.  I was tentative approaching a role so well known and so beautifully done by Donna Reid.  Doing the radio play format took away some of that anxiety.  I knew the movie well, and tried to stay true to Mary who is truly a most patient, kind, loving character.  Playing someone so true of heart turned out to be a joyful experience. She has loved George Bailey her whole life and seems to never take that for granted. I felt happier in my real life during that time. My job was made easier because my George was Gregory Prest.  He’s very easy to fall in love with every night.

How did you feel abut the radio play format? Were you concerned at all about the distance it put between the audience and the story?
It felt fresh to me, so I wasn’t concerned.  That distance helped the audience remove themselves just far enough away from the movie to not be constantly comparing it.

That story felt eerily timely after the election. What were you hoping the audience would take away from the production?
We spoke of that through rehearsals. I hope people will look around at the greater community and realize how much strength we have as a group.  A village can achieve so much more than an individual.  Also George Bailey is a reminder of the wondrous spirit of generosity towards our fellow man.

You’re returning to a number of signature Soulpepper productions in preparation for your tour to New York. What are you most enjoying about revisiting those pieces and how do you think American audiences will receive them?
I’ve been a part of these shows since the beginning so I have a strong sense of being a part of the birthing process, which is exciting when thinking of these shows going to New York.  I look forward to how these creations will be received!

What are you up to now/next?
I’m in Of Human Bondage right now, gearing up for the Spoon River remount in a week, and am spending my days doing this very cool podcast project written by Jason Sherman and directed by Gregory Sinclair.  It’s called The Complete 150, and takes place on Parliament Hill and events that lead up to Canada’s sesquicentennial celebrations.  It’s a blast to record!

Is there anything you’d like to add?
A thank you to you.  Theatre is a hard sell these days, so it’s nice to know there are people like you who care about it.