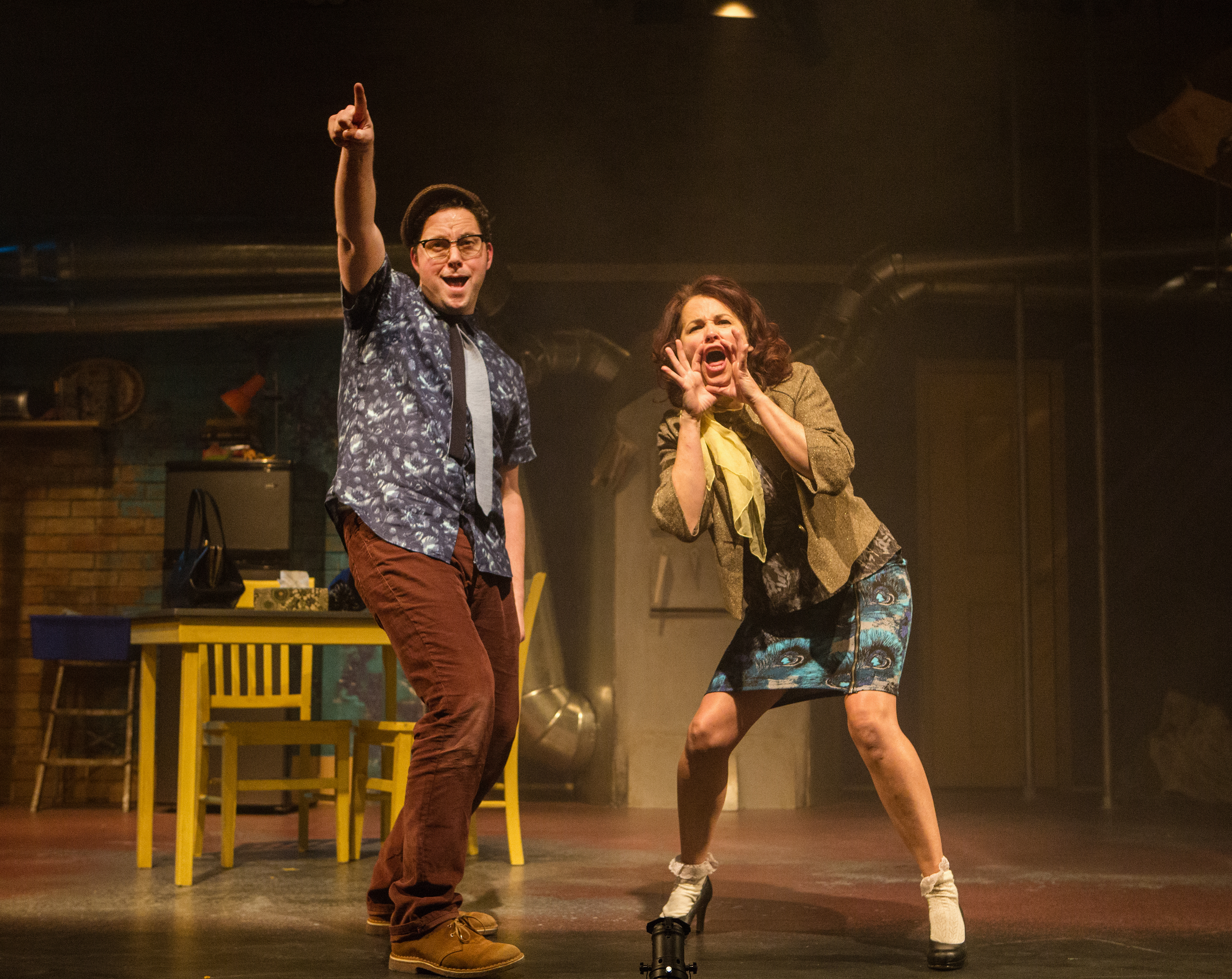 The Anger in Ernest and Ernestine
Raquel Duffy and Gregory Prest stand on opposite corners of the stage. Their eyes meet as a sweet and simple love song plays (an original recording? If not, the dueting voices mirror Duffy and Prest’s hauntingly). They gravitate towards one another and a relationship forms and thrives in a matter of moments. “I love you because you’re always in your own little world” she says; “I love you because you do everything with pizzazz” he replies. The Anger in Ernest and Ernestine tracks the journey from there to “I hate you because I’m stupid and now you know”.

The perfectly cast duo- with their excellent connection and endearing quirks- are so cute you can barely stand it. They’re both very right and very wrong a lot of the time and you root for each of them, even as they tear each other apart. Leah Cherniak, Robert Morgan & Martha Ross’ beautiful script- a delicate mix of almost Seuss-like rhythms and plainspoken truth- is complemented by Shannon Lea Doyle’s design that sets the couple’s seemingly idyllic romance in a basement apartment filled with harsh realities hiding behind bright colours. The physical comedy is occasionally too drawn out, lasting longer than the joke is worth, but the story of how Ernest’s “own little world” and Ernestine’s “pizazz” become the things they resent most about each other is sad and stirring and well-told in one of Soulpepper’s best productions in some time.

Cowboy vs. Samurai
It’s great to see the largely monochromatic company making conscious strides to tell diverse stories and the quartet of performers in this contemporary Cyrano tale set in small town Breakneck, Wyoming (“Asian Population: 2”) all make strong debuts. Michael Golamco’s text itself, however, leaves something to be desired, using the most basic elements of Rostand’s plot without any of the tragedy that gives the story its power. Changing the proverbial nose (ie: the thing Cyrano believes prevents Roxanne from loving him) to an issue of race is an interesting idea but the execution lacks nuance as the themes are overstated and the audience is hit over the head with the point.

Twelve Angry Men
I missed this Soulpepper hit the first time so I was thrilled to catch it on the remount. It’s a classic type of production for a company that thrives on classics- one of American theatre’s most thrilling texts, perfectly performed by a deep bench of stage greats. The elevated traverse stage makes sightlines a little strange (though I like the idea that there are so many perspectives from which to see it), Alan Dilworth’s vague blocking never seems to decide upon a concrete location for the window, and the oppressive heat that’s key to the play’s atmosphere is forgotten all-too quickly, but those are the smallest of execution details in a generally dead-on production.

That said, though I have no objection to Soulpepper remounting a safe, oldschool production to balance and facilitate its more modern, diverse fare, I’m always disappointed to see this script done this way. There are no character names, just juror numbers, in Reginald Rose’s play. There are no ages or character descriptions of any kind; everyone is merely defined by what they say and what they do (imagine such a thing!). There is also an excellent and widely seen film version that sets the story in its original time period. Why, then, does no one ever seem to consider capitalizing on the text’s blank-slate nature to tell a contemporary story? With a few exceptions (namely the characters played, superbly, by Joseph Ziegler and William Webster), the angry men don’t all specifically need to be white; they don’t even really need to be men. There’s nothing in the text anchoring it to its time (especially considering the glacial pace of procedural evolution in the justice system). In fact, the reality that the themes of racial, age and class prejudice ring as true today as ever makes a modern update feel almost crucial. There’s nothing wrong with Soulpepper’s production (well, except the sightlines) and there are many plays I believe should be produced exactly as they were originally intended, I just don’t think Twelve Angry Men is one of them. All I could think about wasn’t the achievement on the stage but all the things that could have been there that were left off the table.