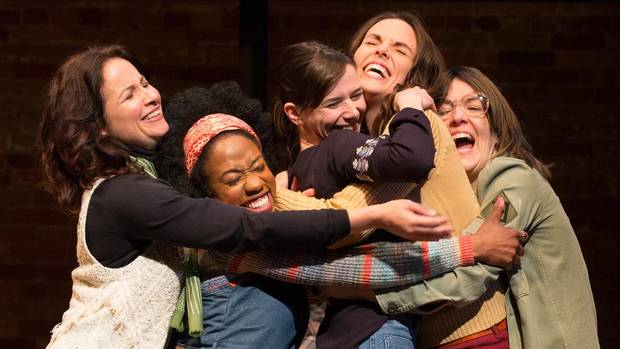 The Testament of Mary
A Nancy Palk solo showcase with beautiful lighting (Lorenzo Savoini) and stirring sound (Richard Feren), this solemn one act tells the Jesus narrative from his mother’s perspective, stretching from his preaching in the temple to his death on the cross. It’s predictably a strong performance from Palk, her Mother of God ferocity eclipsing the more expected tenderness. The segues in Colm Tóibín’s script are somewhat jarring and the ending should come about ten minutes earlier with the play’s most memorable moment but a tour de force for the company’s most celebrated actress is what this was meant to be and it’s most certainly what it is.

The Heidi Chronicles
A sprawling but intimate play about one woman and the people who swirl around her over the course of 30 years, the Heidi Chronicles is a solid, moving, enjoyable piece of theatre full of great performances and simple, story-focused direction (by resident company member Gregory Prest in his mainstage directorial debut). Tasked with playing a full slate of adulthood, the cast is smartly comprised of actors possessing a sort of ageless quality (mature stage presence in the younger, youthful energy in the older). Damien Atkins shines immediately as the precocious 18-year-old version of Peter Patrone then quickly has his thunder stolen by Jordan Pettle as a pretentious and forebodingly charming college-age Scoop Rosenbaum. Both men are whip smart and irresistible, passing the spotlight back and forth with such competitive verve that the leading lady (played with beautifully shifting nuance by Michelle Monteith) finds herself fighting to stay out of their shadow. Surrounded by women either too one-dimensional (the myriad of roles broadly played by Laura Condlln) or too chameleonic (Sarah Wilson’s tragic Susan who shifts identity with the fashion) and men too dominant to engage, Heidi is insightfully, complexly, amusingly, sadly alone in her full, ever-evolving world.

Incident at Vichy
On a hard wooden bench in a nondescript police station in Nazi-occupied France sits a cast of characters- some quite vocal (Gordon Hecht as an accidental leader), some less so (Robert Nasmith as a sick old man), some remarkably poor (Courtney Ch’ng Lancaster as a young boy, Peter Fernandes as a struggling artist), some less so (William Webster as an overconfident business man), all Jewish…. or so we assume given the unthinkable fate that awaits the majority of them. Director Alan Dilworth leaves room on the bench as it begins to clear, his characters showing no interest in shuffling any closer to the interrogation room door, the empty space serving as a growing reminder of those who’ve gone before and how few are left. A stronger sound design would help define the place and add to the off-stage terror but the ensemble beautifully fills out the world of the play with only a single real-time scene. The casting of the eternally sympathetic Oliver Dennis as a Nazi guard adds conflict to the audience’s experience, as does the decidedly less vulnerable Stuart Hughes as the obvious hero. The less obvious hero is the great Diego Matamoros whose understated performance and defining act of goodness make him the highlight of the production. Webster makes a strong impression out of the gate but the strong cast of Soulpepper veterans leaves relatively green Academy grads Hecht and Fernandes behind a bit, revealing a comparative lack of ease with Arthuer Miller’s challengingly naturalistic text. A short 90 minutes, Incident at Vichy is at once a slow-burn tragedy and a quick stab in the heart.