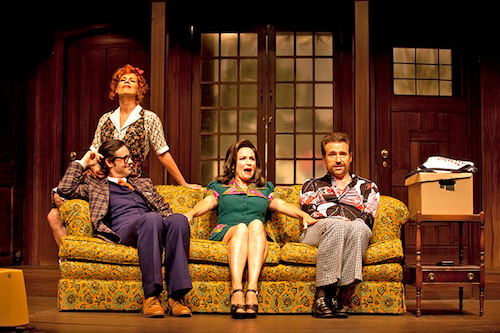 Noises Off
Did we need another 70s-set backstage theatre farce mere months after Jitters? No. But Soulpepper’s production of Noises Off made me laugh louder and with more obnoxious uncontainable shrieks than anything else I’ve seen this year so I’ll welcome the repetition. Simon Fon’s fight and stunt work was still too careful and a little too slow on opening night but, as long as practice breeds speeds as the run progresses, director Ted Dykstra’s production will be running like clockwork. A totally game cast, highlighted by Brenda Robins as an absolutely golden Dotty Otley, takes on Michael Frayn’s hyper-physical farce with delightful joy. The show-within-the-show sections of the first act are a little dry but, without them, the second and third act’s different angles on the same action wouldn’t fly quite so high.

Hosanna
It’s rare that I delight in the season’s people-pleasing farce and am let down by the complex drama it balances in rep but I couldn’t see this Hosanna (or this Hosanna) clearly and, with Michel Tremblay’s layered drama about identity and intimacy, that’s the most important thing. Designer Yannik Larivée and director Gregory Prest choose the not-so-subtle metaphor of a wall of mirrors over staging the play in the round to bring the audience closer into Hosanna and Cuirette’s stiffling space. Though leading man Damien Atkins is devastating in the play’s final moments, his association of Hosanna’s emotional walls with her costume is too literal, cramming far too much of the character’s vulnerability into just the final few stripped-down moments and playing up the character’s performative megalomania without enough glimpses of who all that is hiding. Though Atkins is keen to use his vocal range to reveal the character’s inconsistencies, he makes no effort at even a slight French accent, making the script’s hyper-regional slang feel very out of place. Jason Cadieux’s Cuirette, on the other hand, is a delicately drawn portrait of a man left behind by his time and place and pant size. It’s an exceptional performance within a production that failed to live up to my admittedly high expectations.