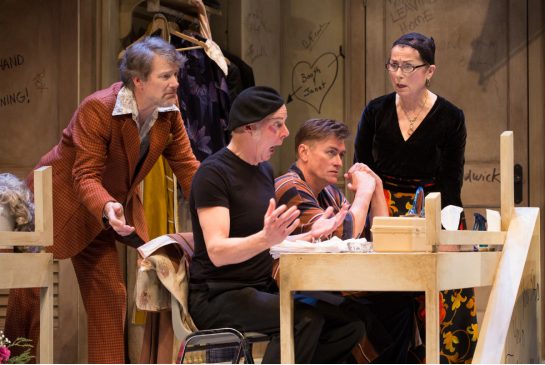 The current rep season at Soulpepper is a perfectly balanced mixture of well-produced pieces. There are no marquee hits in the bunch- no Angels in America, no Of Human Bondage– but the group works as a whole in a way I can’t remember happening in the company’s recent history.

Two of the three plays are directed by Soulpepper Academy alumni (Erin Brandenburg and Frank Cox-O’Connell), the other by founding member Ted Dykstra, and all make insightful use of the company’s reliable stable of actors in completely different ways. The Just features a small cast, including resident artist Brendan Wall in a rare (and excellent) capacity alongside regulars like Raquel Duffy, Diego Matamoros and Gregory Prest in roles that capitalize on their proven strengths (Prest in particular gets a beautiful showcase for his emotional range as a idealist caught up with political radicals in 1905 Moscow). Blood Wedding spotlights recent Academy alums Hailey Gillis, Colin Palangio and Gordon Hecht in an intriguing extension of the star-crossed dynamic they explored in last year’s The Dybbuk. In a brazen display of bench depth, the likes of Deborah Drakeford, Caroline Gillis and Oliver Dennis fill out the rich world of Blood Wedding in small roles and Courtney Ch’ng Lancaster finishes the principal love square with a small, bare, brilliant performance as a young wife living without love.

In Jitters, the clever casting reaches its apex with stalwart character actor Oliver Dennis in the role of stalwart character actor Phil (delivering a doubled-over-with-laughter performance). The role of rookie actor Tom is appropriately played by one of the only Soulpepper newbies in the bunch, an adorably earnest Alex Furber, and Kevin Bundy hits all the right notes as a level-headed director trying to navigate a tumultuous opening. Mike Ross, who appears only sporadically on the stage amidst his larger role as the company’s musical director, reminds us why he still is called upon to appear on stage at least once or twice every season, stealing the show as a neurotic but brilliant playwright (an apt role for a composer). Potential is left on the table with the casting of the two lead roles, however. A pair of ageing performers- one a prima donna who has made a name for herself in the States, the other a lifelong working Canadian actor with all the anonymity and resentments that come with that- the roles are filled by Diane D’Aquila and Geordie Johnson who do a fair, if not impactful, job but neither carries the weight a more interesting casting choice would have. I wanted Soulpepper to have more fun with, especially, the role of Jessica by giving it to someone whose trajectory matches that of the character, a marquee name who wants to return to the theatre and isn’t afraid to laugh at herself a bit. D’Aquila’s character actress presence has the opposite effect, forcing her performance over the top in order to make up for the lack of diva-ness in her aura.

Soulpepper’s current spring repertory season has only two iffy casting decisions working against it. On the whole, it’s a triumph of cohesive but varied programming and the sort of across-the-board execution that really shows their strength.