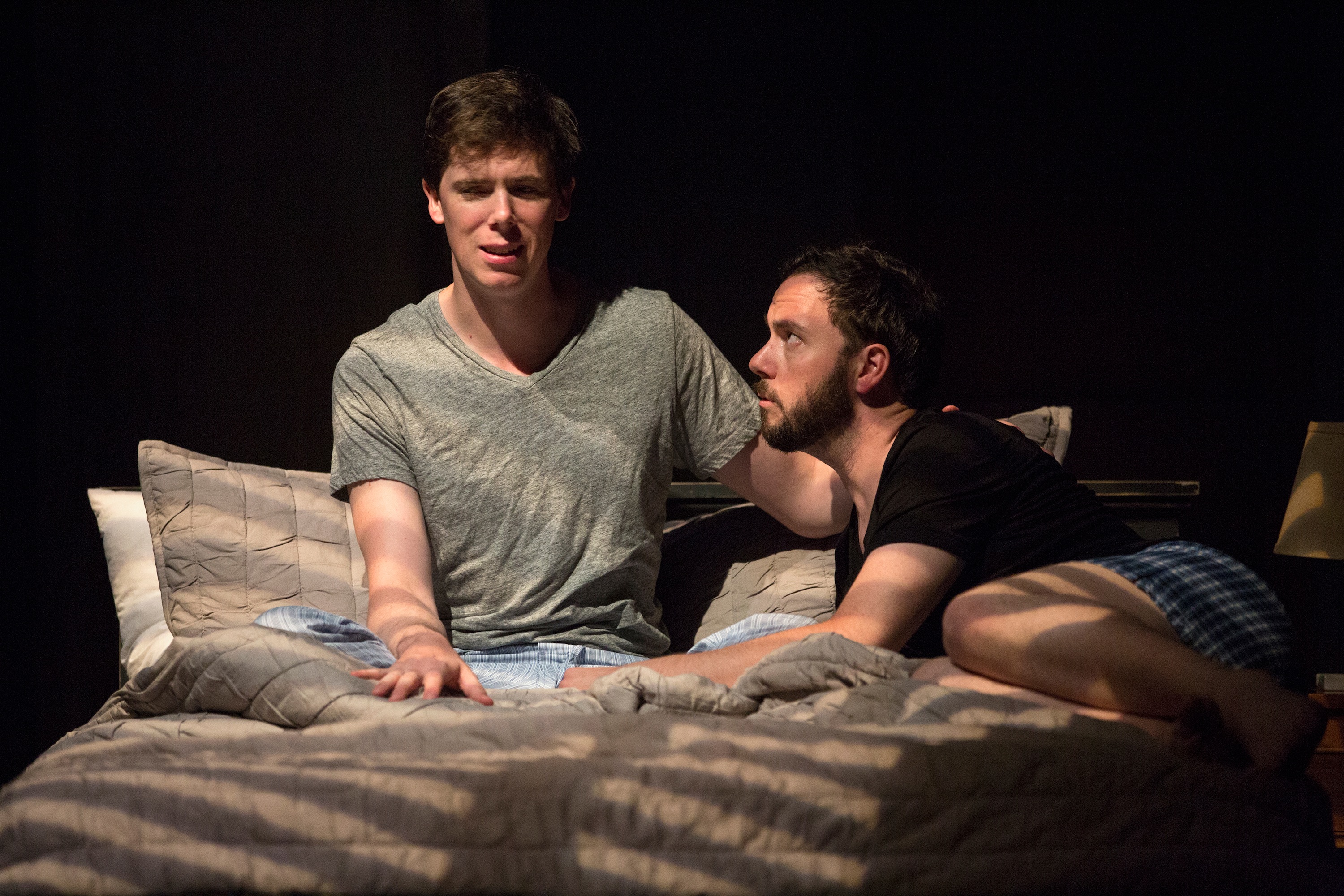 Soulpepper’s wildly successful 2013 production of Angels in America is onstage again this summer.

After winning two My Theatre Awards in April (Best Actor- Damien Atkins & Best Director- Albert Schultz), the 6-hour epic lured us back to the Young Centre today for another round.

Revisiting roles they played a little less than a year ago, the 8-person ensemble does even better work this time around. Gregory Prest’s Louis and Michelle Monteith’s Harper, in particular, feel deeper and more lived-in (Prest’s physicality as Louis is so wonderfully specific). I’d somehow managed to forget how fantastic everyone’s work on this production was.

Read our review from last fall (below) then book your tickets to The Young Centre to remind yourself.

Everyone is raving about the modern epic currently playing at The Young Centre for the Performing Arts. It’s been called “heaven sent” and “the best piece of theatre a Toronto company has mounted in many years” but what’s confusing me is the tone of surprise.

Soulpepper’s Angels in America is exactly what I thought it would be. Exactly. The acting company brings all the thoughtfulness and soulfulness and daring dedication to Tony Kushner’s 6-hour extravaganza that they bring to everything else (Nancy Palk showing massive range in what is known as “the Meryl Streep role”, Gregory Prest humanizing Louis with neurotic guilt and thrilling nuance, Diego Matamoros going full-throttle with hateful exuberance in his role as Roy Cohn). Albert Schultz’s direction beautifully walks the line of thoughtful (Mother Courage’s cart is a smart nod to Kushner’s influences), utilitarian (the use of a single space defined with light, sparse furniture and diverse doors is greatly effective) and restrained (it’s a rarely produced text so no need to fuss with it too much). Ace lighting and set designers Bonnie Beecher and Lorenzo Savoini respectively hold down their end of the bargain Brilliantly, as they always do, costume designer Savoini perfectly placing the action in time (New York in the 1980s) with character-defining costuming for, in particular, Louis and Belize.

Honestly, unless they cast it wrong, there was just no way Soulpepper doing Angels in America was going to be anything other than breathtaking. And they didn’t cast it wrong. No, the victory came on November 6, 2012 when Schultz announced the season. It was the choice to do such a massive, intimidating piece of theatre that was impressive. It was trusting the audience to show up for six hours of metaphor-laden AIDS-related storytelling (and pay twice to see both parts). I don’t know if the critics were unfamiliar with Kushner’s masterpiece (which I don’t actually love unconditionally but never fails to enrapture its audience) or if they were somehow unfamiliar with Soulpepper’s unflagging competence but, to me, when you put the two together it becomes a simple matter of arithmetic.

That’s not to say that Angels in America is either a perfect production or one without some surprising delights. My only real problem with the execution was the childishness of Michelle Monteith as Harper Pitt. The wide-eyed but slightly dark innocence that Monteith brought so thrillingly to her role in Hannah Moscovitch’s Little One makes a surprising reappearance in Harper. Wide-eyed but slightly dark innocence sounds like a good description of Harper if Monteith’s voice and manner didn’t so clearly telegraph youth. Her Little One character was a child sociopath so, while certain traits may transfer, the vibe is just shockingly wrong for the lost Mormon housewife. On the flip side, Damien Atkins is indescribably wonderful as Prior Walter. The wonderful contrast between his light manner and commanding voice gave Prior a great sense of gravitas beneath his near-constant patter of sarcasm and passive aggression. It’s a thrilling performance that raises the game of even his Soulpepper icon costars. The only actor I had never seen before was Troy Adams who took on the beautiful role of Belize with great wit and warmth. The compassion in that character is one of the keys to the whole play and Adams infuses it into every moment. I could take or leave Raquel Duffy as the titular Angel but I’ve never much cared for the writing around all the literal angel business so I’ll plead the fifth on further comment.

Angels in America as told by Soulpepper is exactly what it should be. It’s not just a blank staging of the text- these actors are far too good to rehash what’s already been done, they all find new levels to play- but it is, simply, an excellent execution of an excellent play, just what we all should have been expecting.