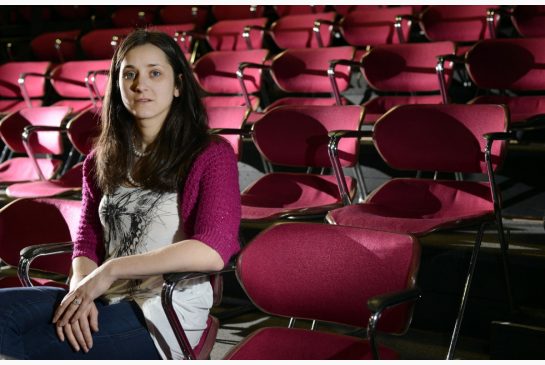 A Hannah Moscovitch Double Bill at the Tarragon

Tarragon’s current Extra Space offering is a sure-thing. They’re a Canadian playwright’s theatre and Hannah Moscovitch is a wonderfully talented, totally accessible, widely produced, generally beloved Canadian playwright who just happens to be Tarragon’s current playwright-in-residence, so a double bill of her newest one-acts is not only a smart decision artistically, it’s one perfectly in-brand to attract Tarragon’s specific audience. Moscovitch writes fantastically naturalistic dialogue with oodles of thrillingly interpretable subtext in the context of deep stories that refuse to wallow in dramatics. Her recent contemporary-set work has been exploring points of view just slightly to the side of what we know, rendering her tales relatable, fresh, and unexpected all at the same time.

The evening begins with Little One, a slightly re-worked remount of the hit 2011 Summerworks production, once again using standout talents Michelle Monteith and Joe Cobden as the story’s tragic siblings. It’s a small story about a lifetime of struggle and the conditions of unconditional love. With the Summerworks production in the back of my memory, the revisions largely escaped me, but the chilling effect of the piece is just as palpable as it was two summers ago; maybe even more so. Little One plays with structure and narrative more than its double bill counterpart and it’s that elasticity in perspective that makes Aaron’s recounting of life with his troubled sister Claire a beautifully nightmarish memory play.

After intermission comes Other People’s Children, a piece that resembles Little One only in its quality. While Little One jumps around in time, telling its story in recounted vignettes, Other People’s Children plays out entirely linearly with a practical set and mostly standard lighting and sound instead of stark blackness lit in slices with flashlights and spots like its predecessor. Directors and SMs aside, the plays share the exact same team from Moscovitch to the set/costume designer (Michael Gianfrancesco) to prolific lighting designer Kimberly Purtell, to John Gzowski’s sound design. It’s therefore a stunning achievement how beautifully contrasting the two pieces are in almost every way.

I preferred Other People’s Children simply because it was the one I hadn’t seen before. It’s a bit more melodramatic than some of Moscovitch’s other work- surely a side effect of its domesticity- but the beautifully subtle cast taps into the relatable conflict at the centre of it- a modern couple’s struggle with and against the reality of leaving their baby with a nanny. Moscovitch delicately builds each of the three characters in a way that leaves room to support the actors’ choices (a quality that’s remarkably rare amongst contemporary playwrights). The always–good Gray Powell is particularly great as the stoically dissembled Ben, attempting to read minds and stay firmly on the right side of ever-moving lines. Niki Landau has some strong moments and some grating ones as his neurotically self-involved wife Ilana, though I thought the overall effect was more of a vanity-free performance than of accidental annoyance. Elisa Moolecherry rounds out the trio with a warm and quiet portrayal of the nanny who saves and destroys the dysfunctional calm of Ben and Ilana’s world. In, particularly, Powell’s best moments, the power of Moscovitch’s writing and lack-thereof is most clear. She lets her characters be silent and lie and make mindless, loaded smalltalk with utter confidence that her actors won’t rely on face value. It’s a remarkable amount of trust Moscovitch has in the players tasked with her intricate characters, but it serves her work that she has it and I haven’t seen her let down yet.

Tarragon’s Hannah Moscovitch Double Bill plays in the Extra Space until March 24th with In This World replacing Little One for the final week.