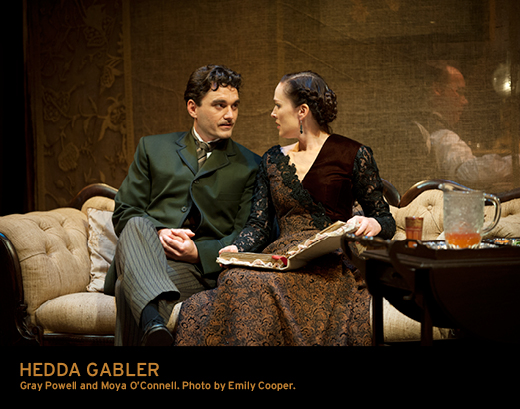 At the Shaw: Hedda Gabler

The Shaw Festival’s Hedda Gabler is good but not exceptional, and with a text as brilliant as Ibsen’s that’s not uncommon but always a little disappointing. The legendary Martha Henry’s direction isn’t bold. With fairly conventional character interpretations for the most part and little unexpected in emphasis, she lets the actors and the text do most of the shining. But she makes good use of space and the flow and pacing of the piece is strong. Henry also throws in tiny details that get a laugh and cement character attributes (like Hedda tossing the ugly cushions out of her sight line then holding them to her later on). Designer William Schmuck does interesting and beautiful things with his period set using a screen, a mirror and other such useful goodness that allows for interesting playing space. He also gives Moya O’Connell a thrilling wardrobe as the fashionable leading lady and drabs down the usually luminescent Claire Jullien for Thea Elvsted effectively. I think Mary Haney, however, is a bit too aesthetically put-together as Auntie Juju to offend Hedda as much as she does, an effect that’s either intentionally knocking Hedda further down the moral spectrum or accidentally making her even more of a bully. If it’s intentional, the blame lies with Henry who is making her story less complex by making Hedda more cut-and-dry dark; if it’s unintentional, then the blame lies with Schmuck who should have made Auntie Juju a little embarrassing, or at least make the hat offensively bourgeois.

The actors range from good to great with only Jim Mezon’s Judge Brack not living up to his utterly fascinating on-the-page incarnation. Patrick McManus makes a lovely, bumbling, well-intentioned Tesman who is just enough of a pathetic pushover to be frustrating. He’s written on the line of worthiness and one step too far in the wrong direction easily makes him Hedda’s victim instead of half victim half oppressor; McManus makes him compelling enough to marry but annoying enough to resent. His prying/beloved Auntie Juju is Mary Haney at her comedic best and Jennifer Phipps steals many a moment as the mostly silent maid Berthe. Claire Jullien completely transforms to play the mousy but optimistic Thea, falling easily and intentionally into the shadow of Moya O’Connell’s grand Hedda. O’Connell is strikingly beautiful and gives her Hedda the sort of smarter-and-prettier-and-more-refined-than-everyone coldness that makes the deference of the other characters easy to understand but Hedda herself harder to accept. Hedda is generally hard to accept, but in her small moments of vulnerability, and, maybe even more so, in her forced moments of patronizing kindness, if she seems capable of warmth her trapped and tragic life is a bit more unsettling.

My favourite in the cast is Gray Powell whose take on Eilert Loevborg is thrillingly understated, conflicted and thoughtful. Powell always manages to surprise me and is the only actor in Hedda who finds something in their character that I’d never seen before. Eilert is the most ambiguous and therefore the most easily interpreted of the characters (I’m not sure how one would go about getting creative with Tesman, for example) but Powell’s work is still remarkable. His Eilert is very quiet despite sharing the stage with characters like Hedda and Brack who are likely to walk all over someone quiet, and he seems perpetually ashamed of himself, or rather uncomfortable in his own skin. His tragic past and end are both written across his tortured face but he still commands the room and demands the attention and fascination of both the audience and the other characters.

Hedda Gabler is a great play. I’ve seen it done by underfunded amateurs and I’ve seen it over-directed to within an inch of its life, and it’s still always a great play. Martha Henry’s version currently playing at The Shaw Festival is as close as I’ve seen to a well-executed basic Hedda (the kind that you should see if you’ve never see Hedda before), one that lets Ibsen be the top-billed star. If only Hedda herself were more interesting than Eilert it’d be even closer to excellence.