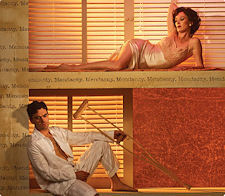 At the Shaw: Cat on a Hot Tin Roof

The first thing that stands out about The Shaw Festival’s current production of Cat on a Hot Tin Roof is Sue LePage’s perfect set. Tennessee Williams is notoriously detailed in his stage directions; he describes the feel of the place just as much as the look- the sounds, the smells, the generally intangible. With her detailed bedroom design, LePage captures all that with great power. Both beautiful and rundown, spacious but claustrophobic, the room the audience finds themselves spying on seems to steam with heat from the oppressive southern sun and repressed sexual frustration. Director Eda Holmes then fills that space with a compelling saga well-acted and staged if in desperate need of a more time-conscious cut.

Gray Powell holds down the action brilliantly, his silent Brick is tortured and sad but also frustratingly defiant. Struggling to keep his one good foot on the ground, Powell’s Brick steals the audience’s pathos as he falters beneath the weight of expectations- ours, his own, Maggie’s, Big Daddy’s, society’s, even Skipper’s.

The stunningly beautiful Moya O’Connell embodies the pushiest of forces bearing down on Brick with her tangibly desperate performance as Maggie. Though burdened by that tricky but mandatory accent, O’Conell is excellent in the role- skittish and unsettled in her attempts to keep her life together. Jim Mezon’s Big Daddy is a little more one note, less nuanced but still affecting in his less thundering of moments.

Cat on a Hot Tin Roof extends about 45 minutes longer than the audience’s patience for the fraught family. But along the way a star turn from Powell and the tremendous contribution of LePage both prove invaluable.

Cat on a Hot Tin Roof plays at the Royal George Theatre in Niagara-on-the-Lake until October 23rd.