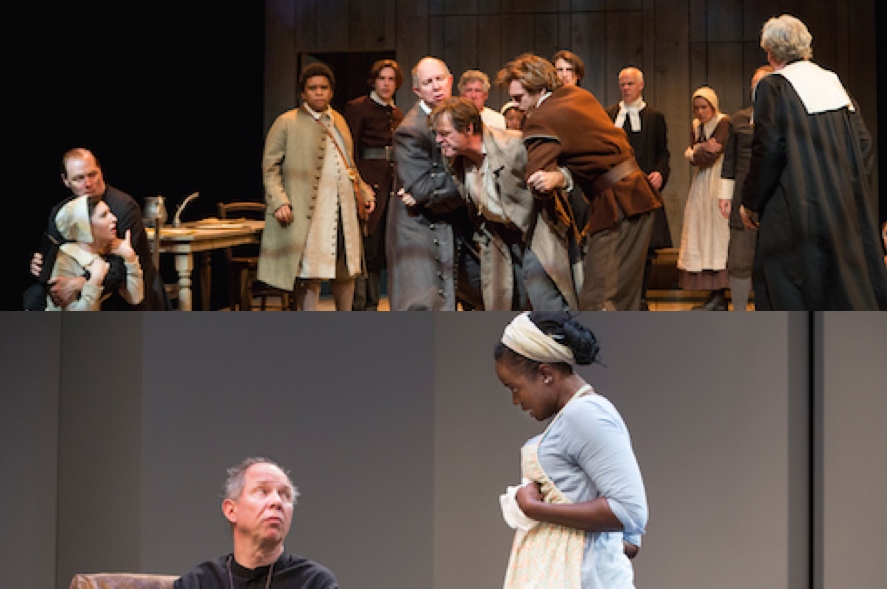 The Soulpepper Academy is one of the most consistent breeding grounds for up and coming theatre artists in the country. Albert Schultz’s proven eye for talent and an excellent combination of training and mentorship throughout the 2-year program has resulted in a slew of promising players class after class. The program keeps expanding (there are more producers, stage managers, designers and playwrights this time around) but a strong academy graduating class has traditionally featured two or three performers who make their name pretty quickly upon leaving the program- whether on the Soulpepper stage or elsewhere- and the easiest way to tell who that will be is by their performances on the Soulpepper mainstage near the end of the program.

The current class isn’t graduating until June but they’re filling their first big roles with the company right now in Soulpepper’s outstanding new production of Tartuffe and remount of The Crucible. The directors, designers, playwrights, producers and stage managers are still apprenticing so it’s hard to spot the standouts (though from non-Soulpepper experience I can advise you to keep your eye on playwright and 2013 My Theatre Award nominee Anthony MacMahon) but, judging strictly from the acting class, this is the strongest group yet. Between Tartuffe and The Crucible, nearly every performing member of the current academy has a standout moment that hints at a successful career to come.

Joining Soulpepper greats like Tartuffe‘s perfectly slimy Diego Matamoros, Gregory Prest as the delightfully cerebral Cléante and Oliver Dennis as a brutally blind Orgon- not to mention Stuart Hughes in his career-best role as The Crucible‘s John Proctor (alongside one of my favourite actresses in the country Laura Condlln, who is new to the production as a brilliant Elizabeth Proctor)- it’s remarkable that the academy members are able not only to keep from being overshadowed but to actually shine quite brightly themselves. The following are some of the standouts:

Oyin Oladejo– the biggest star turn of the group comes from Oladejo who steals Tartuffe right out from under the likes of Tartuffe (and the other host of heavy hitters who make up this season-best production). As the mouthy maid Dorine, Oladejo is vibrant, fresh and hilarious, sticking her nose where it doesn’t belong, setting her employers straight, and morphing the trickily rhyme-tastic translation with nuanced, modern delivery. She also shines in the small role of Bajan slave Tituba in The Crucible but it’s the straight-shooting, playful Dorine who really points at greatness.

Frank Cox-O’Connell- in Tartuffe, Cox-O’Connell mostly just walks across the stage as a servant to the title character. Soulpepper is a repertory company and it’s not uncommon for leading players to find themselves moving chairs or standing in the background as their entire contribution to a production. A trained eye can often spot a leading player relegated temporarily to the background- a natural stage presence, a strong choice or two, a sense of character work even without any lines. Cox-O’Connell plays Laurent like a leading player, giving the silent character a personality and point of view that far outstrips the text (and steals more than his fair share of laughs). The compassion and moral complexity he brings to his slightly larger role in The Crucible confirms all suspicions.

Hailey Gillis– one of the only academy members I was familiar with before she showed up at Soulpepper, Gillis was on my radar as a musical theatre performer from the CBC competition show Triple Sensation. Knowing she’s a great singer (a skill shown off a little in The Crucible) and a strong dancer, it’s great to see her putting so much stock in the most often overlooked prong of the triple threat- straight acting. Abigail Williams was probably the biggest showcase on offer to the academy in either of these productions and Gillis delivers an excellently powerful and infuriating performance as the instigator of The Crucible‘s horrors. As I said before, Albert Schultz has a great eye and he must see something special in Gillis to give her the lynchpin young role in the Crucible remount.

Gordon Hecht– as a bumbling, stubborn and sweet Valère, Hecht’s turn in Tartuffe is so utterly charming that he promises to be one of my favourites if he sticks around the Soulpepper stage. He has a lot of leading man potential and could prove a key repertory player. He was also well-cast in Idiot’s Delight and I seem to remember him standing out in Spoon River Cabaret, both of which bode well.

Mikaela Davies– the last person to play Mary Warren in The Crucible was arguably the biggest star of the previous academy class (2013 My Theatre Emerging Artist Courtney Ch’ng Lancaster). It’s telling, then, that Schultz gave this emotionally complex role to Davies who also scored one of the bigger roles in Idiot’s Delight last winter. The versatile Davies (who I think looks distractingly like Natalie Dormer, which is definitely not a hindrance) is my pick for the girl most likely to stick around come graduation day.