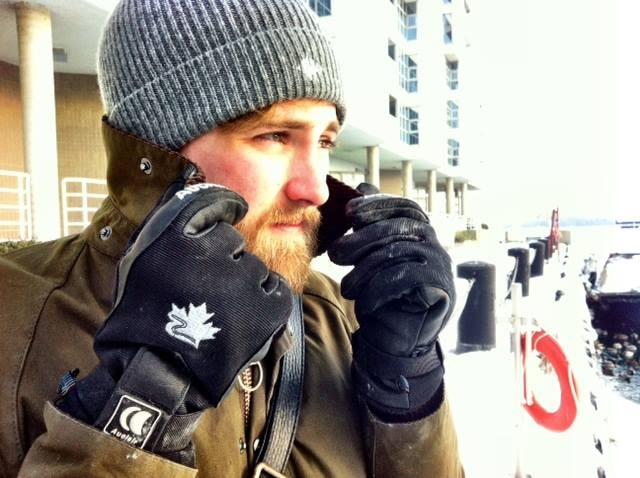 Quite possibly the best thing about having a summer peppered with indie theatre festivals is that the chances of discovering a great new playwright are a lot higher than they otherwise would be. For me, that meant back to back SummerWorks festivals highlighted by an Anthony MacMahon play. In 2012, it was The Frenzy of Queen Maeve– a melancholy love triangle tinged with Irish warfare. In 2013, it was the acerbic, intelligent, and emotionally rich Wild Dogs on the Moscow Trains, one of the Best New Works of the year.

The emerging playwright and current Soulpepper Academy member joins our series with an interview that skillfully balances charming wit with erudite Chekhov references.

Can you remember your first experience with theatre?
My first theatre experience was seeing Little Shop of Horrors at Persephone theatre in the early nineties. I was about…4, maybe 5? And I believe Tom Rooney was in the cast, but I could be completely mistaken about that, as I have an absolutely brutal memory. So if he wasn’t, and he’s offended that I brought him up in this interview, I apologize. But I remember it being pretty fantastic.

My first experience being involved in theatre was in high school. I wasn’t able to take Spanish because of my English class, so the guidance counselor recommended I enrol in drama, because he’d seen me run for class president and knew that I liked speaking endlessly. From drama class, I auditioned for the school play, Catch 22, and got a role. I still can’t speak Spanish.

What writers have always inspired you?
Always? Tough question. The first writer to make me go “Oh, that’s really cool”, was Hemingway, because I’m in no way original. The first dramatist to inspire me was Martin McDonagh, followed by John Patrick Shanley, followed by Conor McPherson. Now I’m stuck on this Henrik Ibsen/Anton Chekhov thing. Particularly the former’s poetry plays and the latter’s symbolism.

What was the first thing you ever wrote?
The first “thing” I ever wrote, more than likely some fan-fiction about some video game when I was a young’un. The first play I ever wrote was a piece called “AstroNOTs”, which was a sort of “Neil Simon sitcom meets stoner comedy meets homage to my own geekdom” in which someone smokes a lot of pot and tries to build a rocket to the moon. It was ostensibly written because my friend and later collaborator Nathan Howe didn’t cast me in his fringe show, and I felt left out.

What do you think is the best thing you’ve ever written?
I’ve been happy with my writing one day and appalled by it the next. There was a scene that I wrote for The Frenzy of Queen Maeve when Nathan Howe and I produced it in Saskatoon that sticks in my memory. It had a teddy bear, a car bomb, and questions about nationalism. I liked that a lot.

We first encountered your work when you produced Queen Maeve at SummerWorks 2012.  Tell us about developing that production.
The Frenzy of Queen Maeve had a long gestation period. I started writing it when I got appendicitis in theatre school during a run of Woyczek and had to sit out for a number of performances. I worked on it independently for about a year, and sent it off to the Saskatchewan Playwrights Centre, where it was dramaturged by Gordon Portman, then later by Ellen Peterson and Michael Scholar Jr. After that, further dramaturgy by Lois Brown in Ottawa. And then I got accepted into Summerworks, which inspired the move to Toronto.

I cast the play by reaching out to theatre schools, appealing to recent graduates, as well as by asking 2 friends to tell their 2 friends that I had a play going on. Through that, I found my cast. My stage manager/designer/person who did most of the actual work on the production, Jenna Maren, who was also from Saskatoon, can attest that we had a ton of difficulty. We had no connections or presence in the city, no idea how advertising or promoting worked, and not a single favour to call in, which is an essential part of producing indie theatre. In the end, our Toronto cast pulled through and managed to get some people in the door, and at the same time doing a pretty fantastic job treading the boards.

You returned to SummerWorks last season with your My Theatre Award-nominated script Wild Dogs on the Moscow Trains. Where did the idea for that story come from?
The idea for the play came from two articles, one about the titular Wild Dogs, and another about the differences between reptile, mammal, and human brains, that I’m sure was dumbed down to some extent so that a pleb like me could read it. I was interested in having three people on-stage who reacted to crises with different parts of their brains, based off instinct, emotion, or logic. Which was I guess where it began.

Did you go through a lot of drafts? How did the play change through the development process?
Yeah, a bunch. I started writing the play with Murder Pattern by Herman Voaden in mind while I was producing Vimy by Vern Thiessen. So I had some kind of weird symphonic expressionist meets theatrical poetry piece in my brain. The first dramaturg who read it said I needed to quit trying to be cool and start trying to be good. So it became a Chekhovian naturalistic piece, with a nod to some sentimental soviet plays, like The Promise.

What sort of research goes into your writing?
It’s pretty dependent on the play. Occasionally I’ll fly by the seat of my pants and say “to hell with logic”. With Wild Dogs I tried to dive in headfirst to get a real sense of the life of the characters. After finishing a couple drafts, Joanne Williams, our director, sent it off to a number of different people to be “vetted” for Russianness, which was pretty cool. A big part of our production was an attempt to establish authenticity out the gate, so that the ideas in the play could be discussed without the audience’s minds wandering and asking “should that rug really look like that?” or “that’s a silly pronunciation of that word”. This is my fictional pedantic audience talking.

What’s your writing process like? Do you plot and plan or just start at page 1 and work through?
Again, it tends to change from play to play. One of my dramaturgs once gave me the Nietzsche quote “writing is vomiting”, and I’ve taken that to heart. I tend to think about something, get interested in it, get mad about it, make some notes, and then burst at the seams. That’s where my best work tends to come from, anyhow.

How do you approach casting your work? Are you ever able to find actors who fit perfectly with what you had in your head while writing? Do you write characters for a specific actor?
I try not to think too hard about writing for an actor, but on occasion one will flit through my mind and that might steer the course of the character. With Frenzy, I was still writing it very much in the mindset of an actor, so my main concern was writing roles that I would want to play. I suppose I cast it, to some degree, based off seeing if the actor would perform it the same way I would. Which is a monstrously egotistical thing to say. For Wild Dogs I had the privilege of working with Joanne, who has a fantastic mind for casting. The first conversation we had about the play she had a list of some fifty plus actors and different possible combinations within that list.

Are you very prescriptive in your stage directions or is each play re-imagined a bit in the rehearsal process?
I try to be as non prescriptive as possible. I’ll tend to write things like beat, pause, fight, kiss, and little else. I really like to leave the scenography to the designers, as they’re much more proficient with that artistic language than I am.

Victor Dolhai is nominated for playing Pyotr in Wild Dogs. Tell us a bit about working with him on that character.
Victor is fantastic. He’s got a very individual, extremely creative approach to his work, and it was fascinating to watch. I wasn’t able to attend every rehearsal, and I found that between one to the next he would have a completely different approach to a scene, because he’d realized that his previous ideas didn’t work just so. So through experimentation, he found something essential. At one point, he and Joanne got the idea that he would mouth along/sing along to the final song in the play, which was the moment where the play really clicked for me. It was like the string breaking in The Cherry Orchard. The exact bit of non-reality that explains something about a character, that they’re somehow in touch with the world around them, even if they lack awareness of it. Or something.

What are you doing now/ what’s your next project?
I find it scary to answer that, because there’s a chance I won’t finish them, and it will be in print that I didn’t follow through on my ideas. For what I can answer, right now I’m at Soulpepper as part of the 2013-2015 Academy as a playwright, where I’m working on a few projects. In general terms, I’m doing an adaptation of a short story, a reworking of a classic, and a potentially comedic epic. I’m starting to get really interested in theatrical productions of a massive size and scope, whatever that means. Essentially, trying to use my imagination as much as possible.