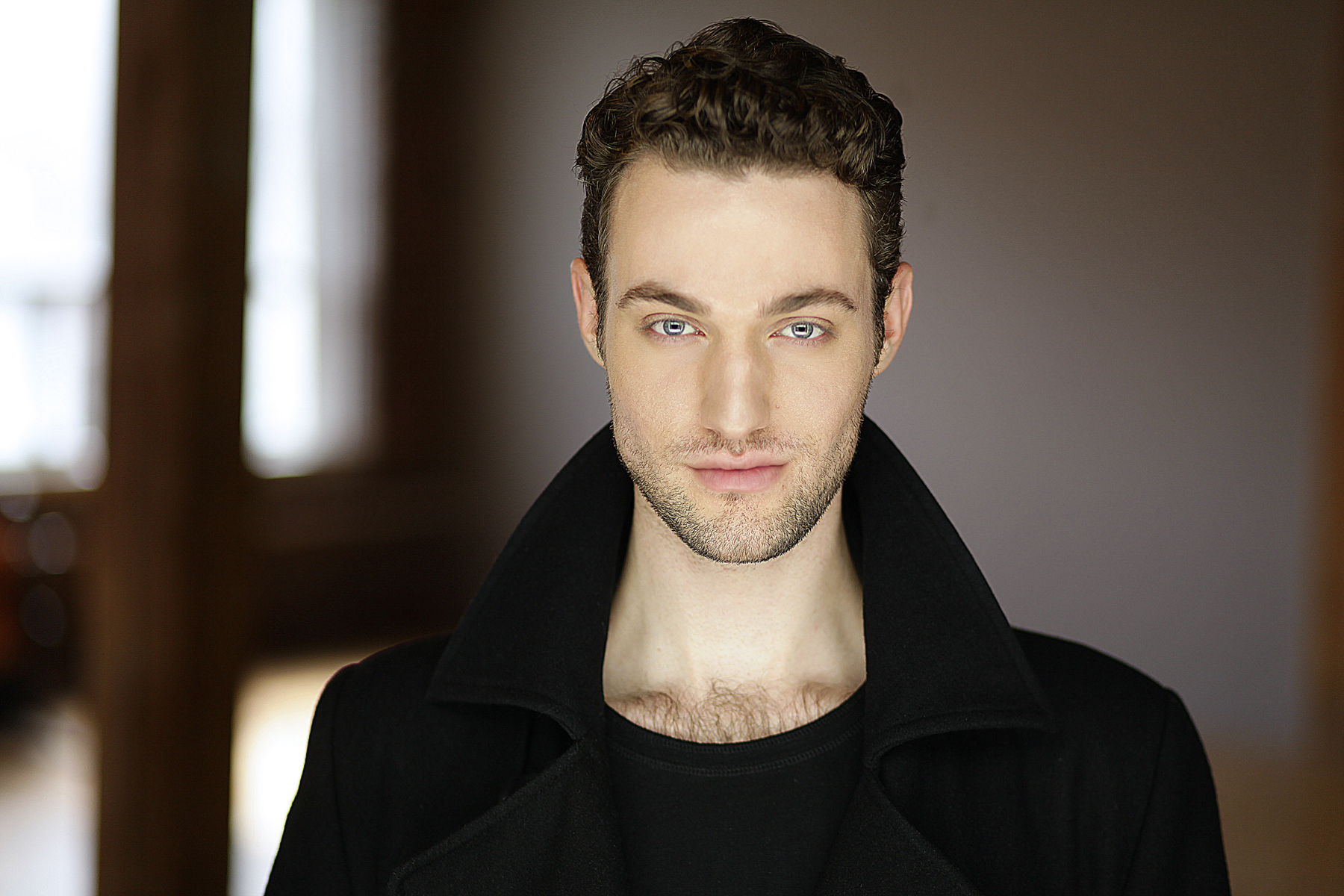 Contributing author Tessa and I have a favourite pastime of picking out emerging artists in undeservedly small roles on our annual trips to The Stratford Festival. A few years back, our top pick was an impossibly handsome young ensemble member named Victor Dolhai who was busy stealing scenes in the likes of Twelfth Night and The Matchmaker. Come 2013, Tessa and I found ourselves finally seeing Victor in a lead role, at the SummerWorks festival.

Said lead role was a fantastic one- Pyotr, the complex and charismatic star of Anthony MacMahon’s thrilling new play Wild Dogs on the Moscow Trains. The jovial actor so lived up to (actually, surpassed) expectations that he was shortlisted for his Best Actor in a Regional Production My Theatre Award nomination the moment the metaphorical curtain fell. He joins the Nominee Interview Series from Victoria where you can catch him as Tom in The Glass Menagerie until March 2nd (get your tickets HERE).

Can you remember the first theatre production you ever saw?
The first piece of theatre that I ever experienced was a production of Hamlet in my hometown of Victoria produced by one of Canada’s oldest community theatre groups The Victoria Theatre Guild. I remember being engrossed in the story and marvelling at the magic taking place on stage, and knowing that this world of theatricality was a place I most definitely wanted to inhabit as I grew older.

What’s your favourite role you’ve ever played?
One of my favourite roles I have ever played was in a production of Théâtre de Complicité’s adaptation of The Street of Crocodiles at the Phoenix Theatre. I played a character called Cousin Emil who developed throughout the rehearsal process into a fiddling polyglot who would muse about his adventurous life in German, Spanish, French, Hungarian, Rumanian and English regardless of whether the other characters in the play understood what he was saying.

Do you have a dream part you’d like to play one day?
I truly believe that I don’t pick the parts, but rather, the parts pick me. Roles that I have played in my life have mysteriously and serendipitously come into my consciousness right at the exact time that I have needed to learn life lessons that were thematic within a specific play, or encounter people during a creative process that I needed to meet who would later make huge impressions in my future. However, if I had to choose a few for fun, I would say Brick, Biff Loman, Orestes, Lear, Edmund in Long Day’s Journey Into Night, either of the guys in Who’s Afraid of Virginia Woolf… I also aspire to one day be in professional productions of Chekhov, Ibsen, Strindberg, Pinter and Wilde.  Several good farces would be satisfying as well.

Tells us about your years in Stratford. Do you feel that your time there had a big influence on you as an actor? Do you hope to return someday?
I will forever be grateful for my three years at the Stratford Festival. My time there was a period of huge professional and personal transformation and education, not only onstage, but also off. So many lessons were learned about how to fluidly maneuver within all aspects of the theatre world. Working at any theatre festival can be a dream come true when you’re playing a part you’re passionate about, with a cast and director who inspires you. If this formula appears in the future, I would return in a heartbeat.

How did you get involved with Wild Dogs on the Moscow Trains?
I got involved with Wild Dogs on the Moscow Trains when the awesomely talented director of the piece, Joanne Williams, invited me to audition for the role of Pyotr. Funnily enough, I wasn’t originally cast in the part, but was later offered the project when the first choice had to back out. The experience was such a clear example of how we can truly never know what to expect in the industry, so I must work as hard as I possibly can whenever opportunities present themselves.

Had you ever worked on a new play before? How does the experience differ from performing an established text?
I have worked on new plays. Primarily these projects have been with two Victoria-based companies: SNAFU Dance Theatre, which I helped co-found with Ingrid Hansen and Sarah Jane Pelzer, and also Atomic Vaudeville, where I’ve been a company member for several years. I find that the difference can be described through the use of a rollercoaster metaphor. In original work, you are building a rollercoaster ride (that is your character’s journey) from the ground up with the help of the playwright, composer, choreographer… However, with established texts, the rollercoaster is already there for you to ride, so you have the opportunity to surrender to an existing construction, and give yourself over to someone else’s creative outlook, rather than try to express something that was highly influenced by your own personality and environment. I find both routes to be thrilling.

How do you prepare to play someone with an intellect like Pyotr’s? Did you do much research into post-Communist Russian politics and modern life in Moscow while preparing for the role?
Preparing Pyotr included lots of study into the world of contemporary Russia with its complex political and sexual landscapes. Many movies were watched, and many books were perused, but I have to say that luckily, Anthony MacMahon, our incredible playwright, had already created such a fully formed character, that much of the cerebral makeup of Pyotr was existent in the text, so all I had to do was take a deep breath and truthfully bring him into the physical world.

You played a funny character in a tragic text. How did you strike that balance between Pyotr’s sense of fun and the discontentment that lay underneath?
When I think of an answer to this question, a classic saying pops into my head: comedy is tragedy plus time. Funnily enough, I don’t think that Pyotr ever sees himself as being funny. He definitely is aware of is quips and bon mots, his erudite musings and jabs, but all of these thoughts and feelings come from a place of deep internal turmoil. The sadness, loneliness, confusion and hopelessness that make up this turmoil, mixed with the comedic timing inherent in the text, created the possibility for laughter. Oftentimes, it is the most troubled people who are the funniest it seems.

What is your favourite rehearsal memory?
One of my favourite rehearsal memories occurred when we were figuring out what type of stage blood to concoct for me to use after Pyotr is brutally bashed during a protest. One recipe was created from a base of chocolate sauce. During the run, we doused my head in this fluid, and for the rest of the run I was distracted by the taste of cocoa seeping into my mouth, and the sticky sting of it in my eyes.

Anthony MacMahon, who wrote Wild Dogs, is also nominated this year. Was he around during the rehearsal period? What was the most important conversation you had with him or your director (Joanne Williams) in developing Pyotr?
Anthony was around during the entire process, from auditions to closing night. He was also producing the show with his company Live Lobster Theatre, so his presence was encouragingly constant. One of the most important conversations we had with Joanne was about how even though Pyotr is a highly intelligent person, he is still vulnerable to the despairing outlook of so many other young Russians in his surroundings. This, paired with his dangerous, addictive curiosity, leads him down the path to cooking up krokodil, which ultimately destroys everything he loves.

Tell us about working with Ewa (Wolniczek) and Jonathan (Koensgen).
Working on this play was a true blessing because, in the incredibly tight knit world of theatre, it is rare to have the opportunity to work with people you have never worked with before. Oftentimes, because of loyalties and budgets, we work with our friends; people we have a shorthand communication with and an existing trust in. However, with Wild Dogs on the Moscow Trains, I literally had never worked with anybody in the cast or creative team. This allowed for an extraordinary opportunity to listen fully and digest completely new ideas that weren’t already floating around in my theatrical vocabulary. Ewa and Jonathan were a dream duo to latch myself onto during the process because they were so open to having a stranger in their midst. I admire Ewa’s diligence, intelligence, humour, and wide-eyed wonder at the magic of the stage, as well as Jonathan’s passion, determination, strength and bravery. I miss them both and would love to be on stage with them any time! Remount! Sequel…?

Did you have a favourite moment in the production?
I’ll reveal a little insider secret for this one. In the midst of closing day hecticness, the cue for the top of the show somehow went astray, so as Jonathan and I were waiting to start the performance, lights went down, music started up, and we had to dash to places before the lights came on! Fittingly, I began the show entering with a huge laugh, and on closing I was guffawing in all truthfulness to the mistake that somehow transpired.

You’re working on The Glass Menagerie now. How’s Tennessee Williams treating you so far?
[I’m playing] the part of Tom in Blue Bridge Repertory Theatre’s production of The Glass Menagerie in Victoria, and I am finding the process to be entirely engrossing and inspiring. Tennessee Williams has created such a complex, beautiful, enraging, exhausting and gripping emotional world filled with love and humour. The character of Tom continues to reveal more and more as we excavate the play, and this is truly a sign of a genius playwright.

Do you have anything you’d like to add?
I would like to thank you and everyone who made my Toronto debut such an enjoyable experience, and I look forward to crossing paths with all the nominees at the upcoming awards ceremony!