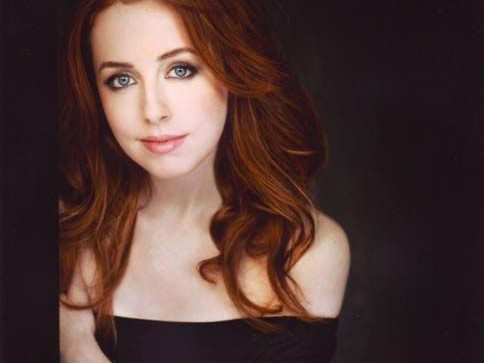 One of The Stratford Festival’s great leading ladies, Amanda Lisman is perhaps best remembered as Roxanne opposite Colm Feore’s Cyrano, but it was her performance as the mostly silent Lavinia is Darko Tesnjak’s brutal Titus Andronicus last season that earned her a Best Supporting Actress nomination in the 2011 My Theatre Awards.

Can you remember your first experience with theatre?
Um… I guess it was playing Snowflake Number One in a Christmas Concert. *laughs* I thought it was fantastic that I got to be first on stage.

Who are some of the actors and actresses who have always inspired you? Are they the same today?
I think it’s evolved, but, I didn’t really get into theatre until I was about 19.  And in that time I’ve seen a lot of performances, but my time at Stratford was pretty monumental in shaping the kind of actors that I really appreciate. Some of the people that I’ve really loved watching are Kelli Fox, and Tom McCamus. Just actors that are really passionate about what they do, and incredibly natural, and intelligent, articulate people.

Can you describe your first day at the Stratford Shakespeare Festival? How did you get your start there?
The specific exciting audition was coming into a room with Donna and Colm Feore and reading scenes for Cyrano with Colm Feore. That was a pretty kind of major introduction to the Stratford Place. Working with those kind of juggernauts of theatre. And then my first day on the job was rehearsing for Macbeth and being one of the sisters in that, and I was just kind of overwhelmed by the talent in the room. Like meeting Des McAnuff, and having Colm Feore there and Geraint Wyn Davies, and just the resources and the talent that’s at Stratford is pretty awesome.

Do you try and see every play in the season? What were some of your favorites from 2011?
Yeah, I do see everything. Obviously, Jesus Christ Superstar was really dazzling, and I loved that very much. I really, I guess, they all start to blend together—what was the one with, I dunno, I want to call it Half Life, no the John Mighton play—

You first caught my attention in 2009 as Roxanne. What was it like to play opposite Colm Feore?
It was exciting because he’s such a charismatic performer. And to try to meet him everyday on stage was a challenge. I was quite a young, new performer to professional theatre, but he was always incredibly generous with me and really good humoured. So those two guys- Mike Shara and Colm Feore- are absolutely hilarious and very quick-witted, so trying to keep up with them was a challenge, and a joy to do.

Roxanne’s pretty tricky because she’s the heroine on one hand but she’s also, sort of in her own way, responsible for a lot of the heartbreak of our hero. What was it like having to walk that line?
Well, you know, it is a tricky part actually because she kind of has to play dumb through most of it. You know, the audience is in on the joke, that she doesn’t get in on until the final moments of the play. So to play ignorant through a majority of the play, while these two men manipulate her—I mean, that’s my perspective—is sort of the tricky part, while maintaining a sense of her being intelligent and kind hearted and just completely ignorant of the fact that Cyrano had any feelings for her.

Did you have a favorite moment from that production?
I really enjoyed the last scene, actually. She’s a nun, and cloistered, and he comes in and he’s dying, but she doesn’t know it yet. And I think I always loved that because, in quite a spectacular production with many, many actors on stage quite often, it became, in that time, a two-hander between two people that have spent a large portion of their life together. And I just sort of liked the quiet tenderness of that final scenes, where you get the payoff.

Your My Theatre nomination this year is actually for your amazing perfomance in Titus.
Aw, thanks.

Can you tell me about stepping into that mostly-silent role?
Right. Well, I joked with a few people that a lot of actresses play silent roles all the time, although it’s not as … uh, obvious as playing a character whose tongue was removed. But I think women in theatre are often silent on stage, and so I’ve had lots of experience being in scenes and not having much to say, and having to live an inner life onstage, having that inner monologue going, and reacting to the men that get to do most of the talking generally. But it was a really rewarding experience, largely because Darko [Tesnjak], the director, was so creative and intelligent, and generous, and so he created an environment that was fantastic to work in and I think an interpretation of the story that was really exciting.

Your Lavinia was angrier than I’ve often seen. Was that your way of giving her more strength despite her being the play’s biggest victim?
Yeah, I think. I guess I did. Maybe because I’m more angry about the way women are treated, and so there’s a slightly modern interpretation in that I think there’s just as much injustice, if not more, towards women today. And so I, yeah, I mean, during rehearsals, and playing the part, I was often quite angry at what had happened, and angry at the men for going on and on about their feelings, you know, like a large portion of their reactions are just these endless speeches about how sad they are, and I— *laughs* she’s sitting there, thinking, “what are you gonna do about it?” But it was also Darko’s interpretation was the, the idea of her coming out with the knives in the end and being the one to kill the boys instead of it being Titus as the one to slit their throats. And so that encouraged me to go to that place.

Did you have favorite parts of that production?
I think that moment of revenge was always extremely satisfying. And the reveal of these large knives was always a satisfying conclusion to a horrible journey. And it’s interesting to get the audience feedback whether it’s horror, or sometimes a round of applause, or laughter, or shock—that was always kind of the rewarding part of the horrible story. Not that I’m condoning revenge violence, but I guess I’m just saying that in a theatrical way it’s exciting. And I really just loved working with the cast. You know, Skye Brandon played my husband [Bassianus], and he’s just a joy to work with, and John Vickery [who played Titus] and I have done every play together—that I’ve done at Stratford—he’s been in the cast and he really became kind of a second father to me, so it’s really a pleasure.

Titus is often considered a really darkly comic piece. Did you find that the audience would sometimes laugh at the wrong thing?
No. If anything, we wanted them to laugh a bit more. But Darko definitely didn’t shy away from that humor, and as the play progressed, I think it got more and more absurd. And he was inspired by Fellini, and I heard somebody compare it a bit to Monty Python at moments. So I was glad when people laughed, because even in the darkest moments we find humor in things. And the other day I was talking to a friend about his divorce, and the facts surrounding it, and what’s happening in his life right now, and all I could do was laugh, because it was so absurdly awful, what was happening to him right now, that you know, you could find the humor in something totally grotesquely awful. Sometimes that the only response.

You mentioned Skye Brandon and John Vickery. Who are some of your favourite people to work with at Stratford?
Oh gosh. I’ve had a really positive time there, so specific favourites is sort of unfair.  But actually, Claire Lautier, I can’t say enough good things about her, and she was in The Tempest with me, we played the Goddesses that come out for three minutes. *laughs* And then her playing Tamora, and she’s one of those really generous, very  intelligent, very good-humored, down-to-earth people that I really respect, so yeah, I can’t say enough good things about her. And you know when we worked on the Zastrozzi in 2009, I also can’t say enough good things about Rick Robert. I wish he would be back at Stratford, I think we’d love to see more of him. But yeah, I just really appreciate people that are very much about the work and have a great sense of humor and are just highly professional about it.

If you could pick one definitive moment in your career up to this point, what would it be?
Um, I guess, I don’t know if I could pick a moment, because I’m constantly growing, and if I look at my past so far, and how I’ve grown and changed even in my experience with Stratford I wouldn’t be able to pick one moment and say “that’s who I am as an artist” because it’s always changing, and certainly if, you know, if you followed who I was as an artist and a person when I did Cyrano, and now, having gone through the experience with Titus, I’ve changed a lot. And been, hopefully, improved by all the people I’ve come in contact with.

Do you have any dream roles you’d love to take on?
Well, I’d love to continue with Shakespeare, I’d love to play some of the great women of Shakespeare, like Lady Macbeth, but I’d also really like to get into more comedy, and that’s something that, at Stratford, I haven’t done that much of, I guess I’ve played sort of more of the victimized virgins than the comedic parts, but I really love doing comedy and so that’s somewhere I want to go with my career as well. It’s just there’s more variety in it and being able to challenge myself in different areas.

So, are you coming back next year?
No, I’m not. No, I’m going to be in Toronto and, you know, pounding the pavement, see what happens. I think three years is a great amount of time to be in one place, and to learn a great deal, and I feel like my third year was especially productive and joyful and so I think it’s a great time to go away and have new experiences, and hopefully return to Stratford at some point.

What are you working on now?
I’m currently just trying to challenge myself in the film and television world. Because that’s something I haven’t done much of in the last few years, being concentrating on theatre. So yeah, trying not to articulate too much *laughs* and just get in front of the camera, and just see what happens there. And looking forward to the spring, when I’m returning to my hometown of Victoria and doing a production of Shaw’s Arms and The Man, so that’ll be fun to do a bit of theatre as well.