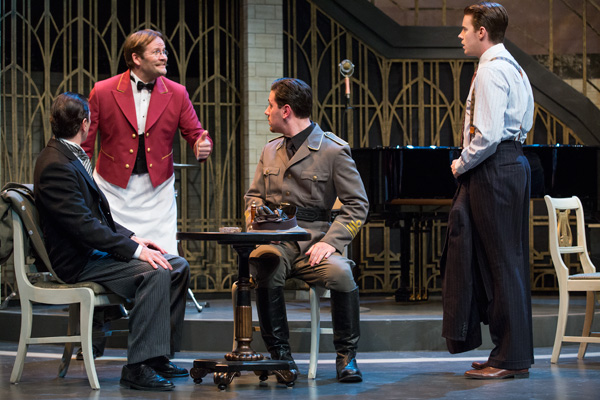 Soulpepper’s 2014 season opener has a cast of great talents. The massive ensemble makes use of the Academy’s rising stars and the bench-depth at Soulpepper is so impressive that they’ve got the likes of Jeff Lillico and Evan Buliung playing bit parts and waitstaff (actually, small part though it is, Buliung’s gentle Austrian workingman is a highlight of the show). The cast of this scattered pre-WWII comedy (is it a comedy?) is so large that it almost feels like director Albert Schultz threw in everyone he knows (at least the ones not tied up at CanStage). The result is that a whole bunch of people seem miscast. Paolo Santalucia is still too young to play a convincingly authoritative military captain while Gregory Prest is at once a bit too old and a bit too bright-eyed to play a naïve but outraged revolutionary (I almost think a straight role swap would have worked better). Raquel Duffy makes a good mysterious femme fatale but since when can Courtney Ch’ng Lancaster pass as a vapid blond (even if she does play the character as savvy as possible)? The one role perfectly suited to its performer is that of American showman Harry Van, a debonair wheeler and dealer dragging his troupe of dancing girls through the Italian hotel setting on their way to a new gig. He sings, he plays the piano, he charms the whole world and he falls in love a little bit- the sort of role Dan Chameroy can play in his sleep.

He likely could play it in his sleep since the production’s only thrilling moment is the end. Luckily, the ending isn’t the best part because the play is finally over (though that’s a good thing) but rather because it’s the point at which the real world finally comes crashing in on this crowd of trivial people in trying times. The post-curtain call coda is absurd but the ending as staged by Schultz is actually fairly evocative. Too bad the rest of the play doesn’t come close to living up to its resolution, or its cast.