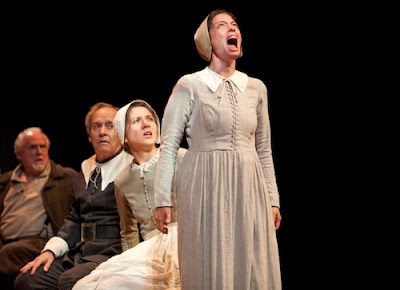 Arthur Miller wrote The Crucible in response to McCarthyism in the 1940s-50s, and it is appropriately infuriating. Responding to the communist witch hunt that was targeting writers like himself, Miller wrote a piece that would become one of the most widely produced American plays in history, about an actual witch hunt. He uses the 1692 Salem Witch Trials as a cautionary tale and, more terrifyingly, a condemning parallel to his own experience with the House Un-American Activities Committee and the horror of his collaborator Elia Kazan naming names. Kazan’s likeness becomes a group of young girls, led by the atrocious Abigail Williams, who claim to have seen several of the town’s most upstanding women in the company of the devil. The thoughtless lie, told to get the girls out of their own set of questionable-behaviour-based trouble, spirals effortlessly until the women named are put on trial for witchcraft and told that only a confession can spare them from hanging.

Oh how I hated The Crucible. It’s a rare modern drama with a household name but before Soulpepper’s current production I’d always managed to avoid seeing or even reading the play, knowing how it would haunt my dreams. Alas, I saw it last week and I’m still shaking  from fear (that it’s a true story and a recurring phenomenon in our neighbouring country), disappointment (in the citizens of Salem for being cowards and enablers), and hatred (of the girls who set the whole thing in motion). Soulpepper’s is a well-executed production and Miller’s text is (with the exception of some stylistic meandering that slows down act one) visceral. Both those things are horrible. Horrible. It means that I can’t laugh it off or nit-pick the details; every haunting truth and hateful diatribe and ignored plea for mercy lands with an expert thud and when they drag Rebecca Nurse to her death they’re dragging an innocent woman played with immeasurable intelligence and peace by one of the country’s greatest actresses (Nancy Palk). It’s horrible because it’s good (or, rather, effectively bad); Soulpepper makes Miller’s horrors inescapable.

The worst thing about the play is how good Hannah Miller is as Abigail Williams. She’s sadistically manipulative, unbelievably vengeful and way too smart for those things to be trivial. She’s the horrible ringleader throughout but it’s the moment when she turns on Mary that made me want to scream. Miller goes for broke with Abigail, diving full force into her twisted justifications and self preservation, making the character as captivating as she is detestable. Courtney Ch’ng Lancaster is another academy member who stands out. As Mary Warren, she plays one of the production’s most interesting 180s, progressing from co-conspirator and one of Abigail’s frustrating sheep to guilt-ridden whistle-blower to terrified victim of the very lies she once helped perpetuate. Mike Ross does a lot with the small role of Marshal Herrick, taping into the sympathy that most of the characters are lacking, but unable to do anything about the situation. Patricia Fagan is a strong Elizabeth Proctor and Oliver Dennis typically smart and likable as Reverend Hale.

Some of the most interesting casting comes with Derek Boyes as Reverend Parris and Joseph Ziegler as Deputy Governor Danforth. Both actors have a very sweet and compassionate presence, making their largely uncompromising parts in the sentencing of perfectly innocent women all the more haunting. Here they play men who are so “moral” that they can’t see the truth or listen to reason, but Boyes and Ziegler make them into authority figures that seem utterly trustworthy even when wrong. It’s great casting by director Albert Schultz (whose direction is overall effective and refreshingly subtle).

The standout, appropriately, is founding member Stuart Hughes as John Proctor. Hughes has often been hit-or-miss when I’ve seen him before because he’s somewhat rough around the edges and doesn’t have the unique presence of some of his Soulpepper comrades. But those features are perfect for John Proctor and Hughes is superb as the heart of the story. Proctor is easily overlooked and belittled as a less-than-upstanding citizen because he doesn’t tow the line as demanded in late 17th century Massachusetts. That makes him both an easy target and the man to see through the puritanical insanity around him. His conflicted love for Elizabeth, his guilt over everything from an affair with Abigail that traps him in his burning surroundings to not being able to save his wife, his ultimate self-sacrifice in the name of the truth- John Proctor is a worthy antihero in a play where the self-righteous are the devils and Stuart Hughes gives his best performance in years.

The Crucible is horrible and there’s just no getting around that. It makes your skin crawl and your eyes water and your pulse quicken with rage. It’s also a masterpiece of emotion-stirring theatre, both in textual form and as presented by Soulpepper. I hated it and almost every character in it, and I now sort of hate Arthur Miller for making me go through that (Albert Schultz too), and I certainly hate Hannah Miller for so brilliantly embodying one of my greatest fears (the casual liar with the power to eviscerate lives). I hate Salem, MA and Joe McCarthy and the entire country that enabled the unmitigated crimes perpetrated by both. But I was supposed to hate it. We’re all supposed to hate The Crucible and both historical moments it reflects, that way we’re prepared to stop it next time the witch hunt begins.